As a younger brother, l could feel the welts all over again when Jimmy Howard told this story. It really is the best way to see if a kid wants to play goalie.

Way back in the day, my brother and his buddies always had a street hockey goalie at the ready. My brother would just have me strap on the Mylec pads and they would pepper me for hours. No helmet. No mask. No cup. Eating endless shots of tennis and/or street hockey balls. And I fucking loved it. Because I had awful hands. And I couldn't skate for shit. So this was my in to play hockey.

I became a reliable street/road/gym/floor/roller hockey goalie for the next couple of decades and had a shitload of fun, won a few tourneys and trophies. 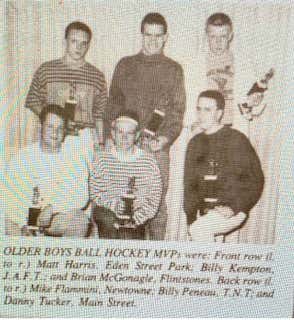 And it's all because Paulie Walnuts and his buddies used me for target practice as a kid. So don't be afraid to get forced to jump in there and see some shots. You could end up becoming the next Jimmy Howard. Or you could just end up having a blast playing net for the next several years. Shoutout to the Flintstones as well, love you guys.

Howie was a great guest with some fun stories. Caleb also joined us to talk about his attempt to become a golfer and his new show 51 Strokes.

Check out the full video version of Episode 326 of Spittin' Chiclets. It's good shit.

FULL VIDEO EPISODE: Picking Up A Stranger's Dropped Phone Underneath An Airport Bathroom U...

Full Video Episode: Dougie Gilmour And Pat Burns Mapped Out The '93 Leafs Season At A Stri...

Jack Eichel Is All Done In Buffalo Per Sabres Beat Writer

Experts: Brad Marchand Will Be In The Hockey Hall Of Fame

We Played Each Other In Mini Golf And It Was A Giant Mess - Pink Whitney Mini Golf Challen...

Bob Probert Shit On The Hood Of Shayne Corson's New Camaro Because He Was Being A Cocky Ro...

Coming From Someone Who Couldn't Hit the Broad Side of a Barn — The Pink Whitney Cup Skill...

Coach Troopz Warns Duggs His Team Will Get Put in 'Coffins and Urns' in Game 2 of the Pink...

Jimmy Howard Gave His Kids The Tennis Ball Test To See If They Really Wanted To Play Goali...

We Went To Jupiter, Florida To Play Golf & Watch Hockey With A Former MVP + #1 Overall Pic...