Last Sunday, NASCAR's Ryan Blaney made the 2021 Cup Series season his fifth consecutive season with a victory by winning the Folds of Honor QuikTrip 500 at Atlanta Motor Speedway…

That win gave Team Penske their first win of the 2021 season.

He sat down with me this week to talk about a SHITLOAD of topics, including his dad's inability to win in Atlanta after his tire flew off in the final lap 20 years TO THE DAY before Ryan took the checkered flag.

Ryan spoke about his relationship with BODY ARMOR and the time he sat down with Kobe Bryant.

We touched on his multiple forays into acting, including a bit part in one of the worst TV shows I have ever watched.

Then we spoke about dirt...

You can catch Blaney driving the No. 12 Ford Mustang for Team Penske once again this weekend, only this time there will be no asphalt involved as NASCAR presents the Food City Dirt Race at Bristol.

Ryan has limited experience racing on dirt compared to some other drivers competing this week… For example, Kyle Larson (who Ryan overtook on Sunday for the win in Atlanta) won DOZENS of races on dirt in assorted rides last year during his forced hiatus from Cup racing.

BUT Ryan's dad and uncle both started on dirt AND his grandfather, Lou Blaney, is a dirt track legend, so we explored the possibility of a deep-seated genetic disposition to excel on dirt tracks propelling Blaney to fuck over the overwhelming favorite Kyle Larsen (+250 on the Barstool Sportsbook) for the second time in as many weeks.

As is the case with all the drivers I have had the opportunity to interview this season, Ryan was a pleasure to talk to, and even though he has a win in the past 5 seasons, I am pulling for 2021 to be his first season with multiple first-place finishes.

PS- Even though I am not a big gambler, The Sportsbook has kindly boosted a bet for me this weekend for the first time ever… 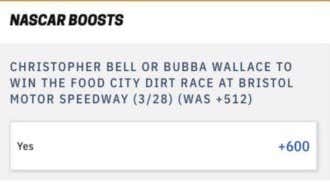 You can find it under "Odds Boost" in the EXCLUSIVES section of the mobile app, and now you can bet my old friend Chris Bell or Bubba Wallace to win on the dirt at +600… It was originally +512.