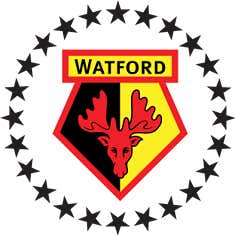 It’s Friday afternoon. TPS Reports can kiss your ass at this point. Beer o’clock is almost here. I know, I hear you.

However, before you go run off to your local watering hole and/or drinking cave and/or mom’s basement… and prior to getting all lathered up about the U20 World Cup (quarterfinal vs Ecuador tomorrow) and/or Women’s World Cup (USWNT starts Tuesday) and/or Gold Cup (USMNT starts 6/18)… it is time to take a little trip with me down memory lane:

It all began a couple of weeks ago when I took a red-eye to Heathrow and – after experiencing for the first (and probably last) time being picked up by a driver with “Barstool Sam” written on a little placard – I spent the next couple of days getting a firsthand look at what Watford Football Club is all about. I basically had my run of Vicarage Road, their gloriously refurbished 22K-seater stadium. I wandered through the dressing rooms. I lounged in the luxury suites. I saw the stadium’s innovative sensory room for young autistic fans. I meandered about the beautiful new training ground (and could have peed on Arsenal’s, which is right next door, but I decided to be classy and refrained). I played in a charity game on the immaculately manicured stadium field with a bunch of former players, including my fellow Sconnie Jay DeMerit (he’s basically me just a lot better in every facet of life). I wore Adrian Mariappa’s cleats during the game (then later took shots of tequila with him). I took a pedicab ride with Ben Foster (hate to say I really like the guy even if he is one of #TheWorst).

And yet somehow all that doesn’t even get to the most memorable part of the trip (even more so than walking into Wembley and seeing 90,000 people waving yellow/red and light blue flags – stay tuned for more on that): talking to literally hundreds of Watford fans about what makes their club so special, and why Americans – including those just getting into the sport and fans who have yet to commit their heart to one club – should think about making the Hornets (aka ‘ORNS) your dearly beloved team.

Trying to capture everything and bottle it into a video – even two! – would have been a tough task even for a seasoned storyteller, and I am definitely anything but that, but I tried to give it my best shot. Here is the first of two videos, this one focused largely on Watford the club and its people, with a second video to follow early next week digging more into the game day experience.

Big thanks to everyone at the club for having me over. First class organization that – in something that is probably truly unique to Watford – understands and appreciates Barstool and what we are trying to do on this side of the pond. Nothing but respect to them.

Also, a big thanks to those who have been following along all these years with the blogs, social media and (temporarily hiatus-ing) podcast… and now videos. It’s been a long hard slog but hopefully plenty more to come.