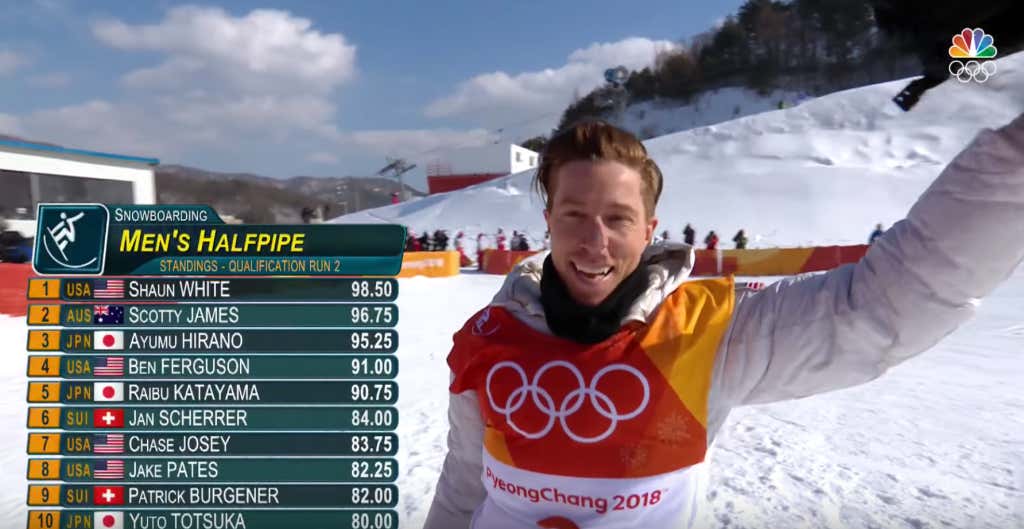 Shaun White is absolutely incredible. I swear he’s been snowboarding at the X Games and the Winter Olympics for 20 years. Every four years he somehow gets more and more air off the pipe, just redefining the sport and resetting the bar of what you need to reach to beat him. Last night was the qualifying run for the Men’s halfpipe and the debut of Shaun White at the 2018 Winter Games. Back in October Shaun suffered a brutal looking injury where the tip of his snowboard caught the top of the pipe and caused his neck and face to smash right onto the top. The result? SIXTY TWO STITCHES!! I mean when I saw this the first time I thought he died. It looks like his neck just snaps in half.

At the Olympic qualifier he posted a perfect score on his third run to get him into the Winter Games. Last night he got into a bit of an ego match with Scotty James as both of them had easily qualified for the finals with both of their initial runs. You’re not going to  beat Shaun White in an ego match. That’s part of what makes him the best snowboarder to ever live, he won’t settle for second in anything. As Scotty James posted a 96.75 on his second run, he shot to the front of the leader board ahead of White. On White’s final run, he decided he was gonna go all out.

These tricks don’t even make sense. How the hell does he get that much air? Dude pulled off a 1260 and landed it with pure ease. I’m not going to pretend like I’m an expert, but spinning around 3.5 times while in mid-air is flat out stupid. This was just qualifying so he could be at the top heading into the finals. It was a meaningless run, but Shaun White doesn’t let anyone beat him whether there’s a medal on the line or not. Tonight are the finals and they should be ridiculous. This is the peak of the Winter Olympics.