So in case you haven’t seen the story yet, Predators fan Andrew Fudge won free tickets to what I’m guessing is game 6 of the Stanley Cup Final. Only issue is Andrew won the tickets on Twitter and says he never checks his account (as if he’s still living in 2009).

It’s a funny little story and even if this makes me sound like a dick for saying, it’s always enjoyable to see things go slightly askew for people you don’t know on the internet. Same reason why you laugh your ass off every time you see somebody get drilled in the nuts. If it doesn’t happen to you, it’s funny.

Well anyways, SportsNation decided to talk about the story because it’s July and there’s nothing better to talk about during weekday middays. And whilst talking about the story, LZ Granderson decided to take a stab at this one and talk about how unfortunate this is because it’s “doubtful they’ll be back anytime soon”. How does LZ Granderson know so much about the Nashville Predators and how there’s not a chance they’ll make it back to the Stanley Cup Final despite not losing anybody of significance this year besides swapping out James Neal or Nick Bonino? Well because he used to follow the Nashville Predators when they were the At-lan-ta Thraaaashers. 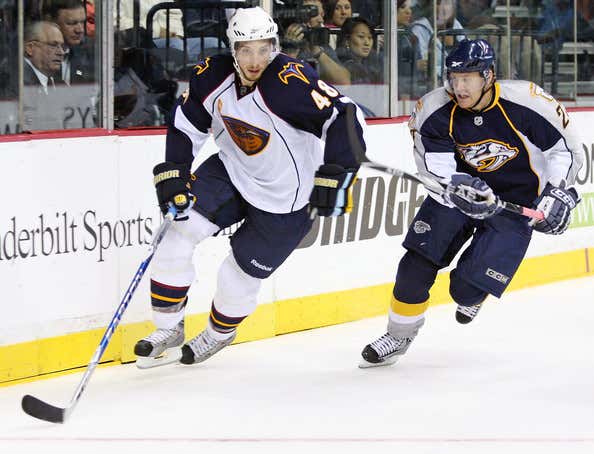 Now a couple of quick things that I’ll give LZ Granderson credit for. 1) That he even know the Atlanta Thrashers existed at one point. And 2) apparently he came back after the commercial break to correct himself. But still. This is ESPN. The Worldwide leader. They have a panel of 4 people on the air. One person erroneously says the Nashville Predators used to be the Atlanta Thrashers and not a single person corrects him on it.

That would be like Bob McKenzie hopping on NFL Insiders and talking about how he used to follow the Houston Texans when they were still the Tennessee Oilers. And even that would be a little bit better because the Tennessee Oilers used to be the Houston Oilers so it would be somewhat understandable how one could draw that connection. But the only thing the Atlanta Thrashers and Nashville Predators have in common is they are both southern cities.

So yeah. I know us hockey fans love to get all sorts of butt hurt over ESPN never giving hockey enough air time on their programs. But if this is what we get when you decide to let anybody besides Barry Melrose and Bucci talk about puck, well then maybe just keep ignoring the game. We’ll all be better off because of it.