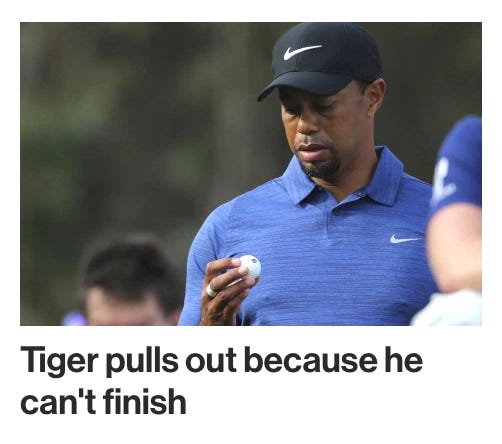 No real beating around the bush from the Post here. Just coming straight out with it. I mean I think the only more blatant headline they could’ve written would be “Hey Tiger Woods is famous for banging and pissing on hundreds of sluts and he just withdrew from a golf tournament.”

(kind of a fire headline if we’re being honest)

And so Tiger after 15 months off recovering from multiple back surgeries is now out with back issues.

.@TigerWoods WD's from @OmegaDDC. Agent Mark Steinberg said it's back spasms not nerve pain that forced him away from game for 15 months.

Who knows how serious. Who knows how “related.” Who knows if after shooting 77 he was like “fuck it it’s windy as hell today we’re not making the cut let’s high tail out of here.”