Things in the A.L. East are getting tight down the stretch. 23 games left for the O’s to make up the 2 games between them and first place Boston. While they still hold the second spot in the wild card race, Detroit is a game behind as the two start a three game set tonight. Winners of six of their last 10 games, the O’s had chances to sweep both New York and Tampa, but couldn’t wrap the series up. Even one sweep would have given the O’s a little more breathing room.

According to MLB.com, heading into Friday’s games the O’s and Detroit both have a 46% chance of making the playoffs. With Boston playing Toronto, New York playing Tampa, and Baltimore playing Detroit this weekend, the standings could look a lot different on Sunday night. As of right now Detroit, Houston, and New York are all within 2.5 games of the Orioles, and the Royals still have a slight chance, only four games behind.

The O’s don’t just have their sights on the wild card, the division is still fully in reach. They are two back of Boston for first. The Yankees haven’t lost since Wade Miley did his best Water Trash impersonation on Sunday, the Red Sox are back to playing well, and now the Blue Jays are slumping, this division is still up for grabs, and with the East just beating up on each other for the remainder of the season, why can’t the O’s win 8 of 10 and try and pull away? 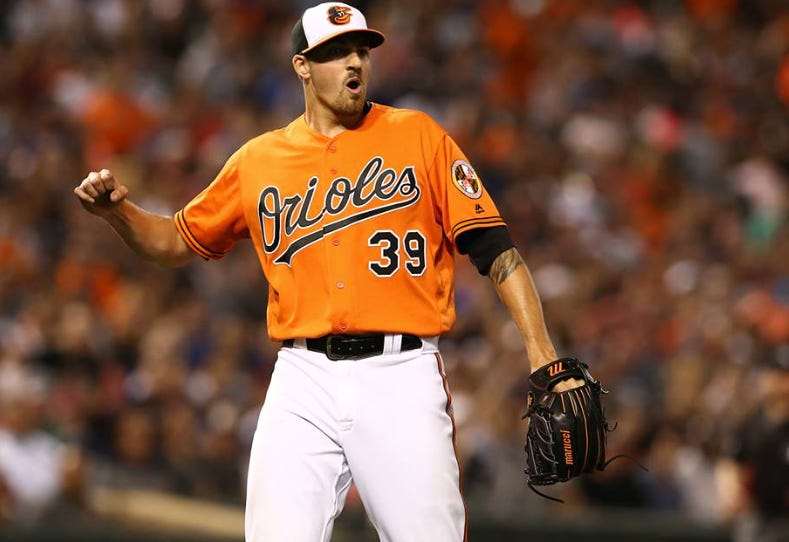 One guy who is going to be a key piece in the O’s attempting to make a division run is Kevin Gausman. It’s just like we all thought at the beginning of the year, he would be one of the O’s best pitchers at this point, but it was a different path Gausman took. He was good his first few starts he made after coming off the DL at the beginning of the season, 19 IP, 10 H, and 3 ER in his first 3 starts. He was 0-2 with an ERA 1.42 at that point. 9 of his next 15 starts he gave up 3 ER or more. The offense wasn’t giving him any run support then, and he was 2-8 with an ERA of 4.18.

Something clicked after Gausman’s horrible outing on July 29th against Toronto. In that game he gave up 6 hits, 3 HR, and 6 ER in just 3 IP. After that he tweeted “Better days ahead!!! Back at it tomorrow and I promise I’ll be better!!! Stick with us #Birdland”. His numbers since that start look like a guy who has figured it out.

Down the stretch, and with Chris Tillman out, Gausman has been absolutely money. This is what you want to see our of your young pitchers in crunch time. Every team in that chart is in playoff contention except Oakland, take that start away and you are looking at 36.2 IP, 8 ER, 31 H, 3 HR, 12 BB, and 43 K. Those are ace like stats. By the way, do you think the Yankees are tired of seeing Gausman? Against New York this season he is 2-1 with 25 hits, 32 Ks, 5 BB, 1 HR (A-rods last one), and 3 ER in 33.2 IP for an ERA of .080, completely shutting down the Yankees is one way to get the Baltimore crowd behind you. 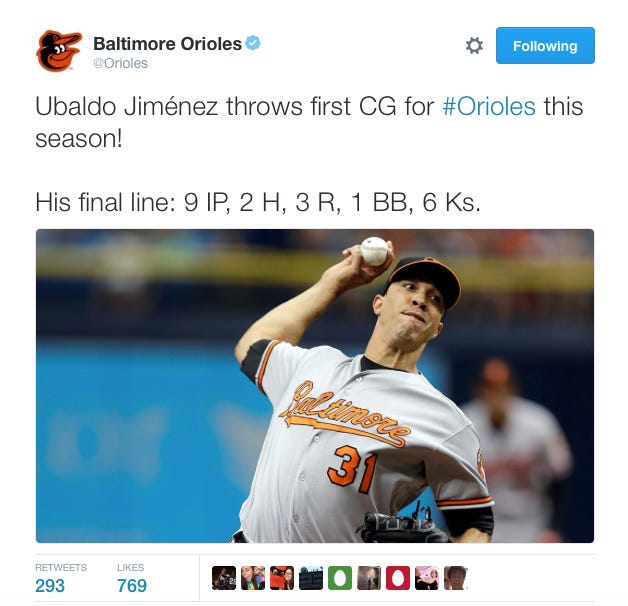 -I’ll eat this crow. Ubaldo Jimenez has been pretty damn good his last few outings. He tossed the first complete game for the Orioles in just over 2 years against the Rays on Monday. Jimenez gave up 3 to the Rays in the first and it looked like it was same old Ubaldo. He buckled down after that inning, giving up only one more hit in the game, and retired 25 of the 26 batters he faced. Just an insanely great game for him, and huge for this team. He’s been worse than dog shit this season and still has an ERA over 6, but over his last 4 starts he has posted a 2.70 ERA. As much as I shit on him, he has also stepped up with Tillman going down. If Ubaldo can just keep this going, not the complete games, but only giving up 2-3 a game, I think he has a chance to stick in this rotation and boot Yovani Gallardo for the remainder of the season. Keep proving me wrong, Ubie.

-Chris Davis has loved September so far, guy is raking. .444 with three bombs and six driven in. He missed a game due to his hurt left palm? Not sure how you injure that and I don’t think it’ll hold him out too long, but the O’s need to ride Davis’ hot bat. We all know his homers come in bunches, and he had 10 in August, if he can put up another 10 or 11 this month, that should put the O’s in a decent position to win down the stretch.

-It looks like Chris Tillman will make his scheduled start on Sunday against Detroit, hopefully he will be trying to lock up an Orioles sweep, but it will be huge if Tillman is back on Sunday. Adding Tillman back to the rotation with Gausman, Bundy pitching decently, and new Ubaldo, and that be a dangerous rotation.

-Darren O’Day threw on Wednesday, and according to MLB.Com’s Brittany Ghiroli, he felt no pain and felt good. O’Day will throw a simulated game next week, and if all is well, will rejoin the team after that. Adding O’Day takes the stress off of Brach, Givens, Drake, and Hart. O’s are adding two key guys in a key time.

– Manny Machado needs to be in the A.L. MVP conversation. If you don’t think so, you are an idiot. Guy has had the team on his back for weeks. If they can make a run and win the division, he will be a big part why, .307, 34 bombs, 90 driven in, and the best damn glove you’ll see in the league.

This obviously goes without saying, but this Detroit series is the biggest of the year, and could swing the O’s season in either direction. Taking a look at the remaining schedule for both teams, it would appear that the Tigers have an easier path to the wild card, with seven games left against the Twins, and three against Atlanta. O’s have series against four teams in the playoff race, while the Tigers have three remaining.