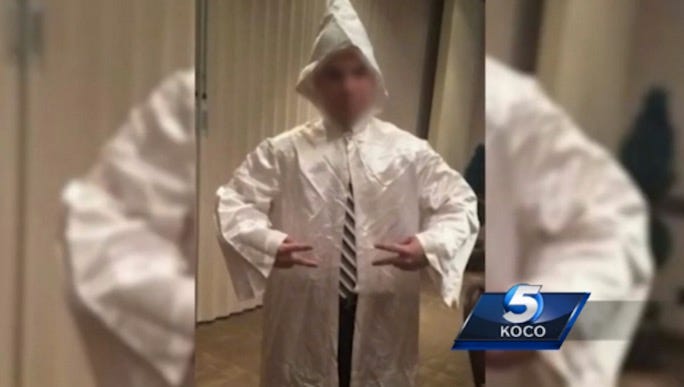 The picture was shared via Snapchat and also sent to an African-American student organization, which quickly began tweeting it and demanding answers from university leaders.

Tensions have been high at the university since the Sigma Alpha Epsilon controversy, where fraternity members were heard chanting racial slurs.

National and OU leaders with Alpha Sigma Phi said the photo was not racially motivated.

Fraternity President and Chief Executive Officer Gordy Heminger said this is a teachable moment for all involved.

“It was a student not thinking through how something would be perceived, especially with no context,” Heminger said.

He explained the chapter conducted an initiation ceremony over the weekend and part of it included robes of different colors used.

Heminger said moving forward, the group will not be using that robe for any public or private ceremonies.

Oh nice, wouldn’t be a day of the week without a campus controversy somewhere. Thanks to Oklahoma Alpha Sigma Phi for filling today’s time slot. What do we got? Oh a bro in a white hood throwing double peace signs? Niiiice.

So there’s a perfectly good explanation for it – well maybe not “perfectly” good, but at least not motivated by racism.

“Alpha Sigma Phi is excited to be a member of the University of Oklahoma community. In that spirit, we want to be honest and forthcoming on the actions of one of our members. This weekend, our brotherhood conducted the Alpha Sigma Phi Initiation Ceremony to welcome new members into our brotherhood.

After the ceremony, the marshal took a photo, wearing his ritual paraphernalia as outlined in our ritual book. The robes our officers and members wear are for both public and private ceremonies and can be seen as we conduct the many rituals of Alpha Sigma Phi, including our New Member Ceremony this spring, which we invite the campus community to join us. Our robes are varied in colors, including black, red, white, blue, purple and blue; each with meaning to our organization. The picture, without context, is troubling, which is why we wanted to explain to the community what happened. Our chapter is proud of the diversity in our group, and we apologize to anyone in the community who is upset by this picture.”

But the thing is, if you posed in a white hood like this, what the fuck do you think people are going to think? Knowing how much everyone hates frats, you really think they’re gonna say hmmm, better research the fraternity history here and see exactly what the context is? You’re a white dude in a white hooded robe that looks exactly like a fucking Klan outfit. I mean I hate fake campus outrage and social justice warriors as much as anyone, but sometimes you just gotta take a step back, consider what you’re doing, and decide if you’re being a damn moron or not.