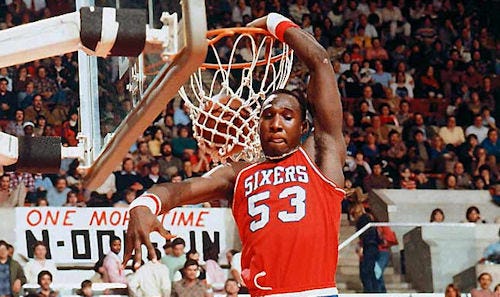 LV – Darryl Dawkins, known for his thunderous dunks and flamboyant nickname, has died. A source confirms that Dawkins died today. Following his professional playing career, Dawkins made his home in the Lehigh Valley. The 58-year-old made history in 1975, when he became the first player ever drafted directly from high school to the NBA. The Orlando native played 15 seasons in the NBA, spending the majority of his career with the Phiadelphia 76ers and the New Jersey Nets. In 1979, Dawkins shattered two backboards in separate games Following his retirement from the NBA, Dawkins – nicknamed Chocolate Thunder by Stevie Wonder – coached the American Basketball Association’s Newark Express and the Pennsylvania ValleyDawgs, which played in the Lehigh Valley as part of the now-defunct United States Basketball League.

Well, shit. I know DD was before most of our times, but you can’t deny the legacy this man left on the city of Philadelphia and the sport of basketball. Just an outright force on the court and, hands down, one of the greatest dunkers off all-time. Also, Chocolate Thunder is one of the greatest nicknames in all the land. Absolutely perfect. No idea if he was in poor health or what caused him to pass, but 58 is way to young to go. RIP Big Daddy D, #53. Dunk on.