It's funny how the mind is capable of moving on from the things that once meant so much to it. Time was when July 28th was a day on the calendar every Patriots fan would remember like they did the anniversary of some Adam Vinatieri Super Bowl winning kick or the other, or the Snow Bowl win over the Raiders, or the day Mr. Kraft saved the franchise from moving to St. Louis, or that blessed day when Bill Belichick celebrated his birthday with the greatest pick in the history of drafts.

I certainly did. Because 7/28 was the day Max Kellerman forever earned the name Cliff with that molten lava take above. So I would always mark the occasion, as Tom Brady's excellence continued and his championships accumulated. 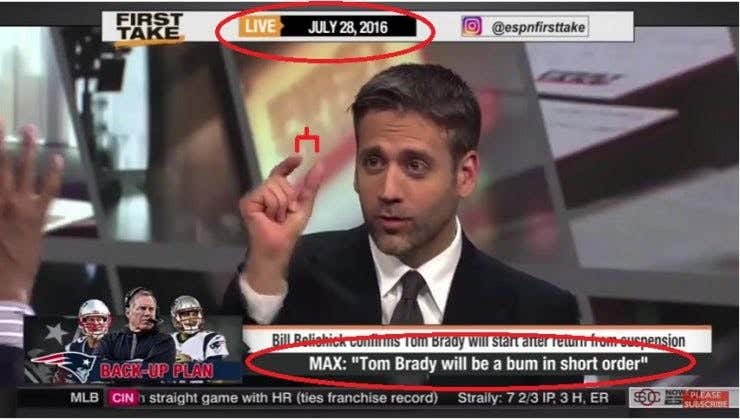 But things change. People like Brady move on. And with them, our interest in such remembrances. And yet in some small way, it's comforting to know that even though the man who owned our hearts for decades might have turned his attention elsewhere, he still remembers the good times we had. Specifically, the good times we had carrying out petty beefs with inconsequential sports talk show weirdos who are desperate to make an impact in a dying industry.

Tampa Brady is free to remember these past slights. And damn, if it doesn't feel good to watch him pull out the receipts.

As we get further and further removed from that dark St. Patrick's Day when the GOAT left New England and learn to move on, it's gratifying to know he has not forgotten the bullshit we went through with him. In spite of all his success in Tampa, we'll always share our obsession with these minor perceived slights. Throwing the wrongness of these insane predictions back in the face of the nitwits who kept making them was one of the true joys of Brady's epic run in New England. And will continue as long as there is a New England. But Cliff Kellerman's preposterous stance will stand head and shoulders above the rest. Always. I'm glad that even as I forgot, Brady hasn't.