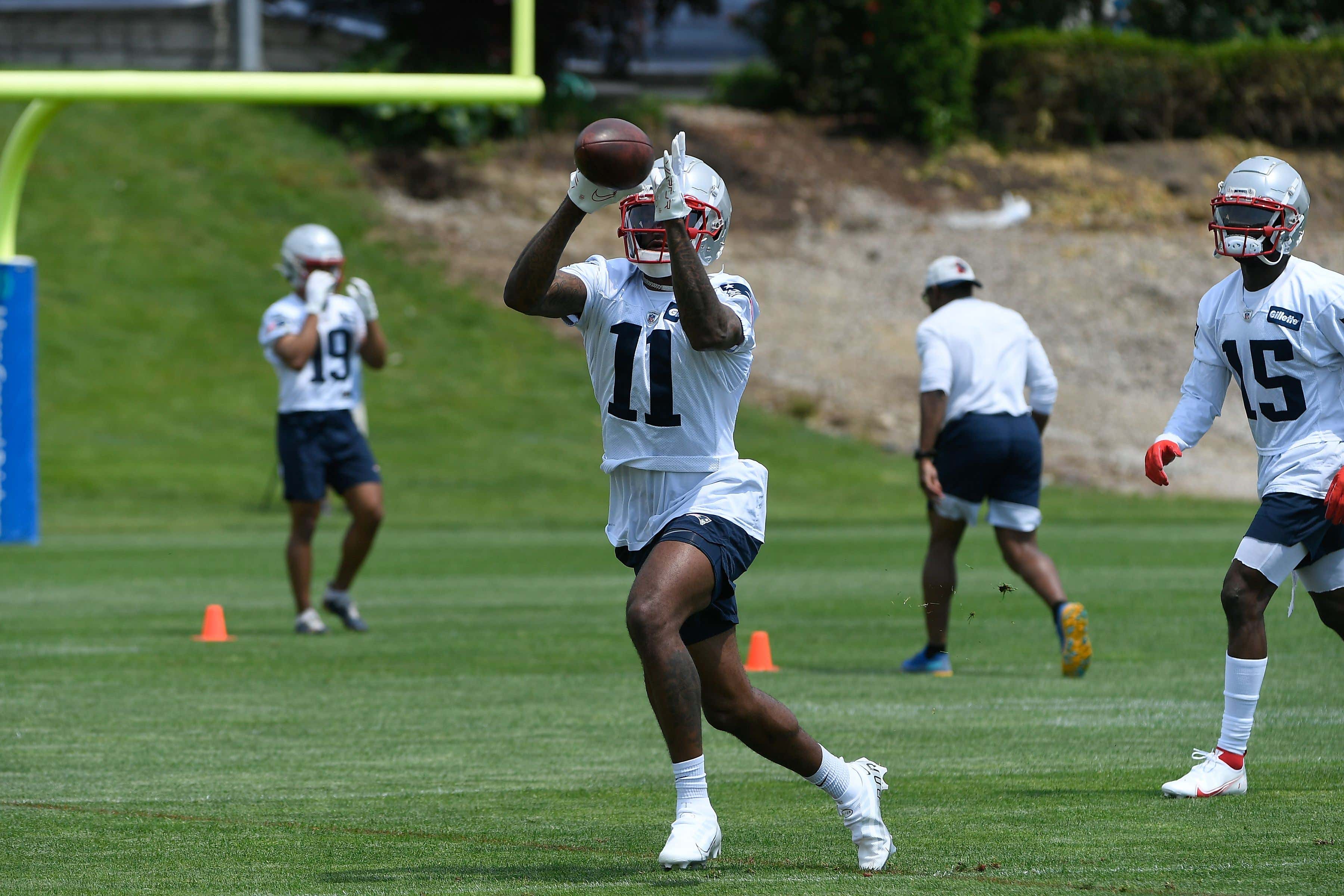 The latest in a series. Here are Volumes I, II and III.

Saying that the 2022 Patriots need to be better at the receiver position than the 2021 Patriots might seem like stating such an obvious point that it's not worth the pixels it's printed on. But that's not necessarily accurate. They were better there last year than you think.

For what it's worth, Pro Football Focus gave Mac Jones' targets the 7th highest grade in the league, ahead of even Buffalo, Kansas City and Tampa. Though that includes the tight ends and running backs, that's nevertheless higher than anyone would've reasonably guessed. And speaking strictly of wideouts, Jakobi Meyers and Kendrick Bourne were Top 35. And DeVante Parker was No. 42 in the league with Miami.

Additionally, Bourne had a preposterous 140.9 passer rating when targeted, second in the league to DeAndre Hopkins by only 0.5. And his reception percentage of 82.7% was also second highest, behind only Rondale Moore. So there's something to work with here.

Still, they need better. They need to find someone to approximate a true WR1. And this is not easy for me to admit. Not just because it requires me to type words and form sentences when I'd rather be floating in my white trash above ground pool. (Though there is that.) It's tough because I've spent virtually the entire 2000s devaluing the wideout position. Saying that it's basically a shiny, spinning object that draws everyone's attention but doesn't add a lot of true value. The equivalent of Spinner hub caps on your wheels. While the quarterback, O-line and tight ends were the engine and drive train that got you to the Super Bowl. Which is why the rings were always being won by low- and undrafted receivers like Doug Baldwin, Victor Cruz, and Julian Edelman (talented as those guys may have been). Essentially that the quarterback makes receivers great, not the other way around.

But part of my journey toward personal perfection is the ability to evolve as circumstances evolve. It's impossible to look at the teams that have made it deep into the postseason these last few years and not recognize that Bill Polian's peyote-induced fever dream of a world where championship teams are built from the outside-in is finally being realized. And to that end, the need for a primary target for Jones to emerge is a huge priority over the next six weeks.

Maybe for that reason, the Patriots have made it clear they have made changes to the offense. Both in its complexity and its scheme. Bill Belichick used the word "streamlined," as opposed to "simplified" or "so dumbed down that we wouldn't have to burn time off the play clock while everyone tells N'Keal Harry where he's supposed to be lined up anymore." I'm just speculating, but it seems logical that they assessed the failure of so many receivers to assimilate into Josh McDaniels' McOffense and decided it doesn't have to be graduate-level Calculus to be successful. That having Jones and his targets on the same page is preferable to 2000-2019 Tom Brady killing some wideout with laser beams from his eyes after every 3rd & incomplete.

Schematically the change was signaled with the release of Jakob Johnson, one of the few surviving professional fullbacks in the wild, and a huge part of their rushing attack. Johnson was third in the league among all backs in terms of run blocks. And he said publicly the team let him go because they're eliminating his position. Presumably in favor of more two tight end and three- and four-receiver concepts.

Which should open up more opportunities for the Pats entire receiver depth chart. Harry's New England career was put down humanely, with a trade to Chicago in exchange for a deep dish pizza in 2024. After handing out a lot of KraftBucks to Bourne and Nelson Agholor last offseason, GM Bill traded for Parker, giving him now one player on his roster to ever have a 1,000 receiving yards in a season (1,202 in 2019), Then he drafted Tyquan Thornton in the 2nd round out Baylor, who steps onto the practice field as likely the fastest player in franchise history. You only invest that much capital upgrading a position unless you disagree with PFF's assessment, you think it's becoming increasingly important, or both. I'm guessing both.

Agholor's less than 500 receiving yards and less than 13.0 yards per reception were less than underwhelming. Meyers, while starting at slot receiver (a position that is now loaded with some of the best talent in the game), was 5th among all slots in targets, but just 10th in catches, and a dismal 38th in passer rating with 78.3 when targeted. The point being that there's room - make that need - for improvement. And for guys to move up the depth chart, regardless of their salary, pending free agency, or draft status.

And here is why it's so vital. As a rookie, Mac Jones feasted on zone coverage, where the emphasis is on timing, anticipation, and reading the defense. But relatively speaking, he struggled against man coverage.

Some will make the case that's because Jones is an unathletic system QB with noodle arms attached to his doughy dad bod. I'll argue it's about his receivers' lack of ability to create mismatches and win 1-on-1 battles. There's no Gronk or Randy Moss here you can split out wide to identify single coverage all around and then pick your favorite matchup. And in all likelihood, the Patriots can count on seeing more such coverages until Jones and his wideout corps can make the bastards pay for their insolence.

Ideally, the offense will continue to be built around a ground game that features Damien Harris and Rhamondre Stevenson. The reason being that their strength last year was winning the run battles, forcing teams to load the box with a robber safety, then letting Jones attack single safety coverages (Cover-1 and Cover-3). His two most effective areas of the field to attack were outside the hashes one either side of the field, between 10 and 20 yards:

Deeper than that and his numbers fall off, as numbers are prone to do beyond 20 yards. Being able to stress coverages deep with Thornton's speed and a hopefully improved Agholor would help that. But I truly believe it's going to be more about guys getting open against the increasingly man-to-man looks Jones will face, then - and this is a concept foreign to Harry, making the contested catch. Which has been a specialty of Parker's throughout his career:

For all these reasons, I believe the key to this whole grand experiment is going to be DeVante Parker emerging as Jones' favorite target. A true WR1, as he was three seasons ago. He doesn't have to put up those kinds of numbers. This is still going to be a committee approach and the ball will be distributed. But they're going to need him to establish himself as a player that has to be accounted for in the opposing game plan. Not spectacular (though nobody will refuse it). Not taking the top off of anything (save for the occasional jar for the woman in his life! Amirite, guys???). Not stretching defenses as much as being reliable. Just becoming that dependable veteran presence Jones can count on in have-to-have-it situations. That moves everyone else down the depth chart and relieves the pressure. And if we get to the point where Jones' favorite receiver is the same as Brady always claimed his was - the open one - this offense can become what it needs to be for a playoff run. My lips to God's ears.