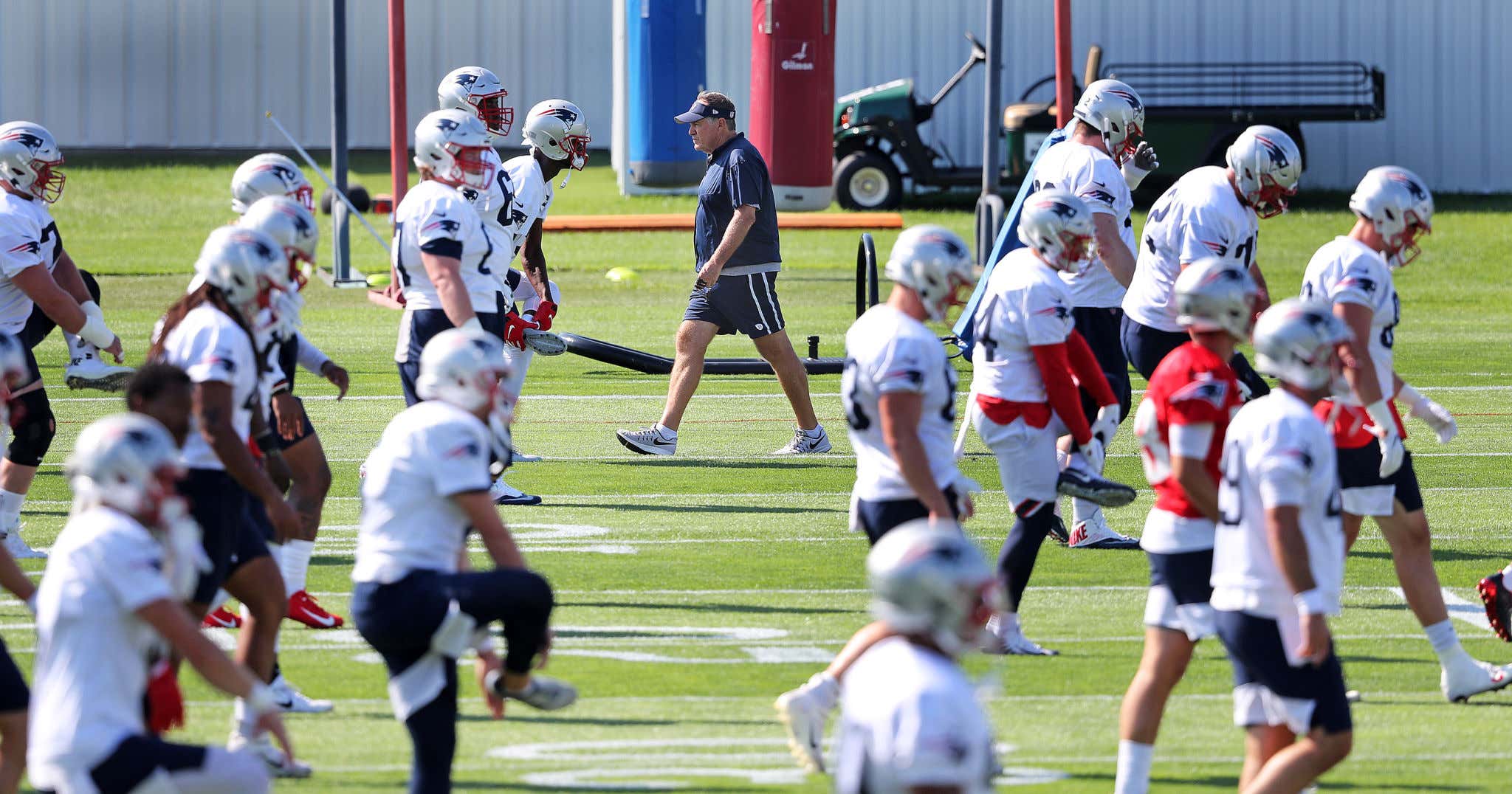 We are just past the halfway point of perhaps the best month on the calendar. And while I enjoy Home Run Derbies, All Star Games, Open Championships, and people competing to see who can digest the most obscene number of tubes made from pork snouts and entrails as much as the next sports fan, to me July means the start of NFL training camps. It's as much a part of my summer as sucking in my pasty white, almost translucent, Irish gut at the beach.

I don't know when exactly I visited my first Patriots camp. But I can tell you it was at Bryant College in Smithfield, RI, long before they moved it to the fields behind Gillette in the early 2000s. I also can't tell you the last year I didn't go to one. But my guess is I've never missed one since it's been in Foxboro. And the one constant about Pats camp is that, no matter the year, the prospects for the season or the quality of the roster, storylines always emerge.

Take for example, 2001, when I brought my then 5-year-old son. The Pats were coming off a 5-11 season. Bill Belichick was still in a rebuilding stage after the disastrous Pete Carroll/Bobby Grier, building his roster around obscure, low cost free agents like Mike Vrabel, Joe Andruzzi, Mike Compton, Anthony Pleasant and David Patten. Terry Glenn was in the throes of one his frequent and legendary hissy fits, pretending to have a pulled hamstring, and spent the practice on the stationary bike riding the Tour de Sideline. At least two dozen fans showed up wearing the jersey of backup quarterback Michael Bishop, the best August player I've ever seen, who would go on to get released later that year. First by the Patriots, then by a CFL team. And no one paid much attention to Drew Bledsoe's other backup, No. 12.

All of which a long, windy drive up the Premise slope, so let me finally get to the summit of Mount Get to the Point. Patriots Camp 2022 begins next week. There will be many narratives coming out of it. Decisions to be made. Roster spots to be earned. Depth charts to be determined. Coaching situations to be straightened out. As we count down the days, I'll lay out what the biggest stories should be.

Beginning with this one, my choices for the biggest sleepers. The three lesser known, roster bubble guys I expect to establish themselves, earn playing time, and play significant roles. On a team that has a long consecutive streak of UDFAs making the final roster and prides itself on discoveries like Malcolm Butler, Jakobi Meyers and JC Jackson, these are guys you'll want to be keeping an eye on throughout: 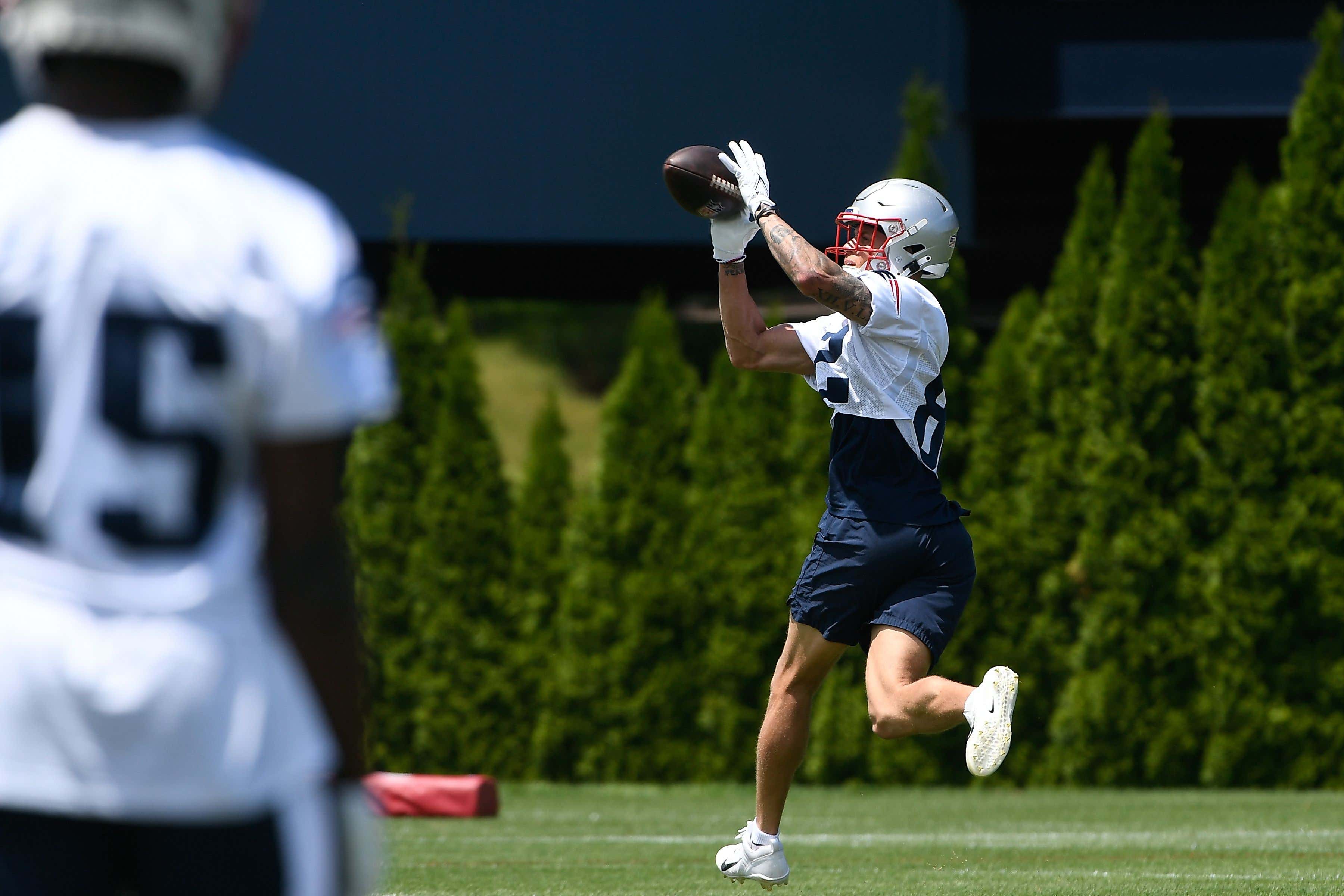 Nixon never saw the field as a redshirted rookie after being drafted in the seventh round (242 overall) out of UCF. His name is most familiar to casual observers as the answer to the trivia question, "Who was the final pick of Ernie Adams' career?" And according to Madden, he's the lowest rated Patriots receiver, with just a 64. But in spring practices, Mac Jones seemed very much aware of who he is. And kept finding him, early and often. Here's what I wrote after a minicamp practice:

His highlights on this day were a couple of deep balls to Tre Nixon, who of all people is starting to look like a favorite of Jones. He hit Nixon right on the palms on a corner route against Shaun Wade early. And late, he lofted a perfect deep touch pass into Nixon's bucket over Jonathan Jones, which Nixon hauled in with one hand while fighting off JoJones (it's going to take a lot of effort to differentiate our Joneses this year) DPI with his other.

Granted, Nixon has his work cut out for him. They're going to need extra chairs in that wide receiver room, even with N'Keal Harry gone. But given the fact they've eliminated the fullback position, we can expect a lot more four-wide and even empty backfield sets, so there should be opportunities. And getting back to the Madden ratings, (for what it's worth), Nixon has the third best speed rating on the depth chart, behind only Tyquan Thornton's 4.2 Combine time and Nelson Agholor. Based on the emphasis the team placed on speed on both sides of the ball in the draft, it seems like a change in their core philosophy might be in the making, and give a guy with his skillset a legitimate shot to play quality snaps.

Ray was arguably the best prospect coming out of the state of Alabama in 2017. A five-star recruit, the 26th ranked prospect in the 247Composite and their No. 1 strongside defensive end. But he fell out of the draft due to injuries limiting him in three of his five seasons for Nick Saban. Last year he missed the opener against Miami and that big rivalry game against Mercer, before playing all 13 of the remaining games, albeit in a limited role. He only made 11 tackles all season, though three of them were for a loss and he added a sack. But in his last full, healthy season of 2018, he had 39 tackles, six for loss, and 2.5 sacks. He fits the profile Belichick likes off the edge, with his 6-foot-5 frame carrying 285 pounds. And can play as either a two-gapping 3-4 defensive end or inside as a space-eating tackle. Someone told me he was Christian Barmore's roommate at Bama, but I cannot confirm. Nor will I argue that the idea those two spending their nights watching This is Us together gives him a leg up on his competition. Just that his familiarity with Saban's system plus the raw potential he showed coming out of high school does. If he can show he can stay healthy and harness some of that big-recruit energy he displayed five years ago, there could be a role for him in the Patriots rotation-heavy front.

Credit where it's due to my brother Jack for putting this guy on my radar. And for the comparison to Stephen Neal, who had a nine-year career in Foxboro despite never having played football in college. Desjarlais did, in fact, play in school, at Windsor in Ontario. But he draws comparisons to the former wrestler Neal (the only man in the NCAA to defeat Brock Lesnar) for the explosive way he puts 300-pounders on their ass. I mean, look at how many times he earholes guys. How often he's running them off plays 10 or more yards upfield like he's pushing them on ice. The way he keeps grinding right up to the whistle. This guy is 6-foot-2, 313 pounds of pure ferocity who played 18 games as a rookie, followed by 14 games in a shortened 2021 season in which Winnipeg won the Grey Cup. Granted, it seems as though the two guard spots are locked down by top pick Cole Strange and 2020 camp sleeper Michael Onwenu. But like in the case of Neal, or German-born Jakob Johnson (I don't include Sebastian Vollmer because they didn't exactly pluck him out of obscurity in the second round out of U. of Houston), this personnel department loves scanning the four corners of the globe for tough, hard-hitting studs other scouts overlooked. I cannot wait to see Desjarlais operate when the pads come on and they actually get to hit. Especially in joint practices and Fauxball games in mid-August.

I will never wish summer away. Not one day of it. But I'm really looking forward to this.