Jordie already covered this from the Phillies fan angle (act like an idiot in Philly, get treated like an idiot in Philly), Smitty broke it down play-by-play & person-by-person ("It's a Philly medley of degenerate"), and Clem covered it from the Mets perspective because he "felt the need to weigh in on this as a Mets fan considering one of my own had to go to the Verizon store this morning because his phone was launched onto the field". But why not add a fourth blog in the mix? Isn't that the Barstool way? And I haven't quadruple blogged anyone in a while so here I am.

Obviously the most enjoyable part of this whole thing was the man with the 'Delco accent' (did anyone else think he sounded like an old man Bam Margera?):

Ack-shally, I think the en-dire stay-dium'sss laughin' at you, dickhead, yo, call me when you get yer phone.

And I enjoyed it so much because Mets guy seemed really, truly hatable not even so much because of the 'taunting' with his phone moment, but based off this quick moment... the stupid smile paired with the double thumbs up at Delco guy: 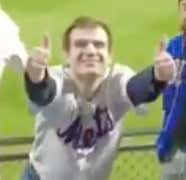 It's just a smarmy, obnoxious lil punchable face. But Goddamnit… terrible news. In reality he doesn't seem like a punchable guy.. Kevin Kinkead of Crossing Broad called him up and alas, he seemed pretty chill:

In the full Crossing Broad interview which I highly recommend you read HERE, he says,

I’ll admit that I would be pissed off, too, if someone was putting their phone in my face like that, but me and this guy had some heckling going back and forth the whole game, and I just wanted a good cap on the content, to show who the victor was.

He even went on to thank the ground crew for getting his phone back & others for dealing with the mess of it all. Ugh. You hate to see it. Really, REALLY don't want to like this guy.

Hopefully Philly phone thrower makes his way up to enemy territory for Barstool at the Ballpark this month & we can see the two make amends (or if the game is slow enough, another fight) over some beers & nooners.