Jordie went through the basics from the video already HERE - but there is far more than what initially meets the eye. In fact, you could, nay, should take a screenshot of every character/creature from this minute clip and send it to Vienna to be studied. It's a Philly medley of degenerate, so let's see the Top 5 (Jordie already touched on the dude in the cast trying to pull the citizen's arrest...but...why?):

*Also not even acknowledging the Mets "victim" who decided to shove his phone in someone else's face to talk shit in Game 6 of 162. Keep it in your pants, man, even if former Mets GM's cannot. 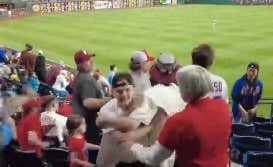 Ah the ol' smirk and go. Solid instinctual instincts chucking the phone into Hades/wherever Mets contracts go to die, but he knew to flight immediately. Word on the street this is a Chester County spawn, which makes sense. Those growing up in Southeastern PA may start the shit, but there's always plenty of Delco/NE/South Philly batshit enough to finish it off. It's called playing chess instead of checkers introducing yourself to Seamus McCaffery. 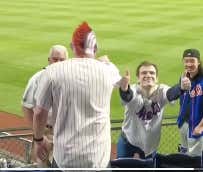 The Philly Face Paint guy with the AGGRESIVE point! I can only imagine a Dad-worthy scolding not seen since my father referred to 17-year-old Smitty as a "Douched Giraffe Pussy" for running out of gas in the left lane of 202 (in his defense, he was correct). If there's one thing I've learned from all my years involved in the Philly sports scene, it's this: You don't fuck with the middle-aged men who wear facepaint to games, let alone the ones who go all out for Flyers games when they're 900 points out of playoff contention and also wear shoulderpads to Eagles games. Those are the types of cats who have nothing to lose.

PS - Philly Sports Guy is getting Mickey Morandini, Kevin Stocker, and others together in Delco on Saturday, April 23rd for some drunken wiffleball in support of charity. I, for one, am all in. At least until the cops show up…and subsequently join in the action. 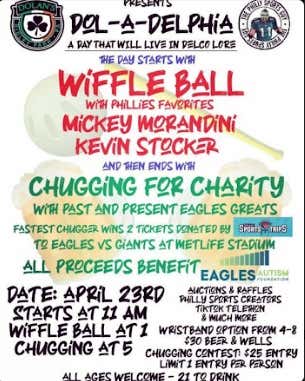 3) The Greatest Security MLB Has To Offer 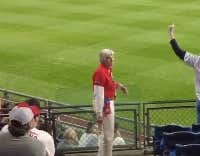 Betty Sue has been roaming the aisles since Dick Allen was hitting bombs out of Shibe Park. She doesn't deserve this shit. These are supposed to be her Golden Years yet it's been over 11 years since she's seen a damn playoff game. Keep the wannabe KFC's up 95 and away from our retired CCD teachers attempting to keep peace at the Bank.

Not only does he capture the entire sequence for our viewing pleasure, but the "Go go" towards the fleeing fugitive means his heart is in the right place. Plus that accent. Holy Delco God.

"Actually…I think the entire stadium is laughing at you DICKHEAD. Yo call me when you get your phone."

Someone is lining himself up to be the next young buck to get bagged by Mare Of Easttown. Guaranteed.

Absolutely LOVE this Mama. Holding one kid by the hand with another toddler in her arm and she STILL gets off the free "Bye Bye". Talk about tenacity. Now this is the kind of gal you take to your Uncle's funeral party at Barnaby's in Ashton and let her leave with more than one "In Memory Of…" ashtray. Enjoy the week Wildwood this Summer with the kiddos, Mama. You've earned it. We'll see you at Raging Waters, assuming the water isn't overrun by Central League dropouts and the Clap. Which is a big assumption.

Gotta love this town, even if I Fucking Hate This Place - BUY A BARSTOOL PHILLY T-SHIRT NOW!!!