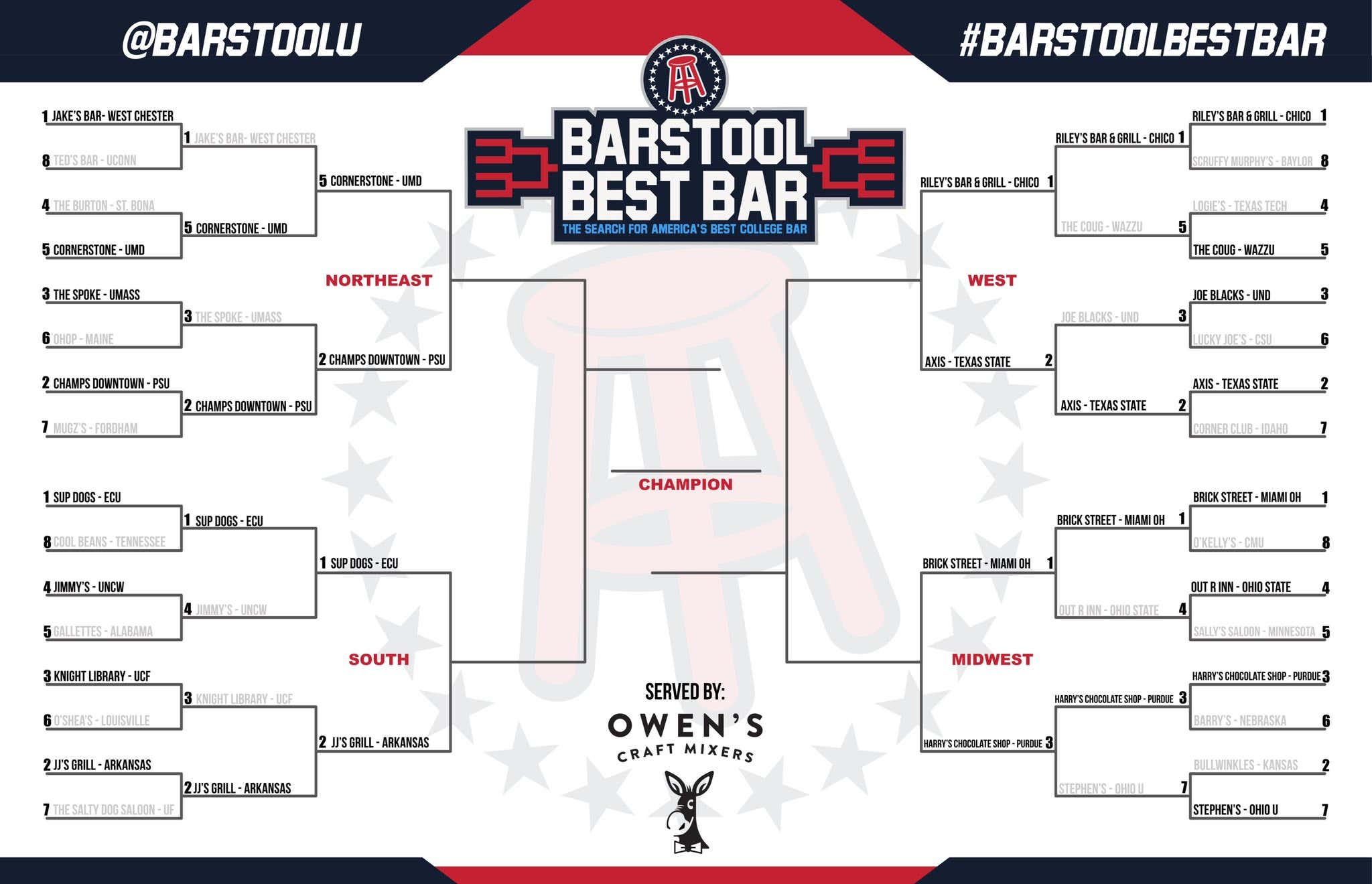 The 4th annual Barstool Best Bar competition is into the Elite Eight. The Best Bar competition has given us some incredible memories through the years from T-Pain to Carter Cruise to Pup Punk to the Jonas Brothers. This year, the prize up for grabs is $10,000 to the bar, a stop on Chickenfry's tour, and some gifts from Owen's Mixers.

Sup Dogs (at East Carolina University) has become a legendary bar thanks to this tournament. To celebrate their 2019 victory, Pup Punk and T-Pain came for a concert and Carter Cruise was their #1 supporter. 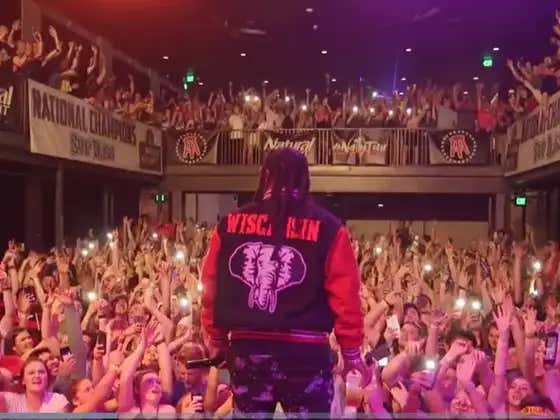 After winning the two inaugural competition in 2019 and 2020, Sup Dogs had become had a household name and seemed like an unstoppable force…..

Riley's at Chico State defeated Sup Dogs in the championship to prevent the three-peat. This year, they could be meeting again in the championship around if both take care of business. We're down to the Elite 8 and you can see the bracket above. I'll be breaking down the matchups below with all info on how to vote. Voting for this round closes Friday at 3 PM.

What can be said about Sup Dogs that hasn't already been said? They're a powerhouse looking to officially become a dynasty. They haven't been tripped up by any Cinderella's along the way and seem to be back with a vengeance after losing the title last year. But can the 2 seed JJ's take them down?

Some things that make JJ's unique:

- Happy minutes (instead of a happy hour, they have 3 20 minute blocks of specials per day)
- $1.99 margs since 2008 (just an absolute steal and about $15 cheaper than NYC prices)
- Staff wearing cowboy boots and denim is a tradition we’ve held since day 01 as well

But I don't know if it's enough to push JJ's over the edge. Sup Dogs is on a mission that won't be stopped here. Don't forget they also have an inspiring story you can watch here.

To vote for Sup Dogs, use #BestBarSupDogs or buy their t-shirt which counts for 7 votes

To vote for JJ's Grill, use #BestBarJJs or buy their t-shirt which counts for 7 votes

Champs is another star-studded bar. It opened in 2017 and was christened with a performance by Joe Jonas and DNCE and has since been visited by A$AP Ferg, Wale, Waka Flocka, T-Pain, Logic, Jeremih, Kane Brown and also Ria, Fran, and Bri.

They also seem to be winning the Twitter war.

And while Cornerstone does have Nate on their side, I'm not sure he alone can take on all these A-listers. Champs is gonna move on here.

To vote for Champs, use #BestBarChamps or buy their t-shirt which counts for 7 votes

To vote for Cornerstone, use #BestBarCornerstone or buy their t-shirt which counts for 7 votes

Riley's is the defending champion. They put Chico State on the map last season, which I had never even heard of until a year ago. But god damn do these people love their college bar. They seem to have a great sign too.

This tradition sounds awesome as well

There is a long tradition for the Chico State seniors to “graduate” from Rileys with a whole ceremony early in the morning before the bar even opens. The owners Kevin Riley and Nick Andrew are always there and will give speeches, as well as the “class valedictorian”. All those who participate receive a certificate and a stole, plus a fabulous morning of drinking with your best friends. To even sign up to participate in the Riley’s graduation, the seniors line up OVERNIGHT on the sidewalk in front of Riley’s one night- months in advance just to put their name on the list.

And they have the support of Aaron Rodgers, although they may not want it given his proclivity for choking in the playoffs.

Axis is gonna have their work cut out for them to take down this powerhouse. I don't think it happens.

To vote for Rileys, use #BestBarRileys or buy their t-shirt which counts for 7 votes

To vote for Axis, use #BestBarAxis or buy their t-shirt which counts for 7 votes

Brick Street appears to be on a mission this year. They've had a bunch of celebrities come through like oPst Malone, Morgan Wallen, Luke Brian, Lil Dicky, Sam Hunt, Quinn XCII, and others. And also have college bar classics like Beat the Clock, Late Night, Country Night, and Karaoke night. Also this video is cool.

But I will say that Harry's Chocolate Shop is an awesome name for a bar. Although I'm sure Purdue students might be more focused on their basketball team being in Sweet 16, so we'll see how much time they have to vote for Harry's. Whereas if you're going to school in Miami of Ohio, you probably have nothing better to do. For that reason, I'm going with Brick Street moving on.

To vote for Brick Street, use #BestBarBrickSt or buy their t-shirt which counts for 7 votes

To vote for Harry's, use #BestBarHarrys or buy their t-shirt which counts for 7 votes

Voting ends Friday at 3 PM so go vote for your favorites.