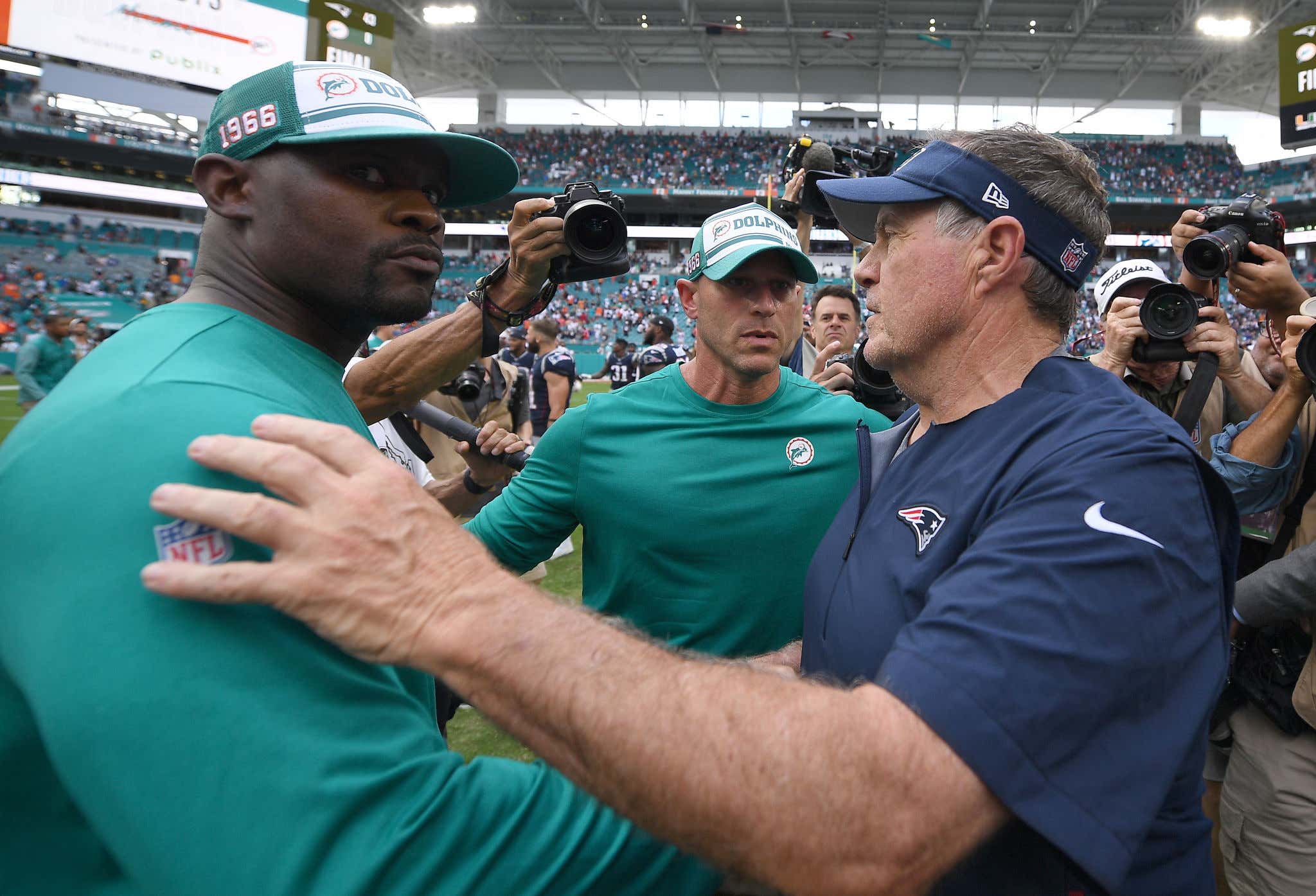 Maybe I've got a New England bias that clouds my judgment of everything (though no one's ever accused me of being too pro-Patriots, so I don't know why I brought it up), but one of the most interesting aspects of the Brian Flores lawsuit is how quiet the NFL itself has been about it. Sure, we've had denials from some of the teams and individuals named in it.

John Elway denies he was in the Grip of the Grape when he met with Flores in a Rhode Island, as it was alleged.

The Dolphins have issued one statement of denial that was so vague and non-specific it might as well have been barked out by an actual dolphin. Although the league hasn't had much at all to say about one of their owners allegedly offering his head coach $100,000 for every game he tanks. Or, for that matter, Hue Jackson's claim he was getting bonuses for losing while he was perfecting the art in Cleveland. As a federal judge once said, corrupt kleptocrat Roger Goodell "dispenses his own brand of industrial justice." And it would appear these owners have immunity from prosecution that others do not.

And as far as the Giants, they issued a lengthy response in which their denial was more specific.

[T]o base that allegation on a text exchange with Bill Belichick in which he ultimately states that he "thinks" Brian Daboll would get the job is irresponsible. … Mr. Belichick does not speak for and has no affiliation with the Giants. Mr. Belichick's text exchange provides no insight into what actually transpired during our head coaching search.

The last we've heard from Flores - and his breaks from talking about this are few and far between - he's not only digging in on the idea Belichick knew whom the Giants were hiring, he's pushing his chips on the table and betting Belichick was one of the decision makers:

Pro Football Talk - “I think there are back channel conversations and back channel meetings that are had that oftentimes influence decisions,” Flores told Jay Williams of NPR’s podcast The Limits. “I think [the Giants hiring process] is a clear example of that. Bill Belichick is a clear example of that. His resume speaks to that. It was clear to me that decision was made with his influence. That’s part of the problem. That needs to change. There needs to be a fair and equal opportunity to interview and showcase your abilities to lead and earn one of those positions.” …

On the surface, it’s odd to think that Belichick would have influence over the hiring practices of another team. That said, there definitely was chatter on the NFL grapevine that Belichick steered the Giants toward Joe Judge not Josh McDaniels in 2020. As the theory goes, Belichick wanted to keep McDaniels.

The difference is obvious. Two years ago, both assistants worked for Belichick. Flores and Daboll used to work for Belichick, but they currently don’t. That said, Belichick benefits from having Daboll leave a division rival.

I love it. Lord help me, I love it with all my heart. The other day when people were saying Belichick sent those texts on purpose in order to blow up the Dolphins, Bills and Giants with one simple text bomb, I said that he occupies more square acreage in America's collective head than all land the Queen of England owns. Well reading this it's clear he's put red plastic hotels on every piece of property. And the price of everyone's rent is going through the roof.

So he's more than the GOAT of coaches. He's a kingmaker. Robert of House Baratheon, deciding who gets to sit on what throne throughout the Seven Realms. Moving his pawns around the board to suit his purposes. Two years ago, he had to send one of his hands to New York, so he chose Joe Judge, knowing he would weaken them and Josh McDaniels was still useful. This year, Flores gets fired, so he's no longer a threat. But Daboll's offense has become a problem, so he arranges to have him stationed in the NFC East. Now McDaniels becomes expendable because he can always rehire Bill O'Brien, and Dave Zeigler went to Las Vegas with him as revenge for the Raiders firing his buddy Mike Mayock. And he's so powerful none of the above realize they're being played. It's diabolical.

Of course, one could argue that recommending your assistants for promotions elsewhere is not just a kindness and a show of loyalty toward them, it's how Flores got a head coaching job in the first place. But that's boring. And too simple. I'm going with Flores theory that all these jobs are getting filled to suit Belichick's evil purpose and help the Pats win that seventh banner that's eluded them for three whole seasons now.

I still believe the NFL will figure out some way to take draft picks away from us in all this. But if Flores' theory is correct, it's probably worth it.