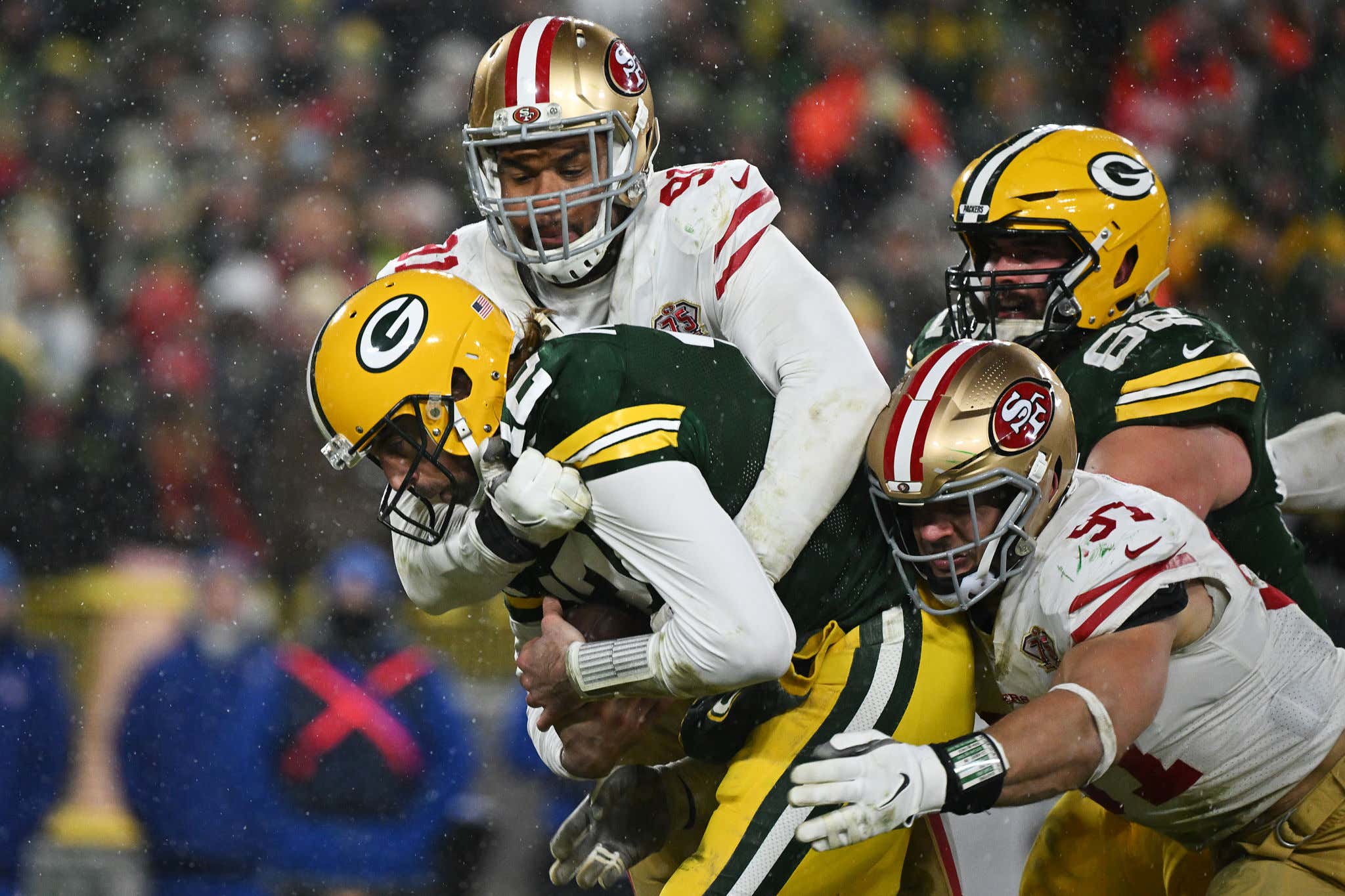 It's three thirty in the morning and I have a blistering headache. I know this kinda headache. I felt it after Freddie Mitchell in 2003. I felt after Lawrence Tynes sucked the remaining life out of me in 2007. After Brandon Bostick couldn't recover a fucking onside kick in 2015. Brady last year. Oh yeah and any time the fucking San Francisco 49ers line up against the Pack in January. Every goddamn time with those motherfuckers. The moment I realized this was going to be the matchup I knew it was going to be hell. Just a nightmare of personnel and schemes that the Packers don't handle well. I wanted to believe this year would be different, but it ends all the same. Pain.

Honestly don't even give a damn if you read the blog or just skip right to the comments, I'm typing this strictly to vent. Liz already blogged the game and I'm sure you've read it by now. If not, have at it here. It's probably not the best remedy for a splitting headache to stare into a laptop screen, but solid health choices are not my forte by any means, so here we go.

Let's start with the obvious — special teams. If you followed this team throughout the season you knew this was a problem that would rear its ugly head in the most important time. Well, it fucking did!

All season long that unit gave up long punt/kickoff returns, failed to get anything out of our their own returns, and produced horrific operation with field goals and extra points. They ranked dead last in special teams. You know how hard it is to be worse than the Jets at something? They're barely considered an accredited football team and they still bested Green Bay in that department.

It was so painfully obvious that a change had to be made and with the division locked up early there was absolutely time for that to happen.  LaFleur dismissed that potential change right away about 6 weeks ago.

Awesome, Well the Niners only touchdown came off a blocked punt and Green Bay left three out there to end the half on a blocked kick that really swung momentum. Really, really bad especially when those were issues all season long. No one to blame but themselves there. Cherry on top was having only 10 men out there for the final kick. Maurice Drayton has to be the single worst person to ever do a job in Earth's history.

Special teams were awful, but that's not the only reason the Packers lost this game. The offense was a complete no-show. Despite another MVP season, Rodgers was once again pedestrian when it mattered most. You expect this dude to be special in these moments and he just wasn't.

There were factors that certainly played into that if you wanna go the excuse route. Going into this game you didn't expect Green Bay's makeshift o-line to give Rodgers the whole day to throw.  Bosa and Armstead mauled guys on the line and hurried 12 with his throws all night. With the snow coming down, Packers WRs had a lot of trouble getting separation in the second half. Combine those two and it's going to be tough for a quarterback to make a play, but Aaron Rodgers doesn't get to make those excuses. He's the likely back to back MVP. You have to find a way to move the ball and put points on the board at home in the playoffs. He didn't.

The 4th quarter drew similar comparison to last year's final game. Last year Tom Brady practically begged the Packers to beat him in the 4th quarter of the NFC Championship Game. The Green Bay defense did everything they could to will the team to victory, but instead Rodgers and the offense couldn't manage to do a single thing. Tonight after the first drive Rodgers had every chance he could get to put points on the board and couldn't solve San Fran's defense. Special teams didn't do their part, but Rodgers was far from his MVP self once again in the playoffs. When the defense gets a massive, momentum swinging stop on 4th down with six minutes to go, you can't go three and out and give the Niners the ball right back. When you get the ball back after the game-tying blocked punt, you have to do SOMETHING. I'm not sure it was possible for the Niners to play as bad as they did in the 1st half and only be down 7 points to the 1 seed in the NFC. The Packers offense was stuck in the snow Saturday night and it's a big reason why they won't be playing next week.

So where's that leave him and the organization? Personally, I think he's gone. If you listened to his post game presser it's clear if the team next season isn't close to this roster then he wants no part of it.  I'm sure my opinion will change everyday until he makes a decision, but with the cap hell they're facing I don't see Rodgers wanting to come back to a way different version of this group —a worse version if you will. Maybe they find a way to make it work, hell the Rams have somehow found a way to pay virtually everyone on their team for years so why can't the Packers? It's tough to see 12 in another uniform, but it wouldn't shock me. Also wouldn't stun me in anyway if the guy just gives it up altogether and retires.

Until then, I'm real sad once again because of sports. Pain. Misery. Sadness. The holy trinity of sports depression has arrived with open arms. I hate the San Francisco 49ers.

P.S. The Packers losing tonight wasn't close to as shocking as the moment Jerry chucked his phone 100 yards over the TVs and smashed a light into bolivian. Unbelievable moment that momentarily distracted me from wanting to end my life.