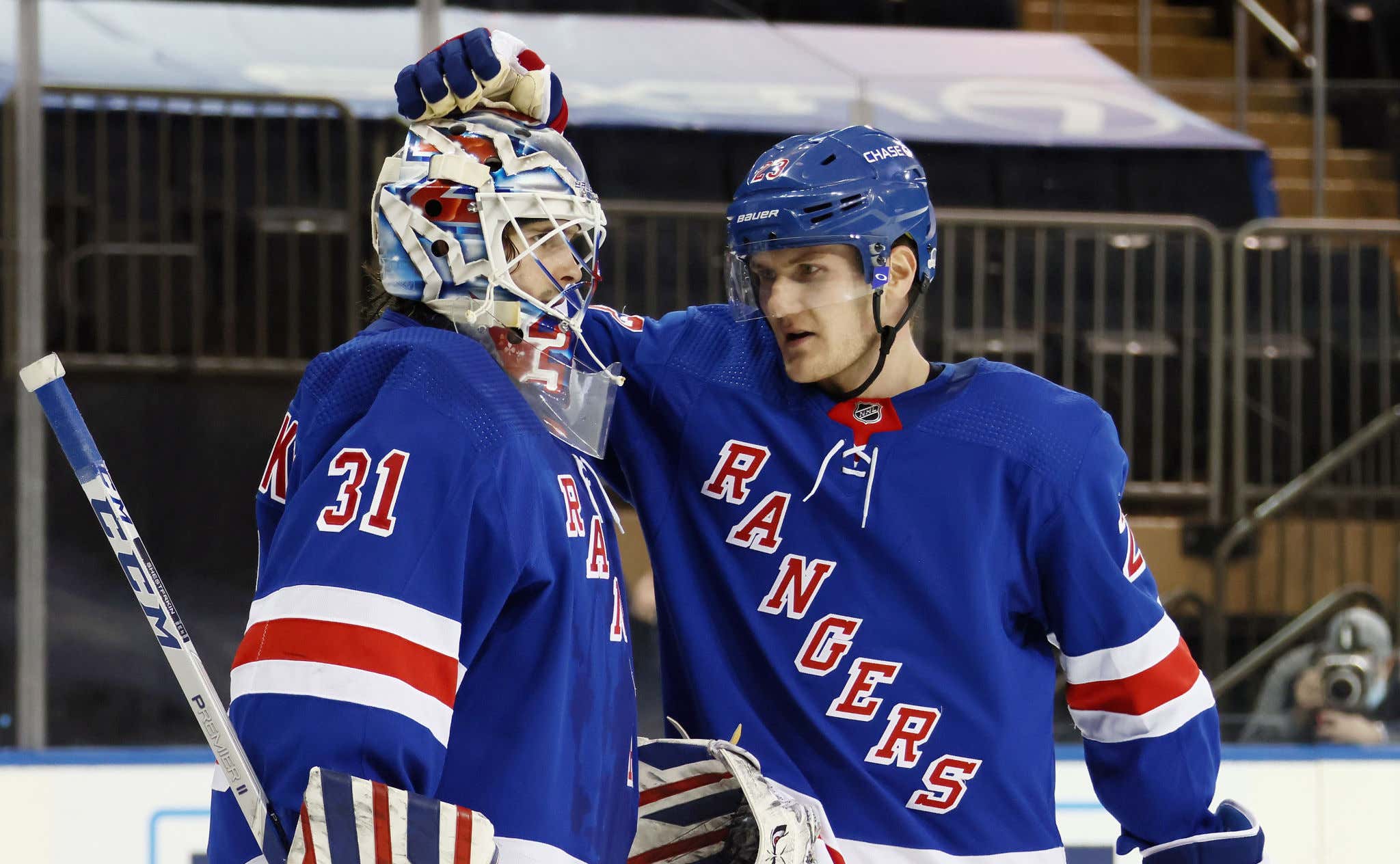 We're less than a month away from the start of the most anticipated NY Rangers season in over 5 years. Their superstars are in their primes. Their future has become their present. Their owner put heavy expectations on the franchise as a whole after dismissing the front office to promote Chris Drury - who in turn traded David Quinn for Gerard Gallant while bringing in several new faces to change his team's culture and identity. Will Drury's moves give the Blueshirts that perfect blend of talent & grit to open their new contention window? Or will they prove to take a promising young squad in the wrong direction?

Only time will tell. Let's get a look at what this year's roster should shape up as, starting with a back end that's all of a sudden looking like one of the more stable, reliable groups across the league…and the most important piece of any back end is the man between the pipes.

It's no surprise the Rangers committed to Igor Shesterkin as their anchor for the next four seasons. He's the unquestioned heir to Hank's throne and there's no denying his talent. Albeit a mere 43 career starts, Shesty has delivered as-advertised and it's no stretch to expect his name as a Vezina finalist before it's time to negotiate his next deal. Some numbers from this past season to support that notion (among goalies with at least 1000 even-strength minutes - thanks Natural Stat Trick):

Assuming the play in front of him continues to improve as expected & lessens his degree of difficulty, Shesterkin's arrow is pointing up even if his play stays the same. If he's got another level to combine with that then the Blueshirts are in for big things real soon. The only obstacle that can derail his success is injury - something that's already reared its ugly head a few times. Health permitting though, the Rangers' crease will be "set it and forget it" most nights as Igor tosses his mask in the elite goaltending ring.

Backing him up once again will be Alexandar Georgiev as he heads to another RFA offseason next summer. Georgie's shown a lot of promise with the Rangers as evidenced in a very solid .913 save percentage through his first 77 games backstopping some pretty bad teams. Last season though was a disappointment despite finally having a competent defense in front of him. Regardless of his bouncing back or not, it's likely his swan song playing home games at MSG - too many raises due for NY to continue carrying a $2.5M+ backup. Still, proving his prior campaign was an outlier will not only solidify a crucial depth position but drive up that summertime trade value as well. I've got faith in goaltending guru Benoit Allaire getting Georgiev right again.

The Achilles' heel of recent Rangers squads has been their defense, no question about it. While it's true defense involves all five skaters their struggles were in large part due to a lack of legitimate talent on the blueline. That's changed drastically and the results were evident across the board last season. Their 5x5 D still has plenty of room for improvement but, even with a corps rounded out by bottom of the barrel names like Smith, Hajek & Johnson, they made their own zone much less of the free-for-all shooting gallery fans were accustomed to watching while also jumping from a bottom-10 to top-10 PK unit. A couple of new faces expected to make up the Blueshirts third pair should keep this team on that same improving trajectory.

There won't be any surprises in their top four, but all signs point to one of the league's elite prospects Nils Lundkvist patrolling the right side of the bottom pair and he's easily the player I'm most excited to see this season. The final bastion of hope in making the McDonagh/Miller trade anything but a dismal failure stuck around in Sweden last year and flat out dominated the SHL. As a 20 year-old, Nils set an all-time record for goals by a defenseman his age (after doing the same thing a season earlier at 19) & finished 6th in points on his way to being dubbed the league's best defenseman - fitting for a player some see as an Adam Fox type.

Now it's unfair to project Lundkvist as having anywhere near the hockey IQ packed into the biggest brain in all of hockey, but his offensive skillset and confidence is right there with Foxy. Wouldn't be the least bit surprising to see the kid make an impact quarterbacking PP2. If any of the two-way praise he's gotten translates to the big stage then NY will have themselves, at worst, their next Tony DeAngelo. TDA minus the circus, plus some semblance of defensive acumen of course. That's a pretty damn good floor.

The Rangers rookie phenom will be helped along by another new addition, fellow Swede & NHL veteran Patrik Nemeth. Playing 'chaperone' isn't the only reason he inked a 3-year/$2.5M per deal here though. Nemeth is essentially a bigger Ryan Lindgren. While he won't contribute much offensively, he's responsible with the puck compared to a guy like Marc Staal who compounds his offensive inabilities with giveaway after giveaway. He'll block plenty of shots, throw his share of hits & use his size to protect the slot where tougher opponents have usually had their way. Every D group needs that unsung hero where you'll go several games without hardly hearing his name because he simply does his job. Nemeth could be that guy in NY.

While the bottom pair brings hope & upside, the top pair brings the epitome of high-end consistency thanks in large part to Adam Fox. I wrote plenty about him when he was named a Norris finalist so I'm going to spare the regurgitation here - feel free to check it out if you'd like. There's not much else to say though about a Norris winner who did so in his sophomore season on a non-playoff team. He's already among the league's elite and will be paid like it shortly.

Fox's partner Ryan Lindgren is the other side of a young duo that's been developing chemistry ever since their teenage days in the US development program, and while it's clear the Long Island native does the heavy lifting that doesn't mean Lindgren is simply along for the ride. He earned his 3-year/$3M per deal in his own right as I discussed here. Together they formed a top-five defensive pairing leaguewide a season ago and, with both just 23 years old, there's zero reason to believe the Rangers dynamic duo won't continue to do so.

If I have any trepidation towards a back end tandem it'd be the middle pair of Jacob Trouba & K'Andre Miller - and a lot of my concern hangs on Miller. The kid had a successful overall debut, thrown right into the fire out of Wisconsin to the tune of 21 NHL minutes a night. I just distinctly remember watching the last few weeks of the season and Miller regressing. Looked much more the part of a discombobulated rookie as opposed to the surprisingly composed player he was through March or so. He's just not very good with the puck - I hated him on the second power play unit & he turned the puck over a ton in general. He's able to make up for it with his athleticism & reach (among the league's best in takeaways) but it's a very volatile way to play D.

Key managed to punch in 5 goals in 53 games which is solid, but the reality is he got a little lucky. Scored more than he should have & finished with a shooting percentage among the elite when his toolbox is simply not that of an elite scorer. I have no doubt Miller will find his niche in the long run. I love his potential and when he starts using his size to initiate contact & bully opponents when he needs to, watch out. Let's not forget though that this is a kid who jumped from college to the NHL which is a tough leap for defenders - especially ones who just started learning the position in high school. A sophomore slump wouldn't shock me in the least.

As for the tandem together, they seemed to do a good job on the surface. Among the 33 pairings who skated at least 500 5x5 minutes Troubs & Key were 10th in goals against per-60 (1.8). For context, Fox/Lindgren were 3rd at 1.54 - not bad for the Rangers middle pair. Looking deeper into the numbers though, they actually had a lot of good fortune. They ranked 28th of 33 in both high-danger chances and expected goals against per-60 but were bailed out often by the 6th-best on-ice save percentage. Now, having a netminder the caliber of Shesterkin will usually make team defense look better than it is - but the difference in this case is drastic enough to worry whether the scales will continue to tip as favorably if Miller and Trouba don't take steps forward this season.

Libor Hajek and Anthony Bitetto are still around for cheap depth while Drury also added 6'6 Jared Tinordi to slot into the lineup whenever someone needs to get punched in the face. Names like Zac Jones, Matthew Robertson & Braden Schneider are all promising prospects who will most likely continue waiting for their opportunity (or to get dealt for a center) while piling up quality minutes in Hartford. Barring injury or something absolutely shocking, Gallant & new defensive coach Gord Murphy (promoted from the Wolf Pack) already know exactly who they'll be leaning on throughout the 2021-22 season. The majority of Rangers postseason hope lies in whether or not their most balanced, talented defensive group in recent memory can play to expectations. If they can improve at a similar rate to how they did from 19-20 & 20-21 then playoffs at MSG are a lock. You heard it here first.