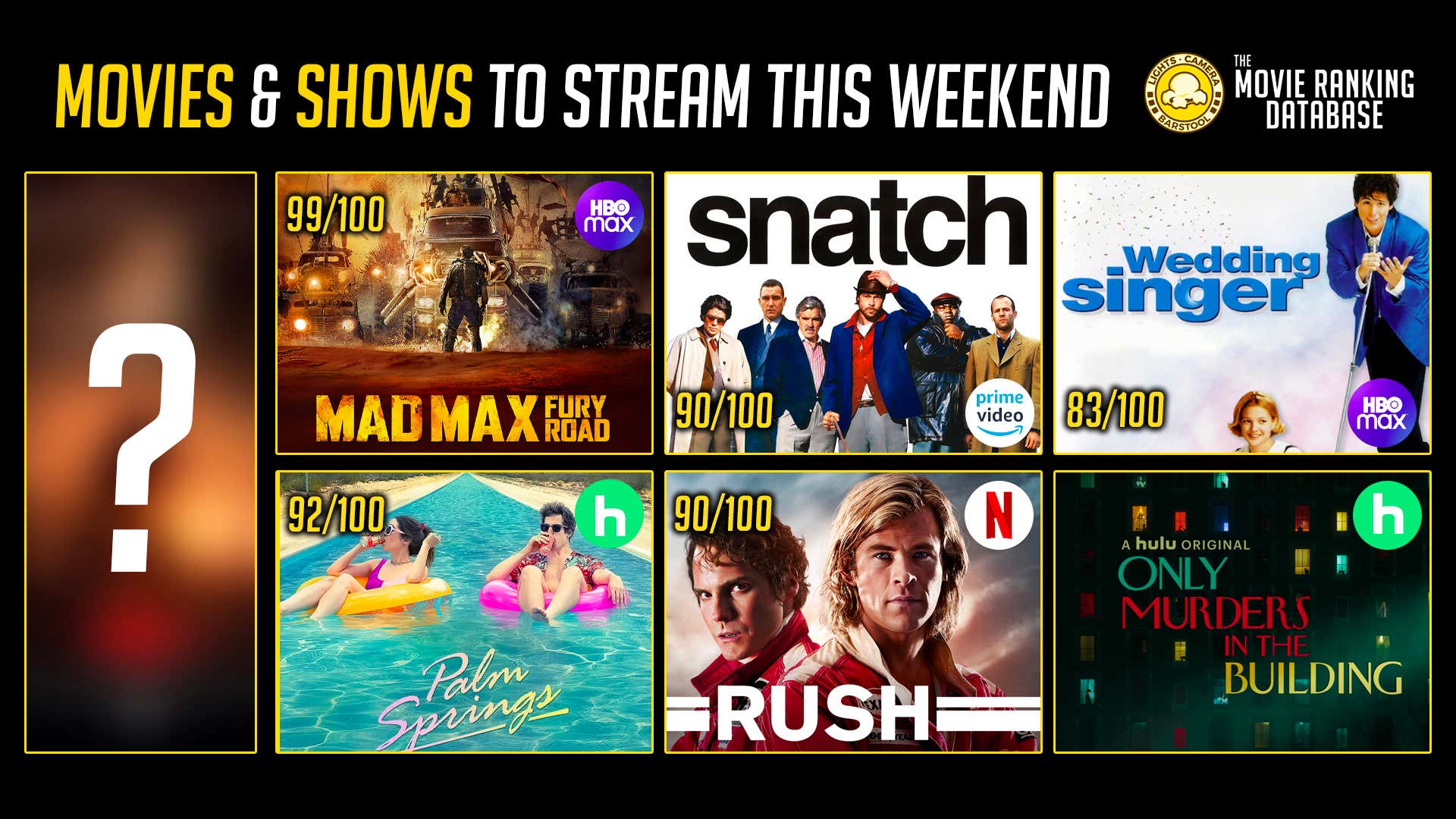 1. Rush (NETFLIX): This is one of the greatest racing movies ever made. Great drama, solid acting from Chris Hemsworth and Daniel Bruhl, and some of the better actual racing sequences you'll ever see.

2. Total Recall (NETFLIX): This might be a bit of a guilty pleasure for me, but I earnestly think it is both really entertaining and very funny at points. It is VERY Verhoeveny and has some great over-the-top acting from Arnie and Sharon Stone. Also, I just love Michael Ironside. Sam Fisher for life, baby.

3. Mad Max Fury Road (HBO MAX): I blogged yesterday about how the cars from this movie are up for auction, which reminded me about how great his movie really was.

4. The Wedding Singer (HBO MAX): God I love this movie. It is my 3rd highest ranked in Sandler's catelogue only behind Uncut Gems and Big Daddy. Cue the Uncut Gem haters complaining in 3…2…1….

5. Dog Day Afternoon (HBO MAX): This is a fantastic movie that doesn't get the same love other early Pacino works get for some reason. Also, lets talk for a second about John Cazale. He was in 5 movies before passing away at age 42 after a battle with lung cancer. Those 5 movies? The Godfather I & II, The Conversation, Dog Day Afternoon and The Deer Hunter. Those 5 have a combined 40 Oscar nominations and 15 wins. An average of 96% on rotten tomatoes! The guy did not miss and was truly special. He was also dating Meryl Streep when he passed. Pacino said "I've hardly ever seen a person so devoted to someone who is falling away like John was. To see her in that act of love for this man was overwhelming".

6. The Thin Red Line (HULU): This is for sure a slow burn that will probably turn off most lovers of conventional WW2 movies. Although, I assume most WW2 movie fans have already seen this and have their own feelings on it.

7. Palm Springs (HULU): This is without a doubt one of the best movies of last year. Funny, sweet and full of heart. What more do you want?

8. Snatch (PRIME VIDEO): Crime comedy and Guy Ritchie go together like peanut butter and jelly. Such an effortlessly smooth movie that only gets better every watch.

9: Apocalypto (PRIME VIDEO): This is a sneaky awesome movie. The grittiness, tempo and action. Man, I'm going to rewatch it right now.

10. Ant-Man (DISNEY+): The funniest Marvel movie doesn't get the respect it deserves due to the huge personalities of its counterparts. Easily one of the most re-watchable among the MCU

1. The Witcher (Netflix): Even as a fan of the video game, this was a little heard to follow at first. It was written based on the books, which follow a bit of a disjointed narrative. Once you get it, though, it really clicks.

2. Only Murders In This Building (Hulu): I had high expectations for this show, and it has so far delivered in a big way. Martin and Short have the chemistry we expected, and Selena Gomez fits in perfectly to the equation. If you like murder-mystery, this is for you.

3. What If…? (Disney+): I stand by my opinion that the animation style is a little whack. But the stories have only gotten better as the series has gone on.