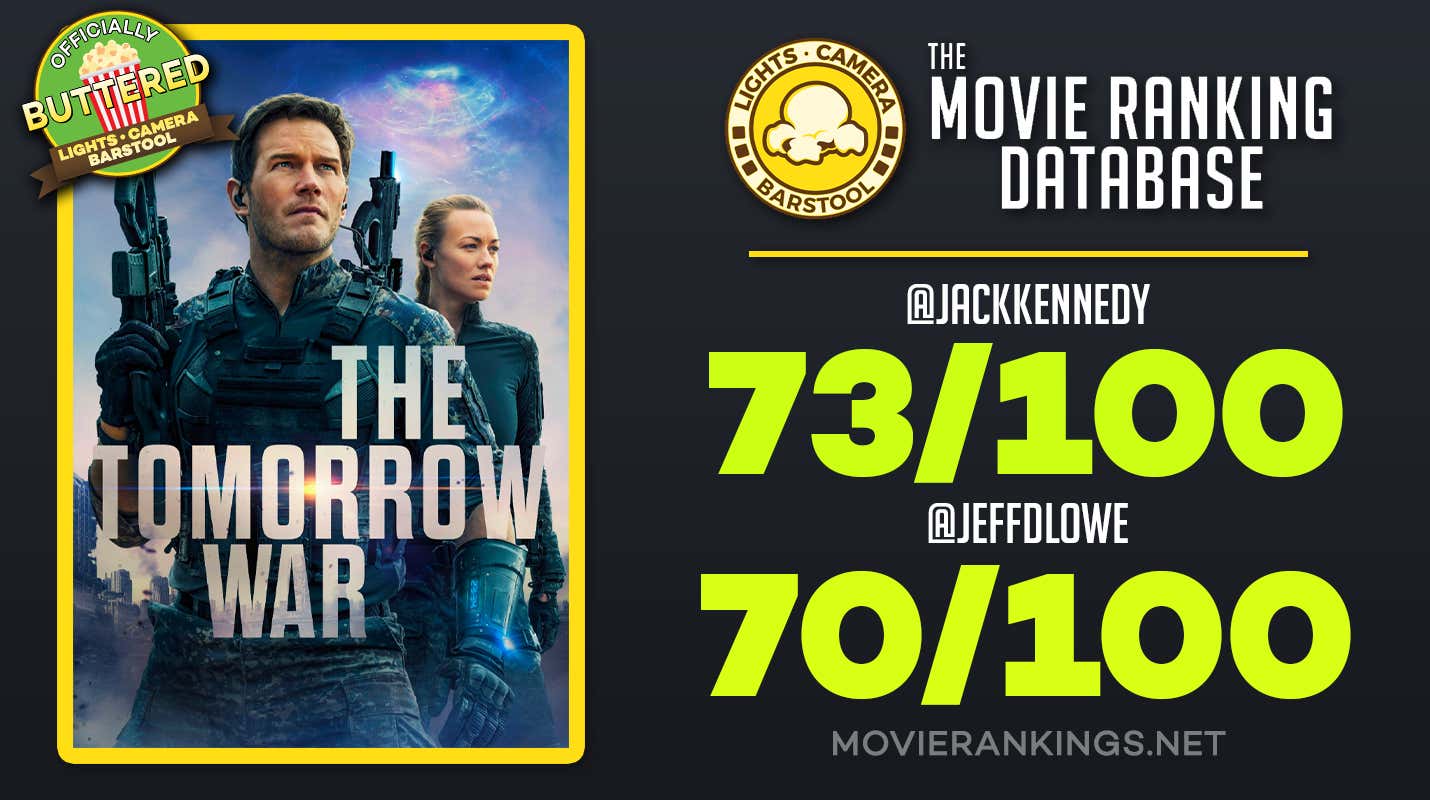 A man is drafted to fight in a future war where the fate of humanity relies on his ability to confront his past.

On the last few episodes of the pod, I was VERY down on 'The Tomorrow War'. Everything about it seemed destined for failure. Well, not like FAILURE failure. More like a crappy bore with a score ceiling of 45/100. The way it was being pseudo-marketed, Chris Pratt being the only BIG star, the trailers. It was all systems fail! I went so far as to say I would eat my hat if this was entertaining. Well, call me Frank the Tank, cause I am guzzling down on my hat like Joey Chestnut.

The movie is a mesh of 2 major aspects. The time-traveling, military sci-fi tomorrow war, and the personal life and story of Chris Pratt's character, Dan Forester. The time travel part of this movie rocks. It's chock full of holes, continuity problems and more, all of which are easily patched up by the scientists who made the time travel machine telling the audience how the machine sucks and they can't get it to work right. The future world they made is cool as hell, and I love the amount of budget they put into military costume and props because almost NOTHING helps immerse an audience into a fictional world more than that. In addition to that, they did a ton of practical effects vs green screen which will ALWAYS be a major plus.

Something this movie also did extremely well, which was make-or-break IMO, is that they had fantastic aliens. The design was horrifying, the way they moved and the sounds they made all added to that suspenseful, hopeless and overwhelming feeling humanity felt. The only misstep was the name "White Spikes", which is inherently kind of dumb but also worse when the actual spikes the aliens use were almost an afterthought in the way they fought people.

The other major aspect, the personal story that I mentioned earlier, was probably where this movie was the weakest. I think they could have done a better job working on the relationship between Forester and his daughter, espeically since the emotional climax had to hit HARD at around the halfway point of the movie. Part of that might be because of the way Forester is presented? The first 5 minutes show him to be basically the perfect guy. He's a former vet that is now a biology teacher, a perfect dad and funny dude. We, as an audience are supposed to buy in that his entire life falls apart and he turns full heel after losing out on a single job, which is the impetus for him and his daughters whole conflict. Just didn't work for me.

There isn't a TON to talk about on the acting side. Chris Pratt was Chris Pratt. Charming and lovable with great sense for comedic moments and tenuous at best in the dramatic. The big star, in my opinion, was Yvonne Strahovski. She carried the load dramticly speaking and did a phenomenal job at it. Sam Richardson also elevated the hell out of this movie's comedic relief, and they didn't over rely on him which was refreshing.

Like I said earlier, it's a dumb movie. The time travel mechanism is full of holes, the lines are dumb, and with the fate of humanity on the line, Chris Pratt goes to one of his former students to tell him how volcanos work. It's an amalgam of other properties in that is vibe jacks Edge of Tomorrow/Battle Los Angeles, has some plot rips of Interstellar AND Gears of War, and it feels like it is a Transformers movie despite not being one. Is that plot pacing? I don't know. The point is, this movie is entertaining as hell and I think that is exactly what they had in mind. Scary, suspenseful, great effects and action, and sneaky great comedy. They felt self aware of their crappy one lines (Especially with the J.K. Simmons character) which was very suprising.

I definitly recommend it, but with the caveat that you should not go into it expecting it to be a big thinking movie. Full pod review HERE: