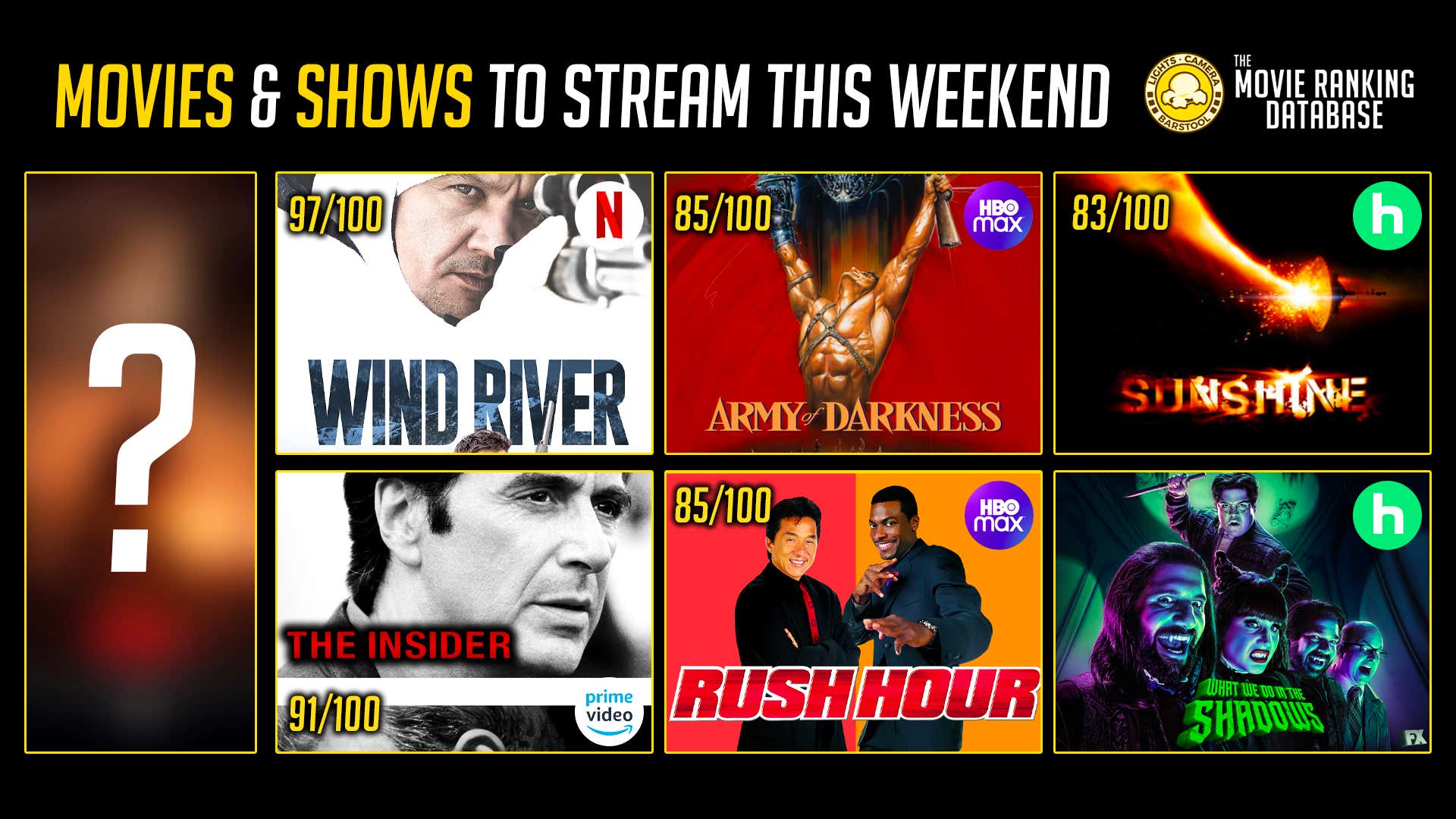 1. Wind River (NETFLIX): This movie is part of the Frontier Trilogy along with 'Sicario' and 'Hell or High Water', but doesn't et enough love. It is a REALLY good movie, and I think the lack of exposure is due to it being a Weinstein joint and releasing right around when that scandal erupted. The 'Why are you flanking me' scene is one of the most tense moments in a movie that I can remember.

2. School of Rock (NETFLIX): I talked about this a bunch in my blog on movies coming to streaming this month, and there isn't much more to say. It's School of Rock! I shouldn't have to pitch you.

3. Rush Hour (HBO MAX): I'm not a big fan of Rush Hour 3, but Rush Hour 1 and 2 are so much fun. I recently rewatched both and had such a good time watching funny, dumb dialogue and crazy martial arts moves.

4. Point Break (HBO MAX): One of the all time dudes rock movies that is always worth a watch from a man who appreciates his bros. Or action. Or crime. Or adrenaline.

7. Sunshine (HULU): I was tweeting a little bit about this movie the other day because I truly think it is one of the better space movies made in the last few decades. Sneaky stacked cast(Cillian Murphy, Chris Evans, Rose Byrne,  Michelle Yeoh, Mark Strong, Benedict Wong, Cliff Curtis, Hiroyuki Sanada), PHENOMENAL score from John Murphy and really good special effects.

8. The Insider (PRIME VIDEO): A Michael Mann BANGER that is sneaky one of the better roles from Russel Crowe.

9: Highlander (PRIME VIDEO): It is crazy how good this movie is despite Christopher Lambert being a TERRIBLE actor. A lot of that has to do with the Egyptian Spaniard with a scottish accent (Sean Connery) and Clancy Brown being so good in the role of the Kurgan. Plus, the Queen soundtrack is out of this world.

10. Turner and Hooch (DISNEY+): I refuse to watch the Josh Peck show on principal because I love the movie so much.

1. Reservation Dogs (HULU): This is a new Taika Waititi show airing on FX and streaming on Hulu. I've been really digging it, and I think you guys will too.

2. What We Do in The Shadows (Hulu): Another Taika Waititi joint, I have loved both seasons of this show and season 3 just got off to a solid start.

3. Wellington Paranormal(HBO Max): ONE MORE TAIKA JOINT! I recently started this because it started streaming on HBO and I can't get enough. It's part of the 'What we do in the Shadows' universe and it has that same level of quiet, hilarious lines with expert delivery.