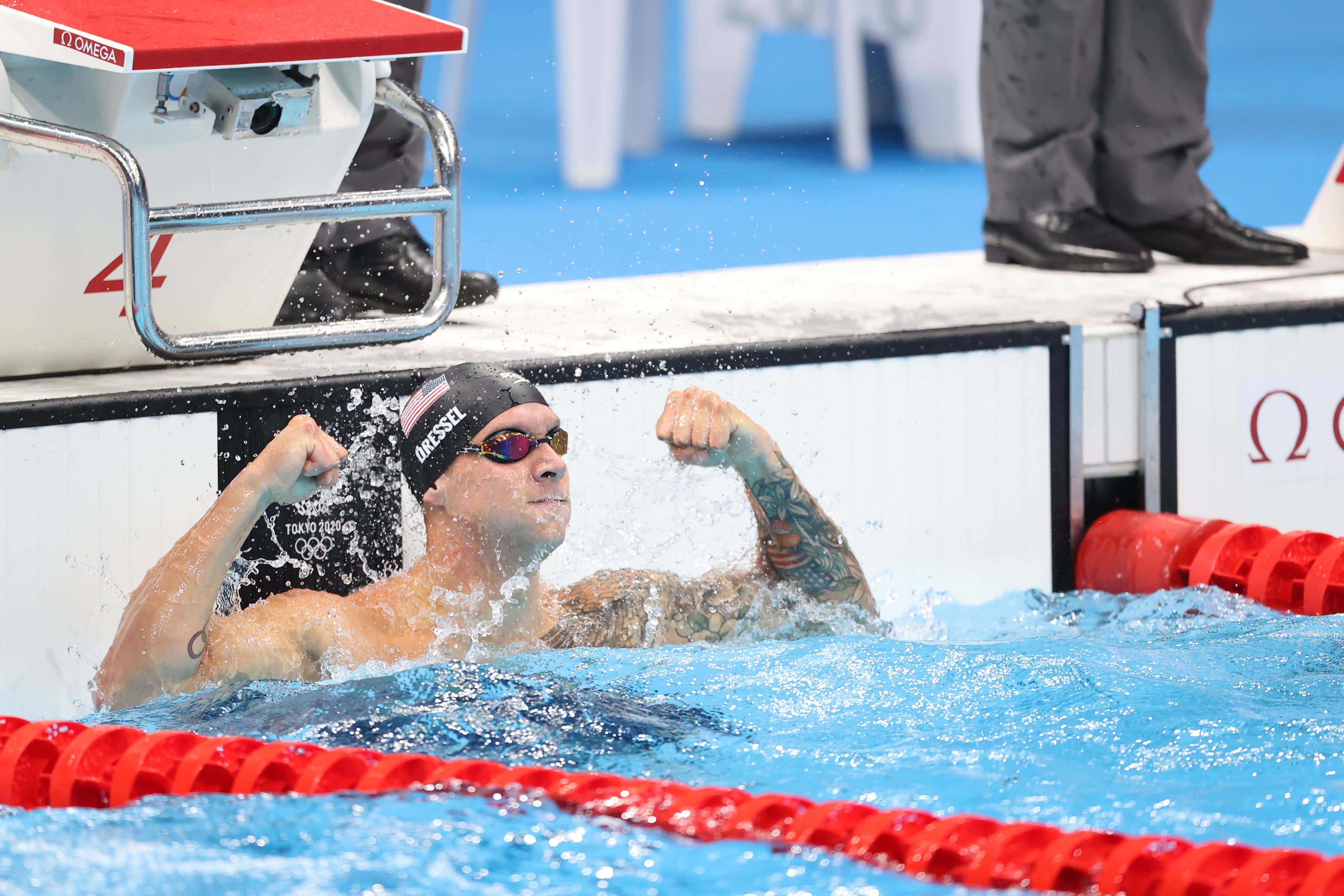 Caeleb Dressel has won 5 gold medals, he has proven to dominate almost every event he swims in, and is just an all-out beast.

I have blogged previously about Dressel and predicted he would dominate the water in Tokyo like Godzilla. Dressel is almost like an American superhero, his giant Bald Eagle U.S.A flag tattoo is sick and he reminds me of a G.I Joe more than an average person. He also loves animals and has a ton of animal tattoos.

What Dressel has accomplished is historic and he is a source of pride for many Americans as we compete on the world stage during a pandemic that has been difficult for all.

Here is a recap of all his individual and team Gold medal races.

Surprisingly Dressel didn't even swim the fastest out of all of his teammates. Impressive team win but nowhere close to as impressive as some of these other races.

Dressel beat the Australian Chalmers by .06 seconds. The Australians have been the biggest competition in this Olympics and Caeleb Dressel is the only man who has been saving the world from more crazed Aussies celebrating.

Do you see this psycho? Caeleb Dressel wins in the pool to save us from these wallabies.

A touching moment after the race is when Caeleb Dressel sees his family for the first time since departing for the Olympics.

I'm not crying your crying.

NBC really got everyone's emotions flowing with how much they have been showing fan and family reactions and just pulling on all our heartstrings.

Caeleb then won gold in 100m Butterfly and broke his own world record he had made in the qualifying rounds of the race. The butterfly is the most alpha stroke in my opinion. You launch your body out of the water like a goddamn dolphin and battle your way through the pool. Here is his semifinal world record.

This is the fastest race in swimming. He just dominated 50m freestyle in a crazy fashion he can probably swim 50m faster than some people can even run 50m. The craziest part of the race is that he didn't take a single breath. He held his breath for all 50m.

Now to put that in perspective, Navy Seals have to swim 50 yards underwater just to qualify to be part of the greatest fighting force in the world. Caeleb Dressel did just that (actually farther yards vs meters) while his body was operating on the highest level cutting through the water while deprived of oxygen. So many guys pass out and drown trying to complete the Navy Seal test and those are in shape individuals who had been practicing. Caeleb Dressel traveled the fastest a man has ever through water ever in one breath. (freestyle is the fastest stroke)

Lastly, Dressel was the butterfly leg of the medley relay. The last gold of another amazing showing by an American at the Olympics.

It shouldn't be surprising how athletic he truly is. Check out this video of him jumping.

Caeleb Dressel if you ever find yourself in NYC I would love to grab a beer with you and also come on Pardon My Take.

He joins the ranks of other amazing Olympians to have won 5 golds in a single Olympic game.