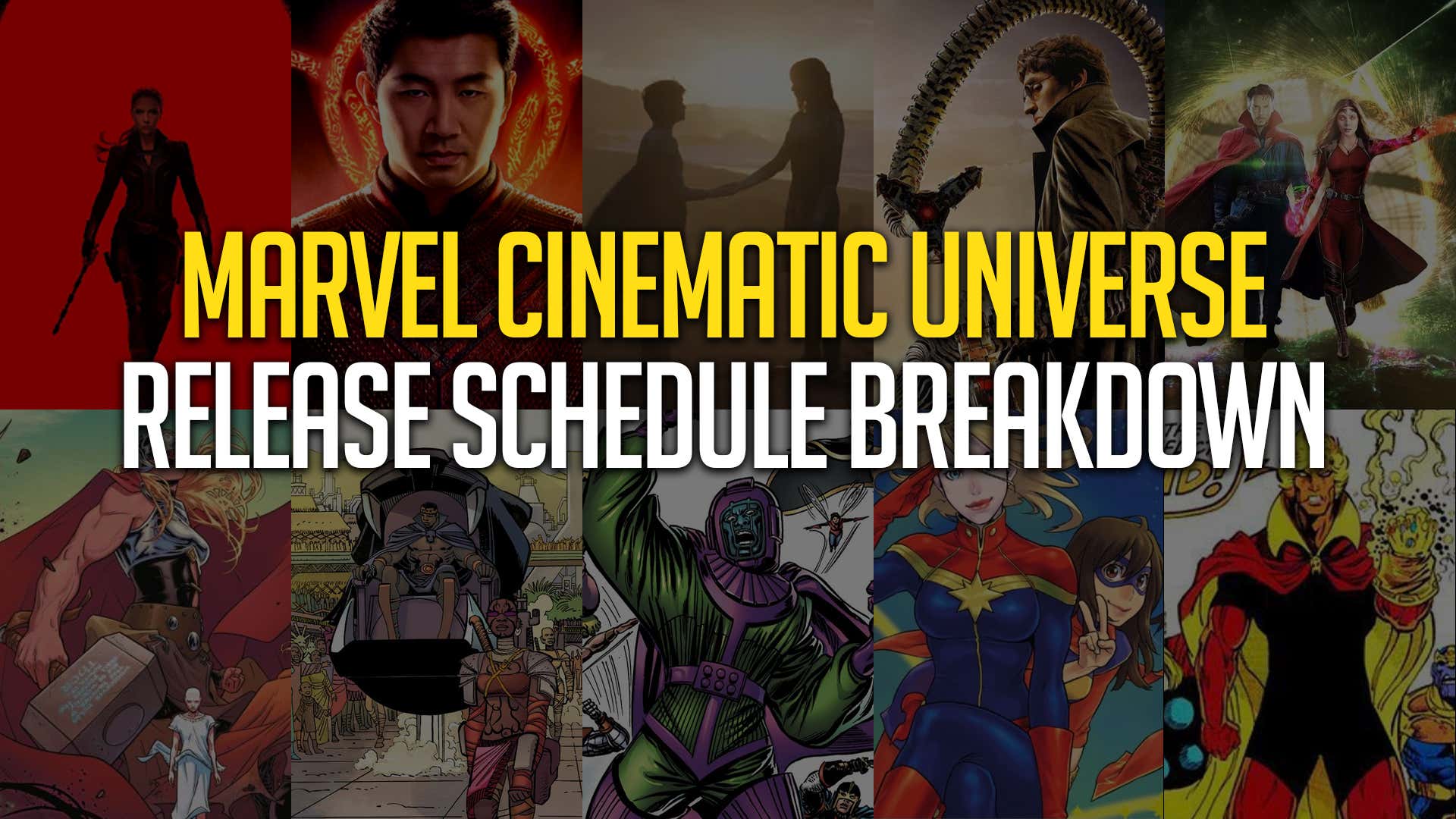 Marvel has been giving us a relatively consistent stream of content in 2021 after the full year gap we had in 2020, but seeing the new, (hopefully) ironclad schedule of movies for Phase 4 just hits different. Lets go down the line and break down what we're getting over the next few years chronologically.

At birth the Black Widow "aka Natasha Romanova" is given to the KGB, which grooms her to become its ultimate operative. When the U.S.S.R. breaks up, the government tries to kill her as the action moves to present-day New York, where she is a freelance operative.

I'm sort of a broken record when it comes to Black Widow, but I'll reiterate my basic thoughts. The MCU is sneaky great at espionage storylines, especially when you consider how great Captain America: The Winter Soldier was. If this movie follows that same formula while giving us some background on Black Widow as a nice farewell to the character, thats a huge win IMO.

Shang-Chi must confront the past he thought he left behind when he is drawn into the web of the mysterious Ten Rings organization.

After an unexpected tragedy following the events of Avengers: Endgame the Eternals—an immortal alien race created by the Celestials who have secretly lived on Earth for over 7,000 years—reunite to protect humanity from their evil counterparts, the Deviants.

I think the Eternals is going to be unlike anything we have ever seen from Marvel before. The Director, Chloe Zhao, just cleaned UP at the Oscars for her movie Nomadland, and this was an interesting project for her to take. Both of her previous movies have been very intimate, grounded human stories that were told incredibly well. This movie, however, has a monster ensemble cast and they're playing immortals with unimaginably large scale powers on sets that will require a lot more CGI touch than she is used to. I think she was up for the challenge and that we're gonna get our fucking DOORS blown off.

An unspoken fact about this movie is that it is going to dip into the multiverse and include more than just the crossovers of Alfred Molina (Doc Ock) and Jamie Foxx (Electro). It's rumored we get more previous cast-members including Andrew Garfield, Willem DaFoe and more. I still am on the fence about Tobey, though. He really doesn't give a fuck, but money might be able to sway anyone to do anything. Not that he cares, but imagine that moment on-screen when we see all three spider-men on screen at once?

March 25h 2022: Doctor Strange In The Multiverse of Madness

After the events of Avengers: Endgame (2019) and WandaVision (2021), Dr. Stephen Strange's continuing research on the Time Stone is hindered by a friend-turned-enemy, resulting in Strange unleashing unspeakable evil.

An interesting note on this is that Scott Derrickson, who directed the original movie, left due to creative differences last year. He is a horror movie director usually, and he butted heads with Marvel over the direction of this one. Now, replacing anyone for a horror-based movie with Sam Raimi isn't exactly what I would call a downgrade, but I never like hearing red-tape stories like that. I do think that, regardless of where it goes, this will definitely be different since Marvel hasn't really dipped their toe in the genre of horror before.

Note* The word is that this is based off of the MIGHTY THOR comic book run. In that storyline, Jane Foster (Natalie Portman) husband dies and she is diagnosed with breast cancer. She picks up Mjolnir, becomes Mighty Thor, and is healed when she transforms into the hero (temporarily, anyway).

I'm not sure if any character did as much of a 180 as Thor did after Love and Thunder, The first two movies were too serious and pontificating, and Ragnarok went completely away from that giving us a hilarious, colorful story with a ton of heart. That change is due to Waititi being an incredible director (and also actor, since Korg is hysterical). Him having the reigns on both his characters and the GotG characters, which are in the same vein, is great news for us. This is going to be an insane movie that is only made fucking crazier by the fact that CHRISTIAN BALE is in it! His character, GORR THE GOD BUTCHER, is basically a serial killer of gods, so that should be fun.

The film will honour Chadwick Boseman and his portrayal as king T'Challa as well as explore the world of Wakanda.

The character of Black Panther obviously means a lot to the black community, as evident by it being the second highest grossing superhero movie all time only behind Endgame. With that in mind, I think that one thing Boseman wouldn't want is for that storyline to just end or fade away, so I like the fact that they are pivoting this to be a story about Wakanda and maybe set up a new character to take up the spotlight is a great idea IMO. I am curious to see an actual synopsis or just tease of what the movie is going to really be about, though.

This movie is going to have a lot of connective tissue to the upcoming Ms. Marvel series, which is releasing this fall. Here is a quick synopsis of that series which is coming this fall:

"A great student, avid gamer, and voracious fan-fic scribe, Kamala Khan has a special affinity for Super Heroes, particularly Captain Marvel. However, Kamala struggles to fit in at home and at school — that is, until she gets super powers like the heroes she’s always looked up to. Life is easier with super powers, right?"

If the series shakes out well, then this could make for a great superhero-sidekick duo. I liked the original, but not as much as I wanted to, especially considering how powerful the character of Captain Marvel is and the universe she was helping set up. But there is always hope that with a new cast, new director and new story that we can get something awesome. Oh, and the setup of Monica Rambeau as Spectrum in Wandavision should make for an interesting addition.

Scott Lang is grappling with the consequences of his choices as both a superhero and a father. Approached by Hope van Dyne and Dr. Hank Pym, Lang must once again don the Ant-Man suit and fight alongside the Wasp. The urgent mission soon leads to secret revelations from the past as the dynamic duo finds itself in an epic battle against a powerful new enemy.

Both Ant-Man movies were sneaky very good, and it sucks that he kind of gets forgotten in the grand scheme of things. Paul Rudd is so charismatic and perfect in the lead role, and all of the co-stars and tertiary characters are hilarious as well. The big addition to this movie was Jonathan Majors, who is an awesome dramatic actor, as Kang the Conqueror. He is a time-traveling super-genius bad guy who I'm sure is going to be a very different type of bad guy than we are used to, especially since he isn't superpowered.

NOTE* We're still super far ahead of getting a legit synopsis, but here is what we know rumored from WeGotThisCovered

And according to our intel, there are two main storylines. One is that Rocket will be on the hunt for his creator so that he can kill him, while Adam Warlock will be trying to find the Guardians themselves, and he has similar intentions to Rocket, as he wants to kill them.

Guardians 3 obviously had a little bit of turmoil when James Gunn was fired and re-hired, so the timeline on this is going to be really funky. However, we did know for a fact that Adam Warlock was teased at the end of Guardians 2. In case you aren't familiar with Warlock, here is a quick synopsis of him from the comics:

Adam Warlock was created by a group of Earth scientists called the Enclave as part of their effort to develop an army of perfect, invincible humans. … Upon emerging from a large cocoon, Warlock—then known only as “Him”—possessed vast cosmic powers and immediately rebelled against the scientists, whom he considered evil.

None of the main guardians have powers that can match up with Warlock, so this head-to-head is going to be interesting. I really want to see who they cast as Adam Warlock, who we knowknow for SURE is not going to be Zac Efron.