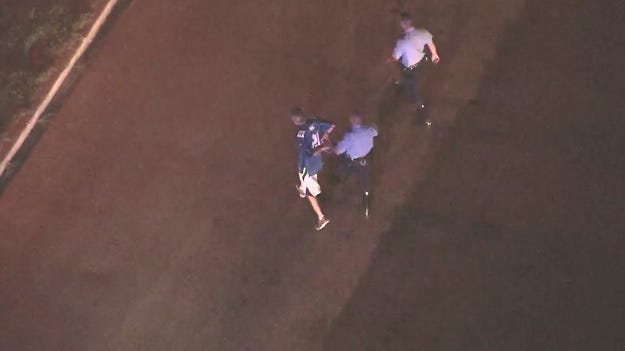 6 ABC – Investigators said on Tuesday that the man who led police officers from multiple agencies on a two hour pursuit that spanned two states was wanted for stealing underwear, among other crimes.

Robert Ritter, of Blackwood, N.J., was captured after the chase on Monday evening. Police say Ritter stole $10.50 worth of underwear from a Shop Rite store in Brooklawn, New Jersey. Police say he has an extensive violent criminal history and faced numerous arrest warrants.

From Last Night: When You’re In The Middle Of A Police Chase But You Still Have To Pay The Tolls

Okay so here’s what I need to know. What kind of a psycho throws on his (possibly customized?) Giants jersey on a Monday night in July and decides to go out to steal $10.50 worth of underwear and then proceed to get into a high-ish speed police chase in the Philadelphia area? It’s just such a bizarre way to spend a summer Monday night. But that’s what our boy Robert Ritter chose to do, and for that, I guess I can only thank him. Because #PhillyChase goes right up there with Cole Hamels’ no-hitter as one of the best moments in Philadelphia this summer so far. It was an electrifying night filled with some of the finest driving I’ve seen since my days of playing GTA. I mean, take a look at the patience and precision on this move right here to avoid the fuzz near the stadiums.

Of course there was also the moment when he went through the tolls last night and 100% got charged through the EZPass. And then the show was eventually brought to an end in thrilling, flipping fashion.

Finally getting taken down over $10.50 worth of undies has to be a tough pill to swallow, but I guess it’s still better than actually having to do laundry. Maybe next time he’ll just sign up with MeUndies and avoid the whole getting chased by police part.

P.S. – If for some reason you’re not following @World_Wide_Wob, you probably should now.