USA Today – A 17-year-old Connecticut teen is inspiring acts of kindness after her death.

On July 2, 2015, Rebecca Townsend attended a fireworks show in Danbury, Conn., with her friend, Ben Arne. As the two were walking back, a vehicle struck them. According to BuzzFeed News, Ben told the family that he remembered Rebecca pushing him out of the way just before the impact. Ben was hospitalized; Rebecca was killed.

The accident is still being investigated, but authorities told NewsTimes the crash involved a 23-year-old Brookfield, Conn. driver.

After Rebecca’s death, the family said they were reminiscing in her bedroom when they discovered a bucket list. The list was assigned to Rebecca — who was slated to attend the University of Notre Dame this fall — during her sophomore year at Immaculate High School in Danbury, Conn. It was returned to her after graduation. 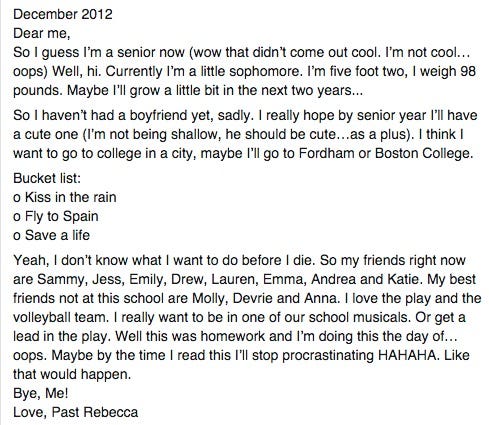 Rebecca’s sister, Victoria Townsend, told BuzzFeed News that they traveled to Spain together as a family and that Rebecca kissed her boyfriend in the rain.

But it was not until they found the note — all laid out for them on her bed — that they realized she had fulfilled her last wish.

“It was a little sign that she was OK,” Victoria told BuzzFeed News.

Not to start off Tuesday morning with the saddest story ever or anything, but sometimes something is just such a good story that it has to be mentioned. 17 year old Rebecca Townshend not only sacrificing her own life to save her friend, but foreshadowing all of it with a school assignment 2 years earlier. Having a bucket list that includes “saving a life” then doing just that. Incredible. Absolutely tragic and heartbreaking for the parents and friends, of course. But with the #RememberingRebecca hashtag going insanely viral right now inspiring random acts of kindness around the country and donations pouring in to charities and nonprofits, it’s got to be a small consolation at least to realize the awesome legacy she left behind.