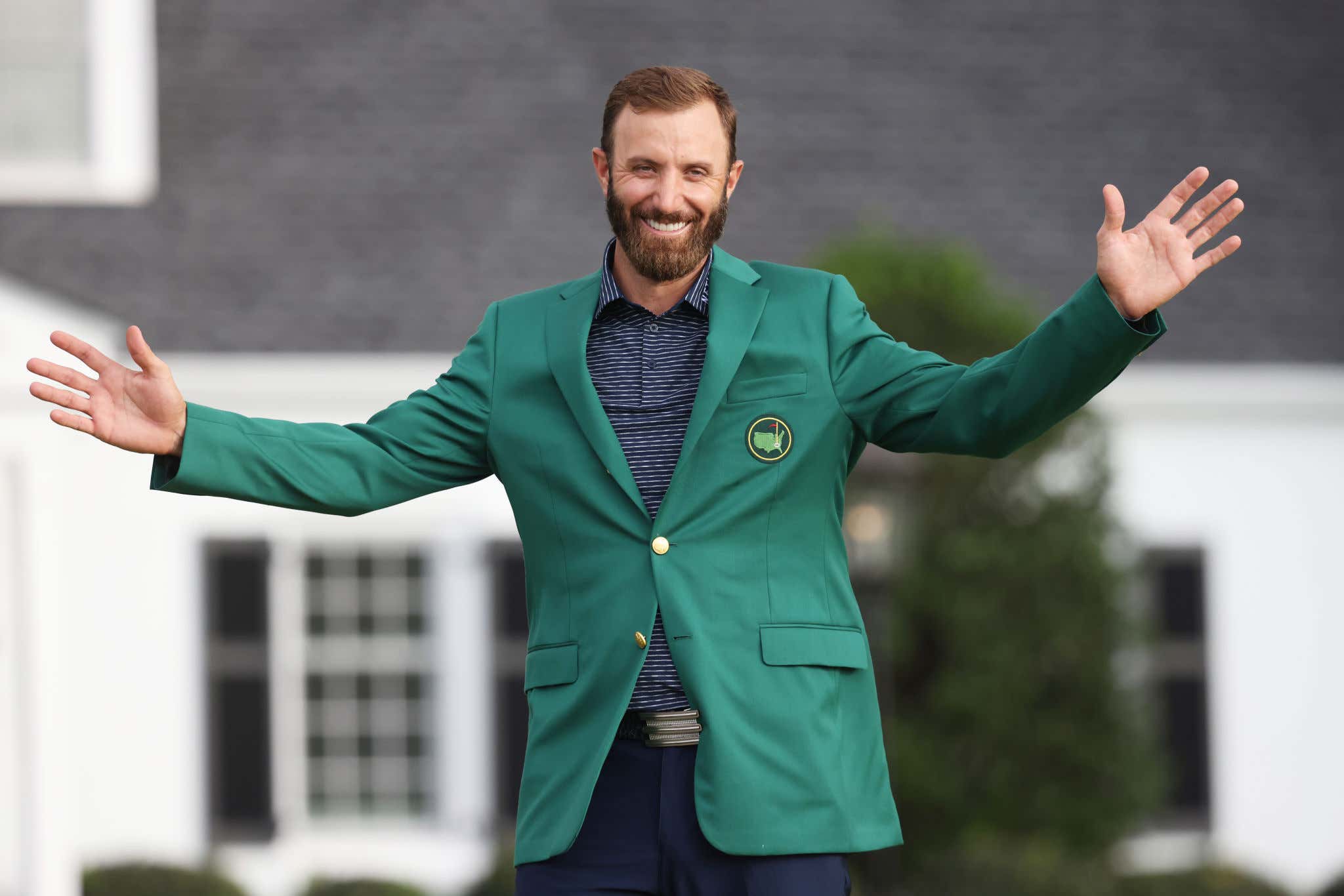 What a year. A strange one obviously, but a year nonetheless. Nearly every major sports league incurred an interruption from COVID and golf was not exempt. 3 of the year's majors were moved from their original scheduled date and we lost the Open Championship. It was a Ryder Cup year as well and that was pushed to 2021.

But the PGA Tour was also the first major American sports league to return from quarantine and led the way in some regards with how to return. There were a few bumps in the road and a few positive tests along the way, but ultimately they got the FedEx Cup Season in and did not sacrifice much of the 2020-21 schedule in the process.

Anyways, I'm here to hand out superlatives, so buckle up.

Golfer Of The Year - Dustin Johnson 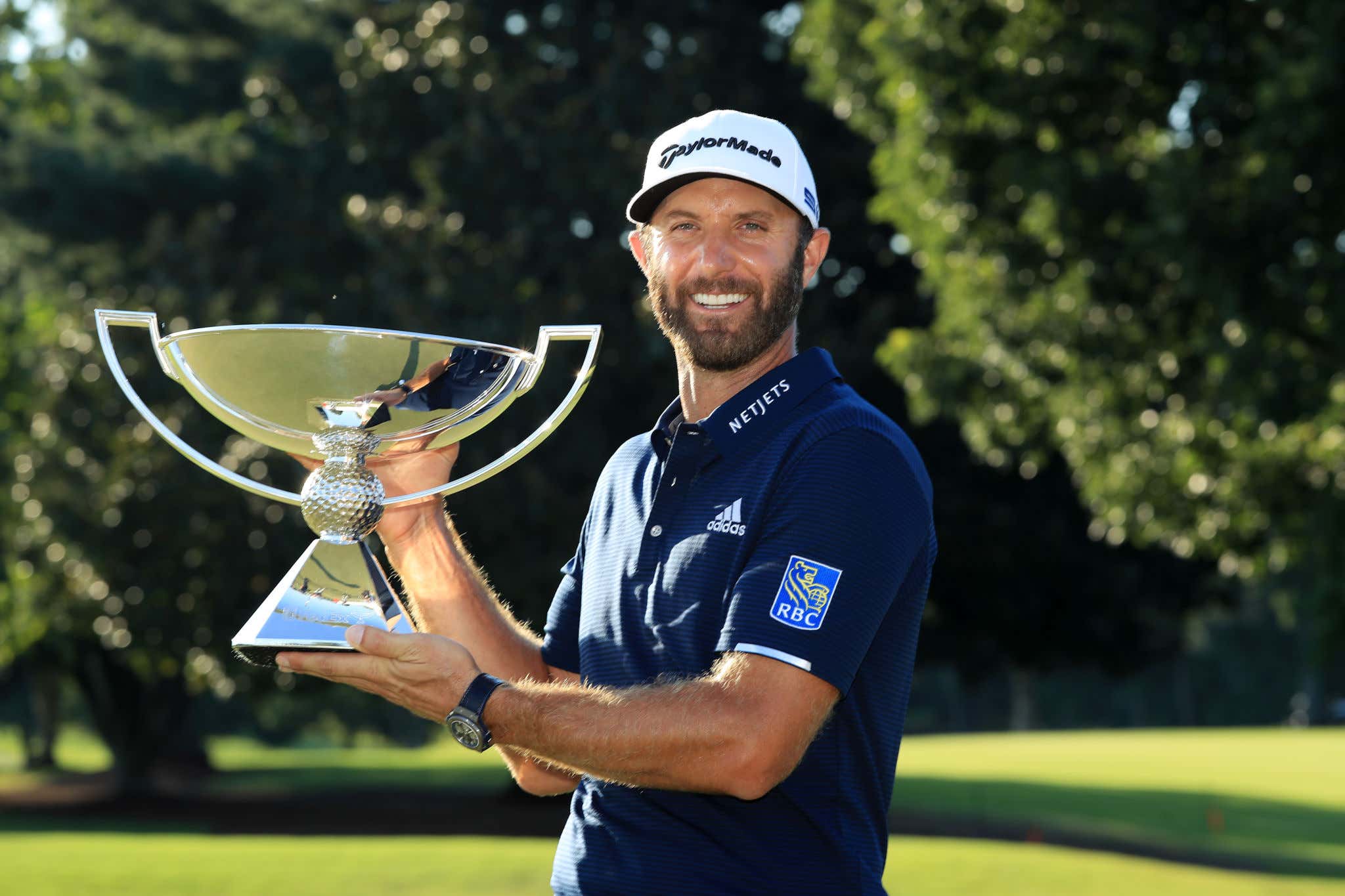 I mean who else could it be? Take away the Masters win and it still might be DJ. The win at Augusta is obviously the highlight of his career thus far and he played dominant golf all week, but it was really a continuation of an incredible fall for DJ. In the calendar year, Dustin compiled 3 wins, 4 runner-ups, and two more top 5's. One of those runner-ups was at the PGA Championship, and he added a T-6 at the US Open. He also won the Tour Championship after setting himself up as the frontrunner with a win in the first playoff event and a loss in a playoff at the BMW Championship (more on that shortly).

People will of course remember his first green jacket most, but it was the way that he won that first playoff event at the Northern Trust that was most impressive in my eyes. We've seen DJ lap fields before, but going 67-60-64-63 to turn in a -30 score was just unfair. Poor Harris English probably had one of the best tournaments of his life going 64-66-66-69 and lost by ELEVEN STROKES. When DJ is on he's untouchable. He was as untouchable as ever this year, scored the biggest win of his career and cashed his biggest check, and that's why he's an easy pick here.

No matter what your criteria is, this has to be the shot of the year. It had everything. It had the high stakes of a packed Sunday major leaderboard. It required a precise amount of fade in a pressure moment. It was an opportunity for an "I've arrived" moment from Collin Morikawa and he absolutely delivered. Making the putt was huge too, but we'll always remember him for stepping up and hitting that tee shot in that moment.

Morikawa is just so impressive for a 23 year old. He's part of that young trio who came on Tour last year along with Wolff and Hovland. Each have delivered the goods in their own right, but Morikawa clearly has the leg up by being the first to nail down a major. Kawa taking down JT at Muirfield in the Workday Classic was another big time feather in his cap too. Most impressive is how confident the kid is. He was gleaming with pride after winning that PGA Championship, but he also had this determined demeanor that this is just the beginning and he's by no means satisfied. This was supposed to happen. And he made it happen with that glorious tee ball on 16.

What an unreal back and forth from the world's #1 and #2 at the BMW Championship. DJ was coming off that monster win at the Northern Trust and found himself on 18 on Sunday needing birdie to get into a playoff with Rahm. He hit the green at 18, but made what should have been a fatal error by leaving the ball up on a shelf above the hole. Then….

So of course Rahm makes nearly the same exact mistake as DJ did. Did that matter?

Unreal finish, and I didn't think we'd get one that would top the Workday Classic finish and that's exactly what we got.

This was one of the best stories of the year. Sophia Popov went into the Women's Open Championship ranked the 304th best player in the world. She walked away the Champion, joining Ben Curtis as the only golfer to ever win a major ranked outside the world top 300. But really her entire story deserves a ton of praise. She was a national champion and All-American at USC. She played for 4 years on the LPGA Tour, battling Lyme disease and various injuries before losing her Tour card late in 2019 by bogeying the final hole of her season. COVID gave her an opportunity to regroup and she grinded on the Cactus Tour, winning a few events and a whopping $9,000 there. She also caddied a bit for another LPGA player just a month before this Open Championship, which allowed her to think more about the strategic and mental elements in her game. The LPGA needed some Symetra Tour (the LPGA's version of the Korn Ferry Tour) players to fill out a field in Idaho, and she took advantage by placing 9th. That qualified her for the Women's Open and she won the damn thing by 3 strokes. Very cool to see someone who started the year down and out and turn things around.

Stinger of the Year - Bubba Watson

The shot-shaping king. Who else?

Sand Save Of The Year - Collin Morikawa

Incredible. This would have been an incredible occurrence any time any where. For Laurent to do it in a PGA Tour Pro-Am on camera WITH ONE ARM is just awesome. Awesome awesome awesome.

Disappointment of the Year - Rickie Fowler 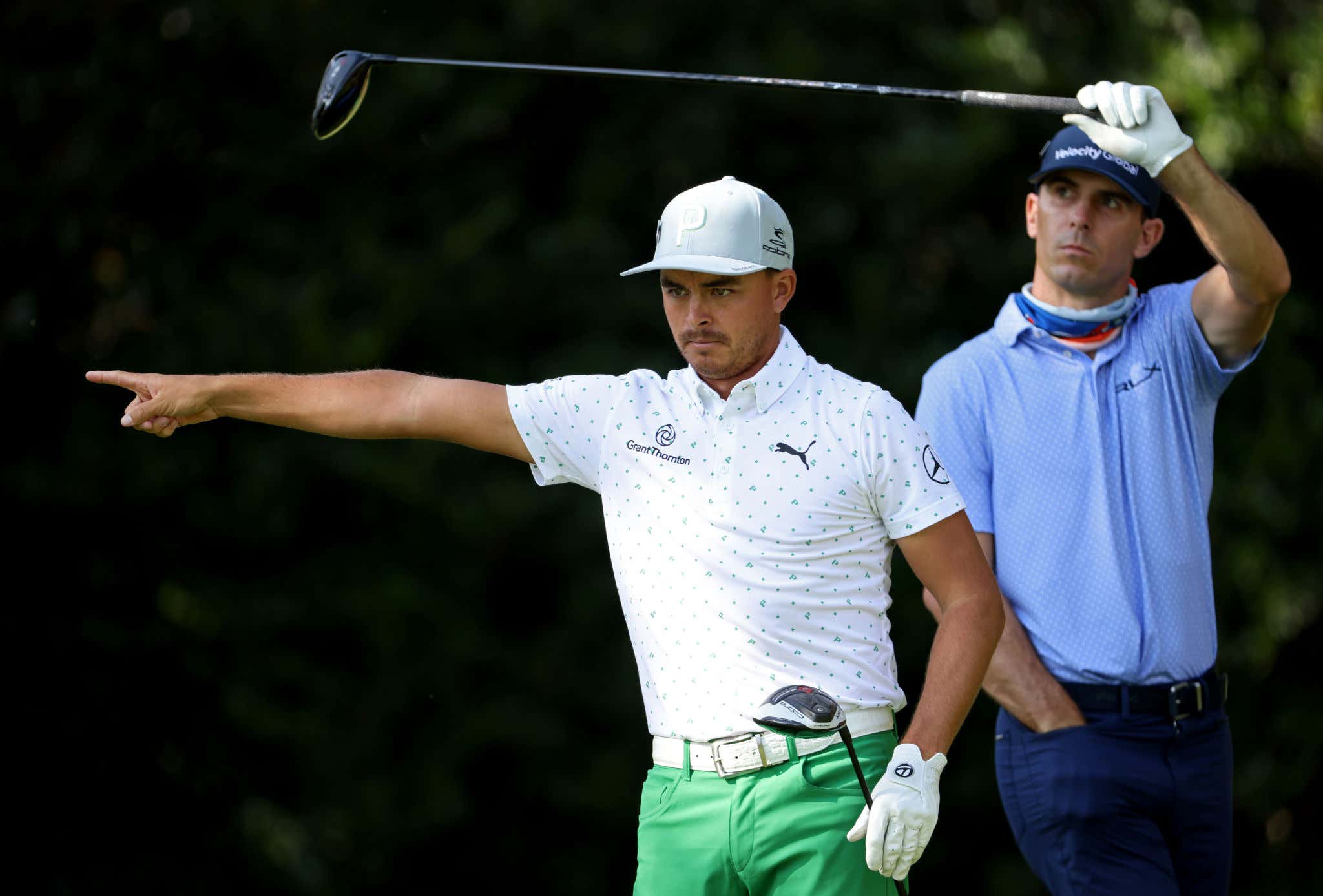 It's been well documented that Rickie had a bad year. I documented it quite a bit going into the Mayakoba that Rickie was playing for the right to stay in the world's top 50 at calendar year end. That would have earned his usual ticket to the 2021 Masters. He missed the cut and failed to accomplish that feat. He currently sits at 53rd in the world and has some work to do to get back inside that Top 50 before another (and final) cut-off 2 weeks before the Masters.

What's wrong with his game? Your guess is as good as mine. But I couldn't help but do some research when I read that Rickie was actually the 2nd best player on Tour during morning tee times, and one of the Tour's worst in the afternoon. The research I found was fascinating. For most of his career, Rickie was a player who thrived in afternoon tee times and was middling in the morning. Sometime between 2016 and 2017, that trend flipped. The numbers: 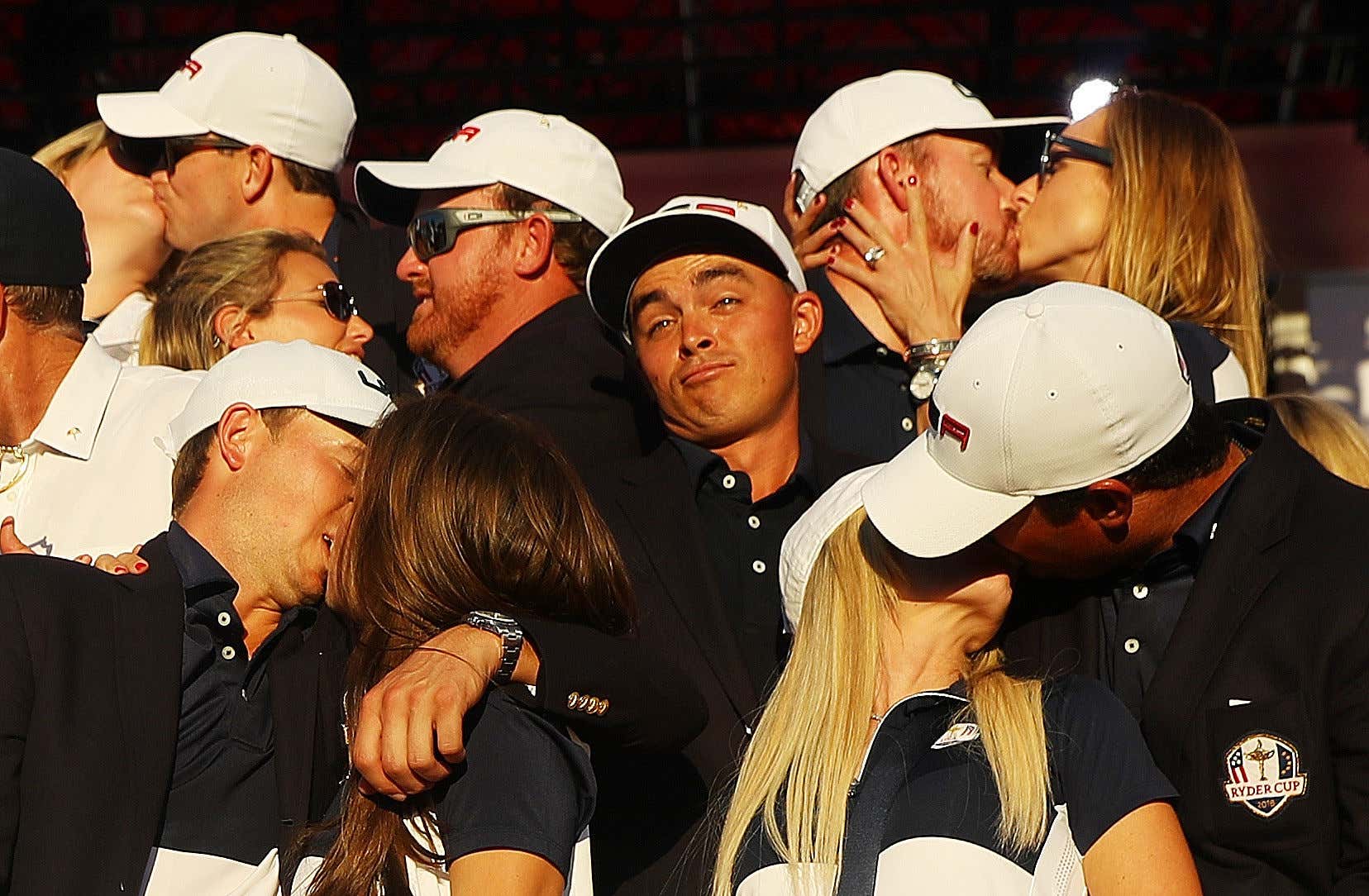 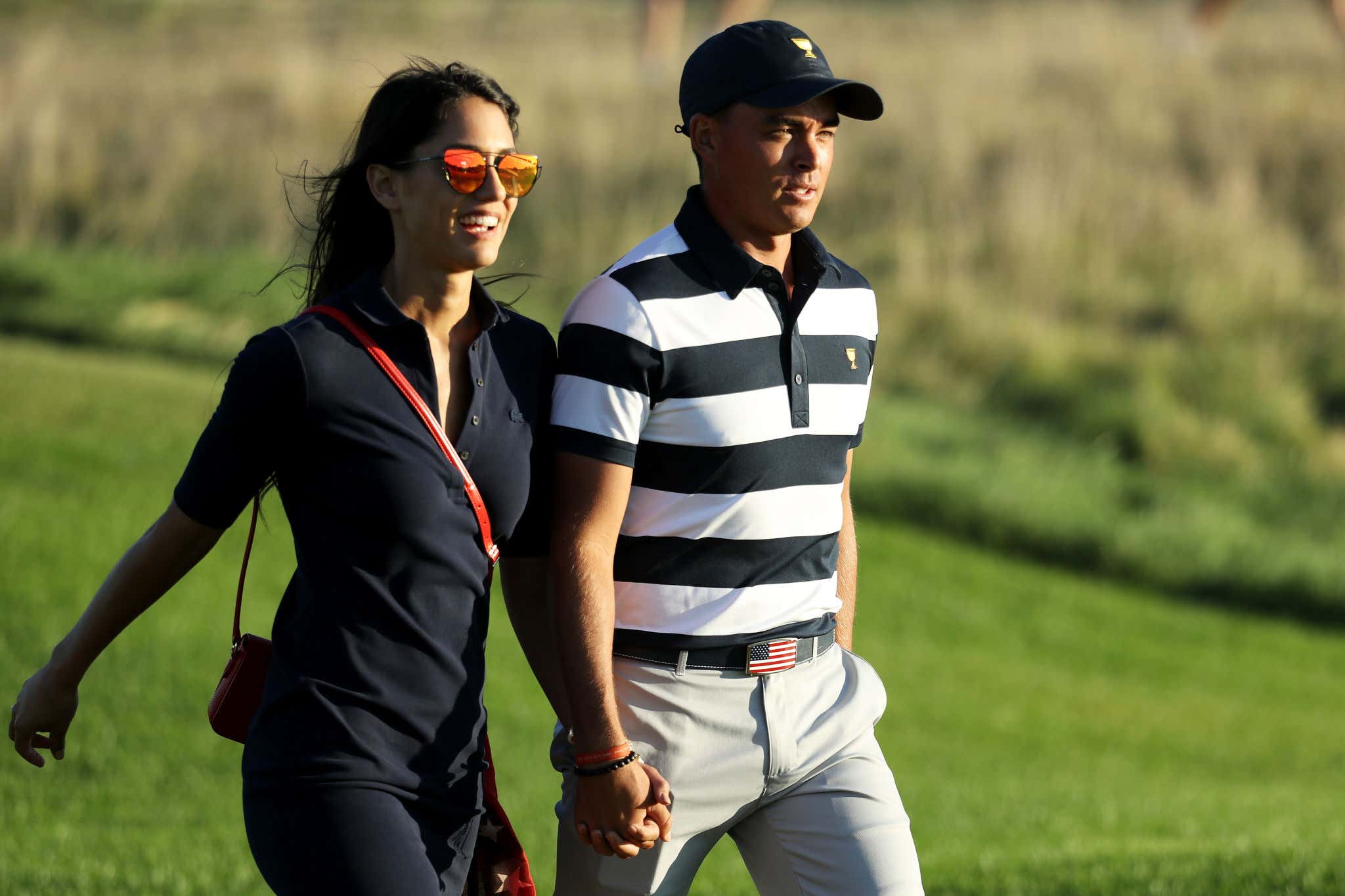 There's probably nothing of substance here… at all. In fact, I'm sure he's just a minor mechanical tweak and some putt luck away from being right back to his normal self. But it does make you think…

Newcomer of the Year - Charlie Woods

Duh. What a marketing onslaught by the Woods family a few weeks ago. Charlie Woods has stormed into our lives like a hurricane. We had seen those videos of him warming up at the range at his youth tournaments leak out little by little. Then it was the stories that he was winning. Suddenly Tiger announced that they would be playing the Father-Son event and everyone went crazy with anticipation and expectation. Charlie freaking delivered. The swing, the shots, the mannerisms… all of it was everything we could have hoped for. He was the youngest player in the history of that event and him and his old man finished 7th out of 20.

I know we're all supposed to keep the hype to a low roar because the kid is only 11 years old but that's a tough task with what we saw. I actually see a lot of Rory McIlroy in his swing. And Elin is 5'11, so Charlie is going to grow to be a few inches taller than his old man, who's 6'1. If he's got Rory McIlrory's powerful 5'8 swing in a 6'5 body and Tiger Woods' DNA and feels…. it's… it's over for everybody if Charlie wants it to be. I need to stop. I'm off the rails. He's 11. He's 11. He's 11. Somebody take away my blogging keys. 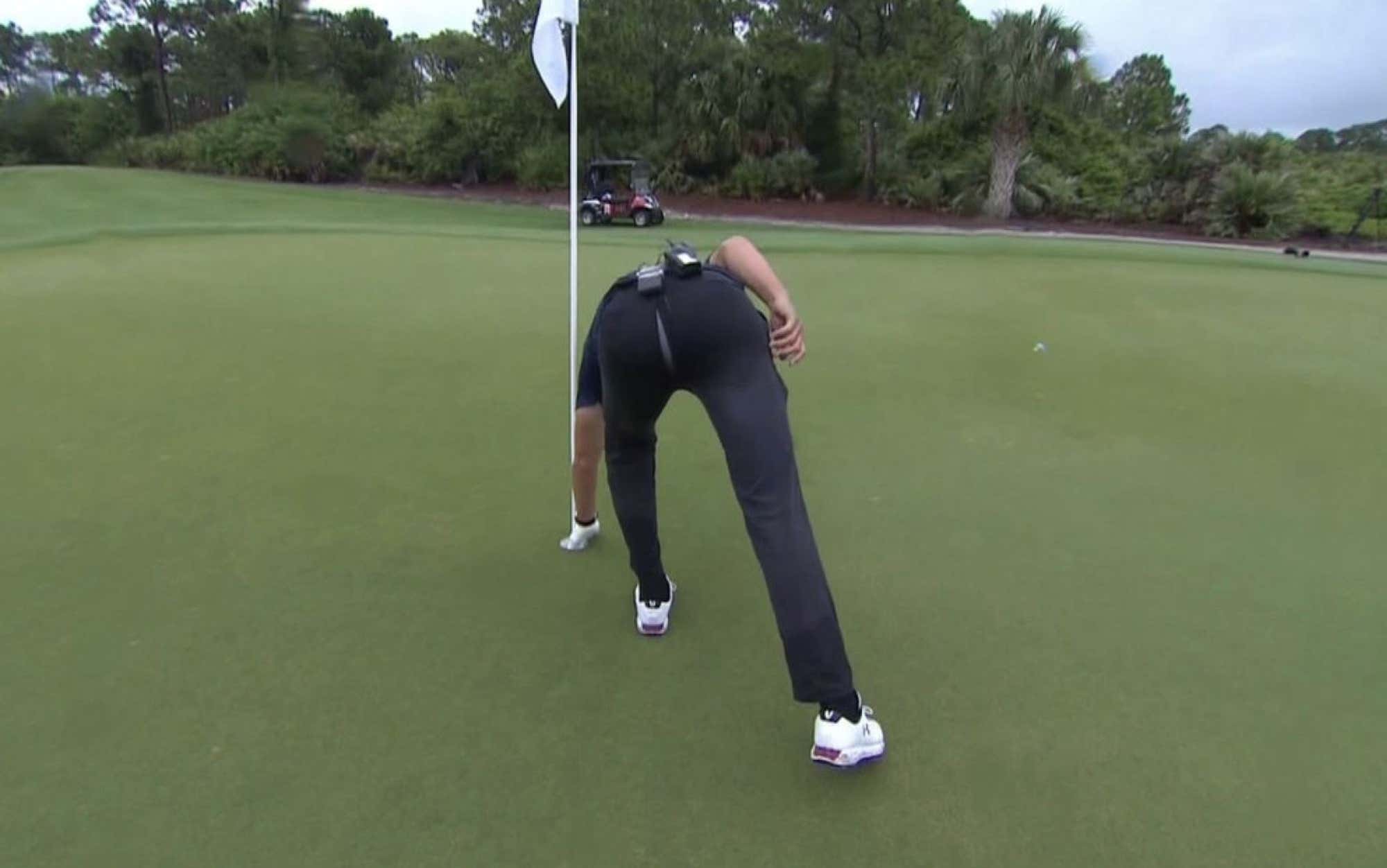 Am I giving him this award for the backspin or the pants? I'll never tell.

Flop of the Year - Jon Rahm

Penalty stroke or not, this was a helluva shot. He had been in control of the Memorial Tournament for most the day and was up 3 on the par 3 16th tee, but tugged his tee shot in the one place you really couldn't. Buried in produce, short-sided, above the hole, greens as fast as glass… most PGA Tour players would simply play it safe and take a 5 out of play by hitting it 10+ feet past the hole. Two-putt 4 is what the situation called for there and if you can bury a long par putt, even better. Rahm? No thanks. I'll just bury it now, he says. 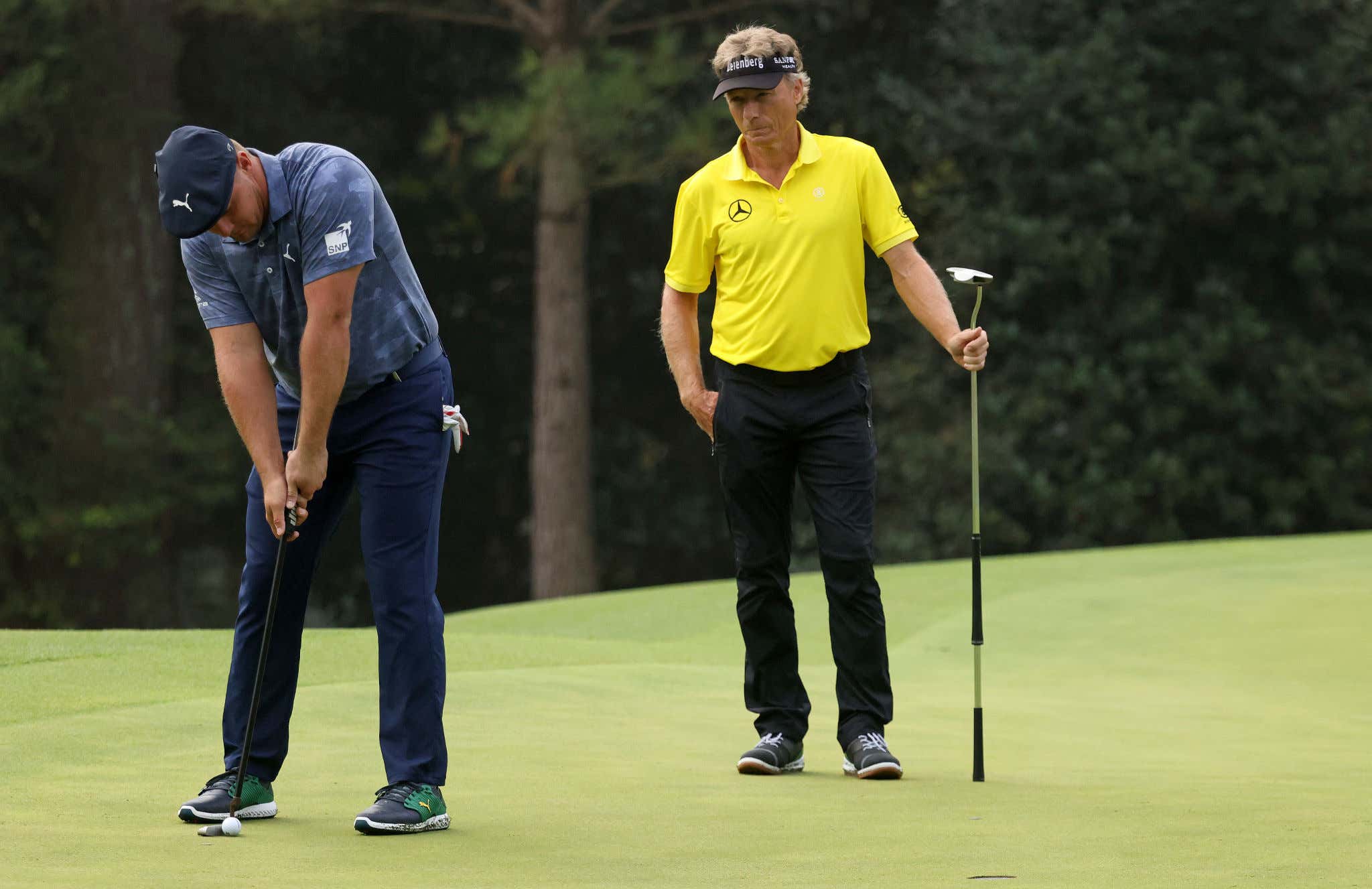 Bernhard Langer is the man. Bryson Dechambeau also was one of the most polarizing stories in all of sports this year. I covered the trevails of these two soup to nuts over Masters weekend. Both of these guys defy science. The way Bryson hit the golf ball progressively further and further all season made no sense. What Bernhard Langer does in his 60's at Augusta and on the Champions Tour every year makes even less sense. The intersection of these two playing together on the weekend and Langer coming away victorious felt like the golf gods sending a message that golf is a beautiful game that rewards feel and imagination over power. Always has been, always will be. Also Bernhard Langer is the man.

That's all I got for this year. We've got about a week left until the 2021 golf calendar starts with the Tournament of Champions down in Hawaii. Can't wait.