Last week I wrote a blog about how I am at war with "Quest Nutrition." Home of the Quest bar.

Since then me and Quest have actually cleared things up. We are now on good terms. I write this while eating an Oatmeal Chocolate Chip flavored Quest Bar. 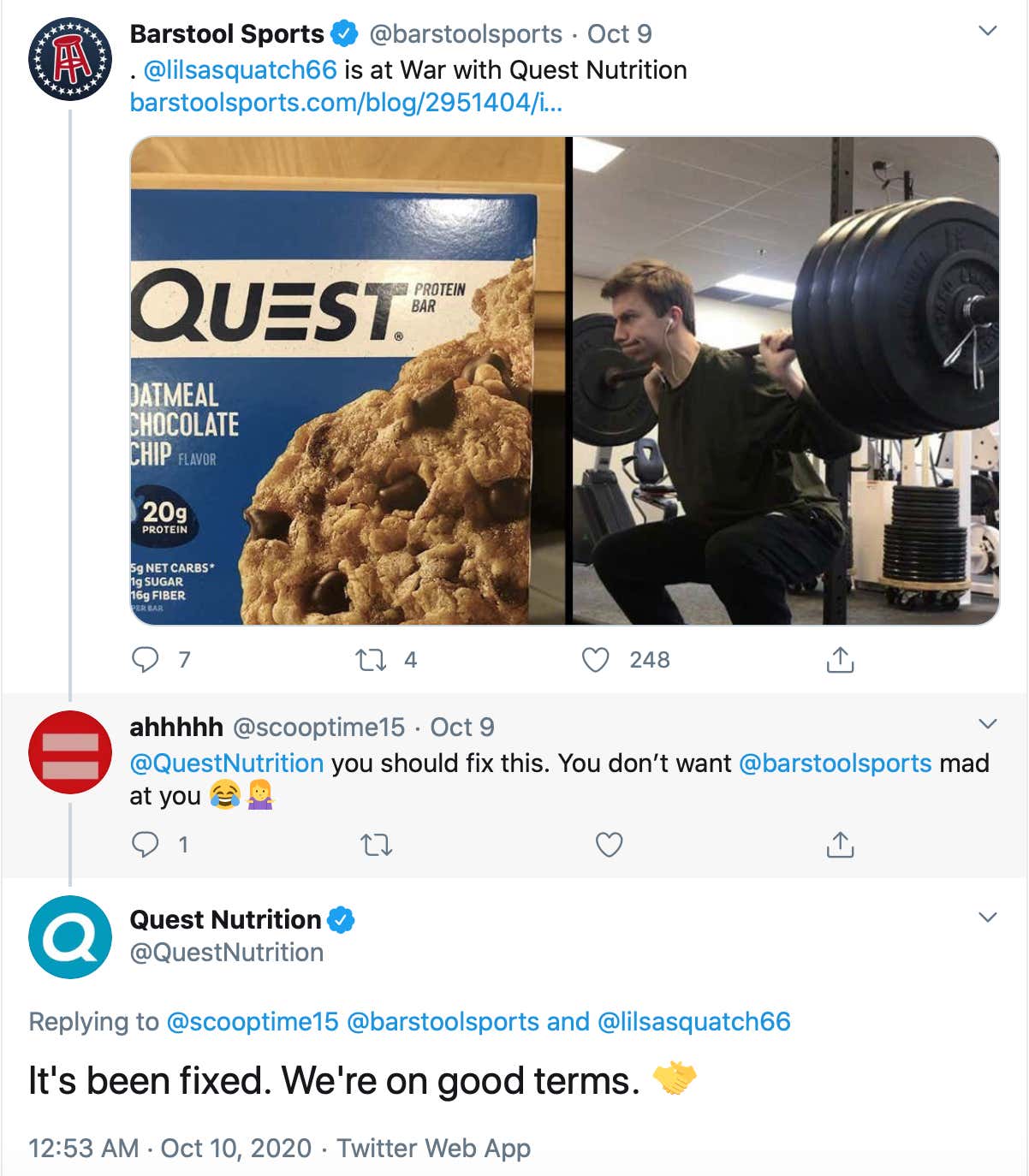 This is a classic big corporation fucks over the common man scenario. Let me explain.

Let's go back in time to a week ago today. Monday October 5th. My girlfriend (who is real) was in NYC visiting me from North Carolina. She was here all weekend and was leaving Monday night. I went with her to JFK airport, said goodbye, and ordered an Uber to go home.

This is where the trouble begins. My Uber arrives.

We depart from JFK and head towards Manhattan. While leaving the JFK parking lot the driver turns to me and asks if he can see my phone and double check the address, just to make sure he's going to the right place.

I handed him my phone and thought nothing of it. I just wanted to get home.

However, it was definitely a little alarming when the Uber driver was holding MY phone, opened up the Uber app, and canceled the Uber.

Now I'm on the highway headed towards Manhattan in a completely random car with a completely random man. I'm new to the city so I've never really experienced anything like this. My first thought was that I was either being kidnapped or he was just going to try and make me pay in cash. Considering he didn't throw my phone out the window or smash it to bits, I thought the second scenario was more realistic.

For the entire ride I contemplated what I was going to do/say when we arrived at my apartment. I knew he was going to try and make me pay in cash, which I didn't have.

I really only saw three options here. We would arrive at my apartment and I would either A) Run away, B) Fight the driver, or C) Pay the driver and sort things out with Uber afterwards.

I decided to not be a pussy and go with option B. I was gonna beat the fuck out of this guy. Me and him. To the death. Over a 30 minute drive. Famous Muhammad Ali quotes ran through my head as I prepared for what was about to be the most chaotic and most deadly fight of my life. The only fight of my life in fact.

"Float like a butterfly, sting like a bee. His hands can't hit what his eyes can't see. Now you see me, now you don't. My uber driver thinks he will win, but I know he won't." Ran through my head in Muhammad Ali's voice.

I'm ready to go. This guy has absolutely no fucking chance against me. I'm the alpha. I am the king. He will suffer.

This next part of the story is where my man card was completely taken from me.

He pulls out some third party taxi app on his phone and the total comes out to $150. Which for those who don't know, an Uber from JFK to Manhattan is about $60-$70. So I payed over double of what I should have. I handled it like a total bitch but I decided option C was the most realistic (I didn't wanna fuck this guy up too bad).

I got into my apartment and instantly started googling Uber support lines that I could call. I mean this guy is blatantly scamming people. He uses the uber app to get customers and then scams them once they're already in his car. This feels like the kind of thing that you could easily sort out with Uber. Apparently I was totally wrong. Uber doesn't even have a public support line number.

I eventually got in touch with someone from Uber and they did an "investigation" which means they did absolutely nothing. They informed me that I got in the wrong Totoya Highlander that happened to have the same license plate as the Uber I was supposed to get in with a driver who must've been the actual drivers Identical twin who also happened to know my name. Pretty crazy coincidence.

So now I'm down $150 and there's absolutely nothing I can do about it. Tough luck.

Not much of a "war" I guess it's more just Uber totally fucking me in the ass and there's literally nothing I can do. Fuck Uber.

Side note: Never give an Uber driver your phone. I didn't think anything of it but pretty stupid of me looking back on it.