Source - Police in northern Spain pulled a surfer infected with coronavirus from the sea for breaking self-isolation rules and charged her with public health violations.

Officers descended on a beach in San Sebastian on Monday after they were tipped off about the woman’s flouting of the public health law by her own colleagues, reported the Euro Weekly website.

The unidentified woman reportedly resisted police commands to come out of the water for an hour. Viral video showed her swimming to shore and attempting to flee officers.

She eventually was detained by two officers in protective suits, marched away in handcuffs, and charged with disobeying the authorities and crimes against public health.

Let me make one thing very clear, coronavirus is not funny. Nothing about it makes me laugh or is even the slightest bit entertaining. But I'd be lying if I said I didn't giggle watching this dude run across a crowded beach in a hazmat suit... 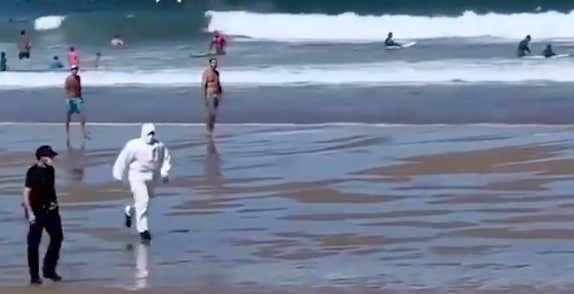 I mean that's just goofy, right? Commendable but goofy. He looked like one of Dr. Evil's henchmen with the amount of distance between him and the perp. But hey, anything to keep the people safe. The lady in question was detained and charged so mission accomplished.

It's still not as good as this though…

The greatest low speed chase of all time. Something about being in the water makes people feel like they can do anything. Oh well. Hopefully that lady paid her fine and didn't infect anyone in the process. Stay safe out there people.