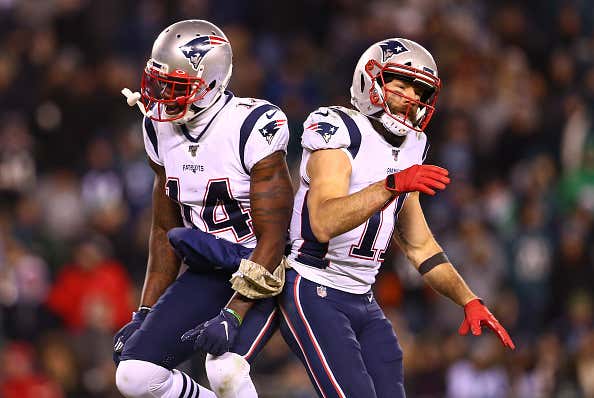 There a few things that large segments of the population love doing more than they love ripping GM Bill Belichick for the grave disservice he does to Coach Bill Belichick. And not many things that satisfy my soul as much as defending GM Bill, whose track record has more successful deals, draft picks, draft day trades and free agent signings than anyone else's. By an order of magnitude, despite the misfires on his 21-year resume in New England. There's a reason every owner in 31 markets would turn their GM into Soylent Green and feed him to Nike the Dog if it would please GM Bill enough to even consider taking their job.

But there's no Belichick Infallibility Doctrine at work here. Mistakes do get made. Nor is there any way to polish the turd that is sending a second round pick to Atlanta to get a receiver whose Patriots career numbers are now etched in stone for all eternity:

And it gets worse when you look at it in conjunction with the signing that failed miserably, thus necessitating the trade::

We can forgive the Sanu trade in terms of how much it needed to be done because the team was desperate and Tom Brady was clearly miserable and getting miserabler by the day. Sanu came to New England with almost 400 career receptions and exactly 4,300 yards, plus playoff experience and a great reputation. It's one of those "It seemed like a good idea at the time" things. But then that's the kind of thing you say to justify a lot of bad decisions after the fact. Often when you're waking up in a puddle of your own sick next to a homely stranger. And short of you or that stranger winding up pregnant, choices don't get ,much more regrettable than this one.

Which begs the question where it ranks among the worst trades of the GM Bill Epoch. For the purposes of this list, I'm not going to include swaps of draft picks. I've already written volumes about how he manipulates the draft board to create value from the picks he gets, which have typically been at the very back end every round. So instead I'll let Dwight Schrute explain:

Instead I'll limit it to trades of players for players and players for picks. One that won't make this list is Drew Bledsoe to Buffalo for a first rounder. They got Ty Warren with that pick, for a QB who had been replaced. That is a Steal of the Century stuff. Listed here from bad to worst:

I know I have this lower than most people. The conventional wisdom is that Cleveland was sitting there with a basket filled with high first rounders just dying for the Pats to call. That is a myth. It's been confirmed by the Browns' coaching staff that the front office emptied out at 5 p.m. on the day of the trade deadline and never showed any interest in Jimmy G. Add to that the Pats had no choice but to move him, unless they were going to release Brady for a backup who had played a total of six quarters in his career. They went to each of the next two Super Bowls, winning one. And the fact that they got back Brian Hoyer from San Francisco in return, the single most under talked about, under-appreciated aspect of this trade. Reliable backup QBs who know your system and that you trust to keep your team afloat if disaster should strike (which came perilously close to happening in the playoffs that season) aren't just sitting around on everyone's roster.

7. 2016: Chandler Jones for G Jonathan Cooper and a second

Trading Jones was your classic Patriots decision. His contract was about to come up. The league notoriously overpays for outside pass rushers and they do not. Not to mention in the playoffs that January he wandered shirtless into the Foxboro Police station all hopped up on goofballs. And Cooper had been the seventh overall pick just two years earlier, so it seemed like a steal if Dante Scarnecchia could coach him up. It turns out he couldn't. Cooper didn't make it out of camp, but he did permanently make it out of the NFL in 2018. What mitigates this one is they flipped the Cardinals' second rounder for picks that went for Joe Thuney who very much can play guard, and for Malcolm Mitchell who, in his one season, was instrumental in winning a Super Bowl.

This one only ranks so low because eventually it brought them Nate Solder. But to get him, they had to trade the Hall of Famer who for my money is the second best player of the Dynasty Era, then wait a full year. In the meantime, Seymour was in Oakland going to two Pro Bowls while the Patriots rolled out some of their worst defenses. Including the 2009 one - the most unlikable Pats team of the 21st century - that got rolled over in the Wild Card game at home by Baltimore. The first play from scrimmage was an 83-yard touchdown run by Ray Rice, right through the left side of the line, where Jarvis Green was instead of Seymour. Green never even saw Rice blow by him and the rout was on.

Maybe no one will ever mourn the loss of those two picks on the last day of the draft. But I would take literally any college prospect they might have returned over Ochocinco's 16 reception season. SIXTEEN. And that total includes the one catch he made in the postseason. In 17 total games, a number which isn't higher because he was a healthy scratch in one playoff game. What a disaster he was. If any average WR had his roster spot, the Pats might have won The Super Bowl That Shall Not Be Named Part II.

This is really where these start to hurt. Wright was only 24 and at 6-4, 245 lbs there was hope he'd give Brady another one of those "weapons" everyone loves to talk about. And while he did end up getting a ring, he only caught 26 balls and was gone the next season. More importantly, that pick ended up being Trey Flowers, so a huge win there. But giving up Mankins was one of those things were a franchise kind of loses its soul. Not only was he a six time Pro Bowler and a one time All Pro, he was that guy you love to have on your roster as an example to the younger players. He once played an entire season on two torn ligaments in his knee. And he is the second best guard in franchise history who went on to make another Pro Bowl in Tampa. They replaces him well enough to win Super Bowl XLIX without him. But still.

Remember Starks? Nobody does. He didn't last half a season and was most known as the cornerback we compared other bad cornerbacks to. As in "Jonathan Wilhite is a 7.5 on the Starks Meter."

It might sound odd to have a trade that netted a first rounder so high. Especially since Branch forced Belichick's hand by holding out. But again, they had to wait a year for the pick. And that year was 2006, where their top wideouts were Reche Caldwell and Troy Brown as his sell-by date expired. Not having Branch made starters out of worthless depth guys like Doug Gabriel and Jabar Gaffney. That season ended in the AFC championship game in Indy, where one first down in the 2nd half could've made all the difference and Caldwell dropped a ball in the end zone. The NFC champion that year was a very average Bears team so not having Branch probably cost them a ring. And that 2007 pick went for Brandon Meriweather, who actually made two Pro Bowls. But he was also a head-hunting penalty machine whom they let go of at the end of his rookie deal, so it mitigates very little.

I acknowledge it's weird to put a move that only cost you such a late pick at the top of this list. But I would've rather they took that fifth, left it at the end of the driveway with a "FREE DRAFT PICK" sign taped to it and hoped some other GM hauled it off then to have spent it on Haynesworth. They took this notorious asshole hoping he'd come to New England and a strong locker room fill with leaders would lead him to the straight-and-narrow. What they got was more of what he was already famous for. Which was this:

He didn't make it past his sixth game in Foxboro before they released him. It says everything that he's the second worst person the Patriots have had on their roster, behind only a convicted murderer.

Since I have to come to a conclusion though, I'd put the Sanu trade at the top of this list. Let's hope it stays there for eternity.