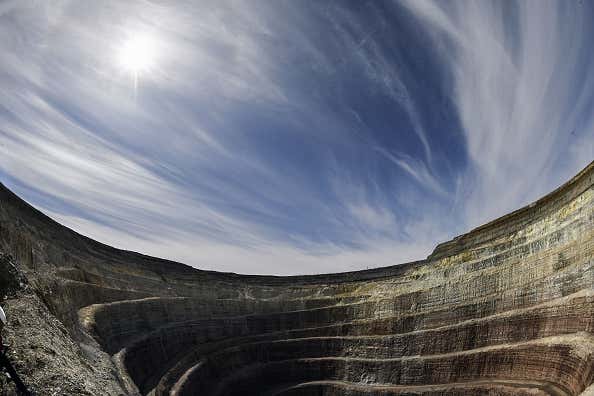 That there is the Mirny Diamond mine in Siberia, Russia. A massive, MASSIVE hole in the ground. Over 1700 feet deep and a half mile wide. Second biggest hole in the world. If you're thinking, "what is so interesting about a hole in the fucking ground in the middle of nowhere Russia?" I wouldn't blame you. To me though, this is the 5th most interesting hole in the world behind the Qattarra Depression and I'll let you guess the other three.

The story starts way back in 1955. The Cold War was raging and the Soviet Union was desperate for money because as it turns out...communism is, how do I put this delicately...it's bullshit. Stalin blew all of Russias money on nuclear bombs and strogonoff and someone had to come into his office and say "hey Stalin...we are running out of money"

Stalin probably had that person killed, but then got to work trying to come up with a scheme to get more cash for Mother Russia. He just paced around his office, twirling his mustache, trying come up a plan. "hmmm, what is worth a lot of money, hmmm, hmmm....DIAMONDS!".

So Stalin sent out a team of geologists to find diamonds in Russia and you know what...they did. Only problem was that the diamonds they found were in the middle of Siberia. 5000 miles east of Moscow. A place due north of Mongolia. Really fucking far from anything except probably prison camps for Ukrainian people who dared to complain about having their children starve to death. Which is good because opening a mine in Siberia was probably going to end up killing a lot of people. That was no concern of Stalin

The average winter temperature in Mir, Siberia is -40 F. That is cold enough to freeze oil and truck tires at that temp can shatter like glass. And that winter lasts roughly 7 months. When it "warm" in the summer the permafrost just turns into this thick, soupy mud that is nearly impossible to dig out. The Soviet crews had to use jet engines to thaw the ground enough to make explosives effective. And yet...they managed to dig down 1700 feet and it was worth it. BIG time returns on this diamond mine. Like... 10 MILLION carats of diamonds per year in the 1960s. They literally found some diamonds the size of golf balls. The Soviets dug up around 13 billion dollars worth of diamonds. All told, the mine produced nearly half of the diamonds in the world.

The mine was so productive that it began to threaten the deBeers diamond cartel's control on the international diamond market. When DeBeers asked to inspect the mine, Russia finally granted them permission after 6 years of stalling and when they finally gave DeBeers reps travel visas they delayed them so much in Moscow that they only had 20 minutes at the actual mine before their visas expired. Classic Soviets.

The mine finally closed in 2004 after severe flooding and now...to the title. This is so fucking big that it kind of produces it's own weather patterns. When the warm air from the mine meets the cold air on the surface it creates a vortex so strong that it can pull down helicopters and small planes. After this happened several times, the Russians put air restrictions over the mine. Anyways, that's the did you know for this week. Have a good day.