The search for a roommate is still going on. And it's getting a little more chaotic than I expected. I wrote about my current living situation not too long ago, and I put out a roommate application shortly after. To summarize, I originally needed a new roommate in August, but that has now been trimmed down to June. I've had a few people message me showing their interest, but their timetables didn't work. I stumbled upon one guy who I thought was going to be my roommate for the 2020-2021 season. 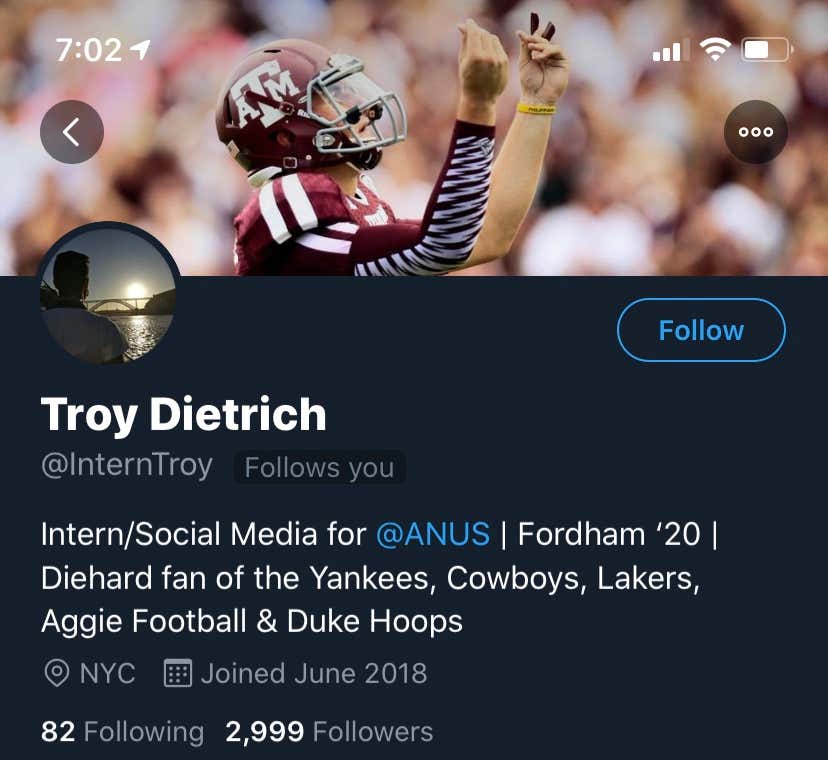 His name is Intern Troy, and he's the intern for one of the most spectacular podcasts in the world, ANUS. Hosted by KB and Nick. Of course he went to Fordham. Who can possibly have a such a random circle of favorite teams? Well, I can name a few people in this company, but that doesn't matter. Anyways, he messaged me about his interest of being my roommate. 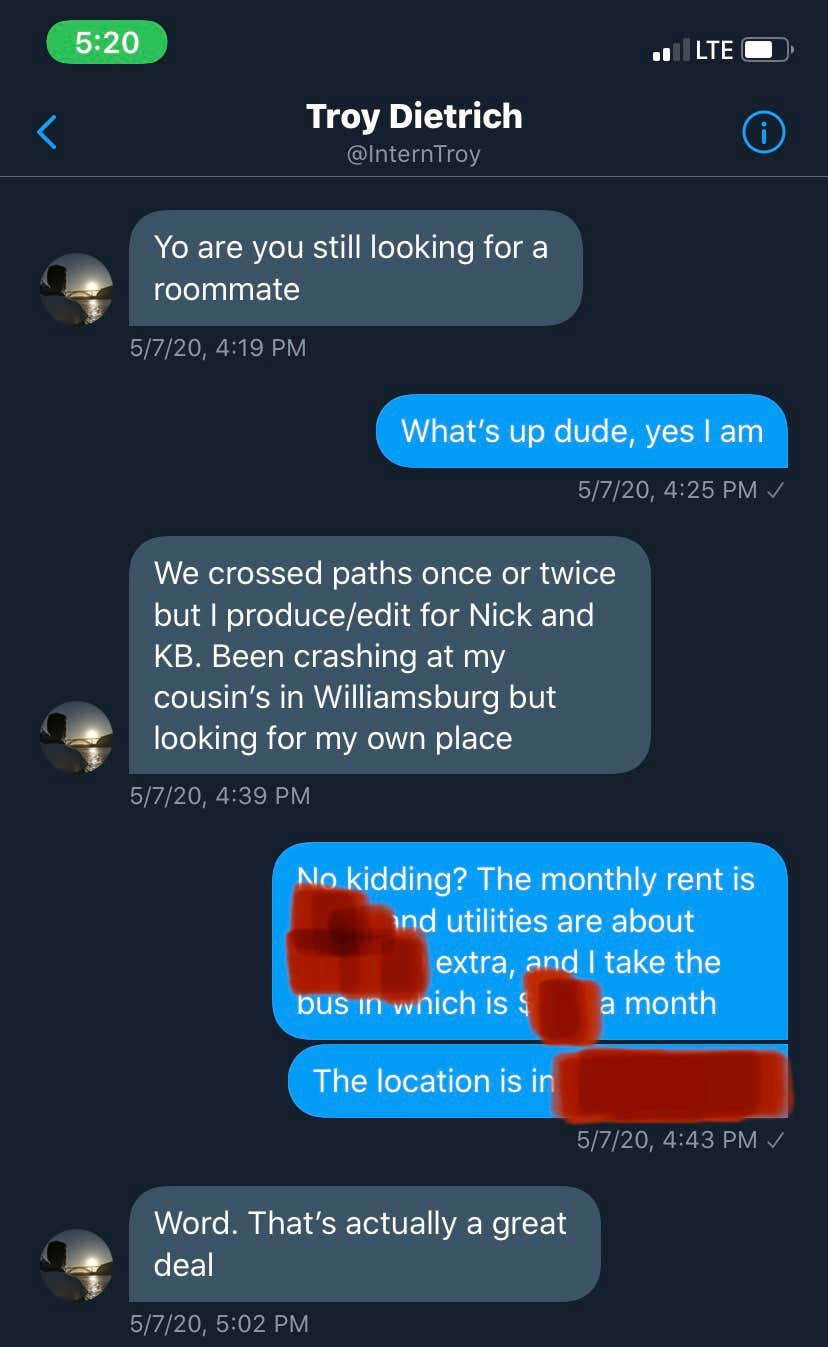 I had a good feeling about this guy. He helps out KB and Nick who are two of the most creative and funniest people in the company, he edits, our weird minds should get along just fine. I sent him pictures of my place, told him the monthly costs, blah blah.

After sending him all of the information he needed, he didn't ask any questions about the place.  All he asked was if I had any allergies. 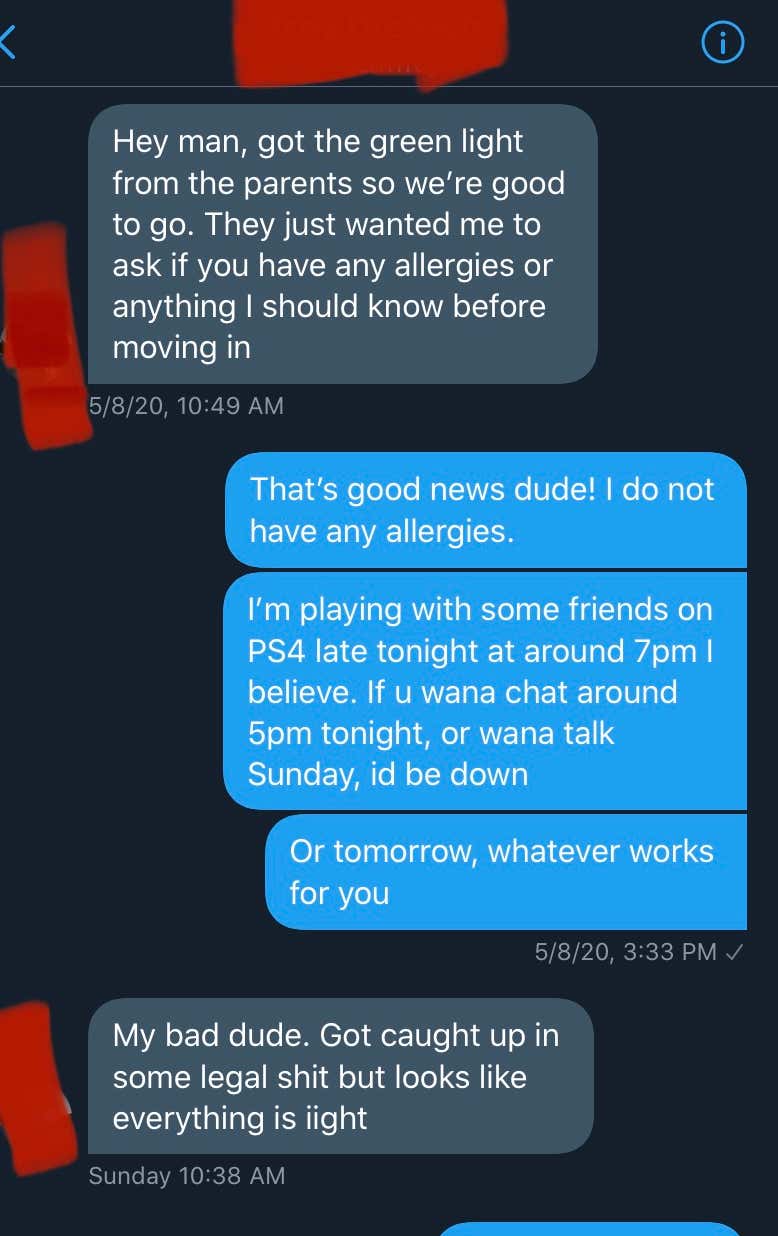 What the hell does "some legal shit" mean? The only "legal shit" I got caught up on was during my junior year of high school. I was driving home from school and was going 30 MPH and forgot the elementary schools were still going, and got pulled over for going 5 miles over the school limit. Thankfully, the cop gave me a warning, but I wouldn't consider that "legal shit". I never told my Mom this and she reads everything I post, so uh, surprise Mom!

I sent this Donnie and he said, "I know plenty of good people who have been caught up in legal shit and you shouldn't judge them based off of that. Fair enough I suppose. I pretended that I didn't read that and told him to text or call me.

Now this is getting really fishy. What kind of "legal shit" did this guy to do be worried about getting his phone tapped over a conversation about moving into an apartment? Can you even phone tap over facetime?? If so, I am blessed to still be here. Anyways, I declared this pitch as strike 1. 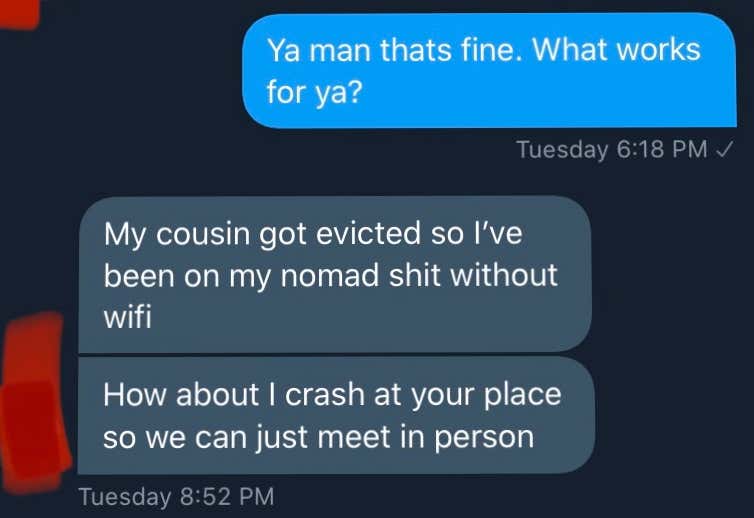 I am officially freaked out by this shit! This guy went from phone tappings, to having no wifi, to straight up inviting himself to stay on my couch so we can meet. Is that normal, or am I just overthinking this? 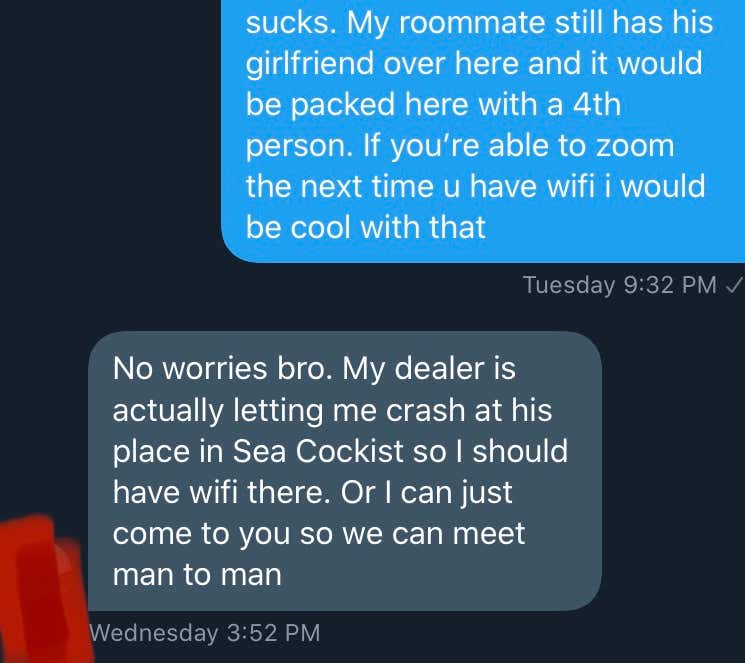 Now he has a dealer?? Strike 2! I made it clear that I don't want any drugs or weed in my place! At this point I'm already checked out, but am still interested to see what cards he has left because this is pretty entertaining to guess what's next!

WHAT!?!? This dude ordered a UHaul before we even made this official! And in the most casual way, he mentions that he's throwing in a SQUAT RACK with some chairs, lamps, and vacuums? Not to brag, but tell me right now where the hell are you going to fit a squat rack in this above average sized apartment? 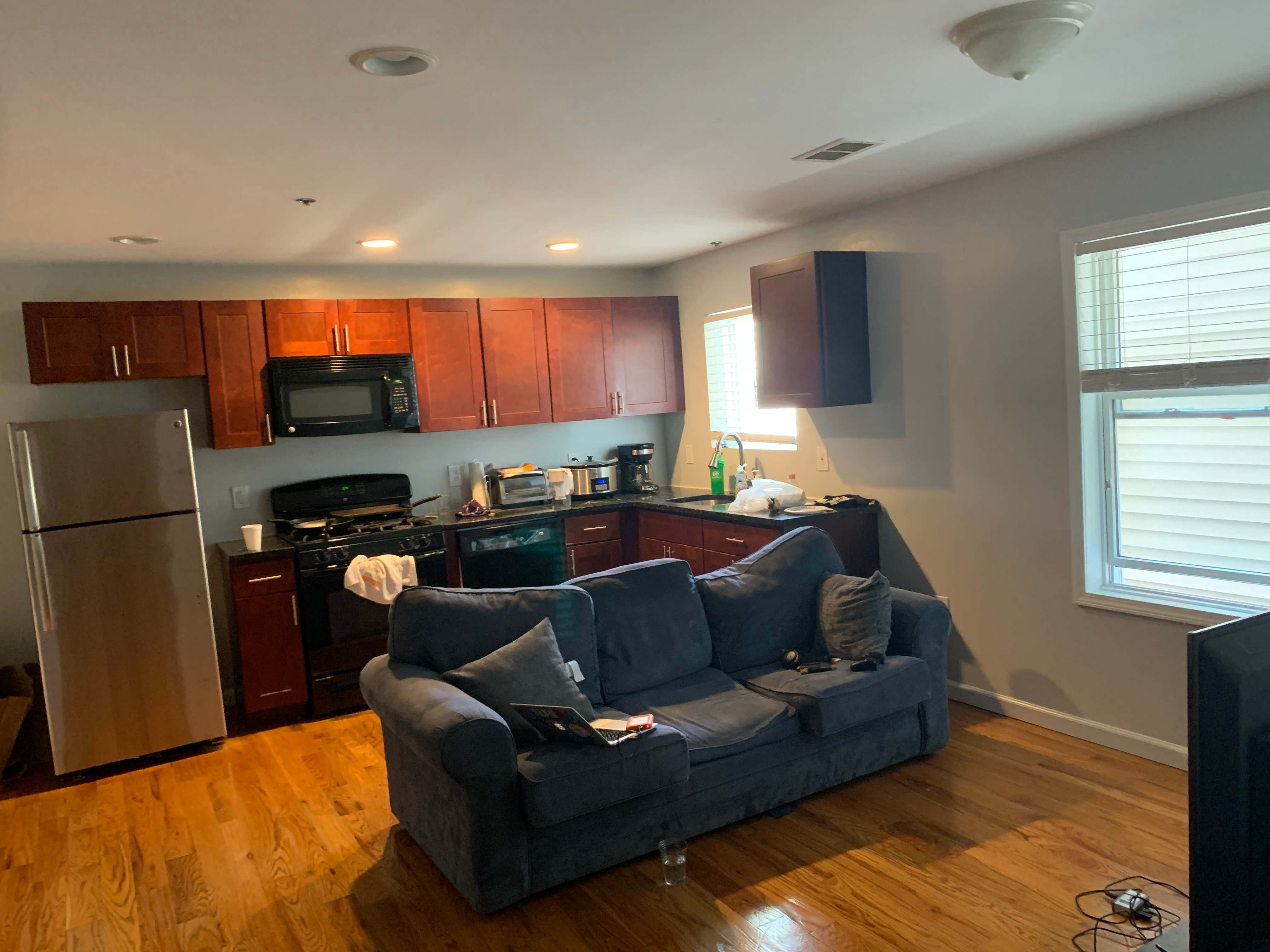 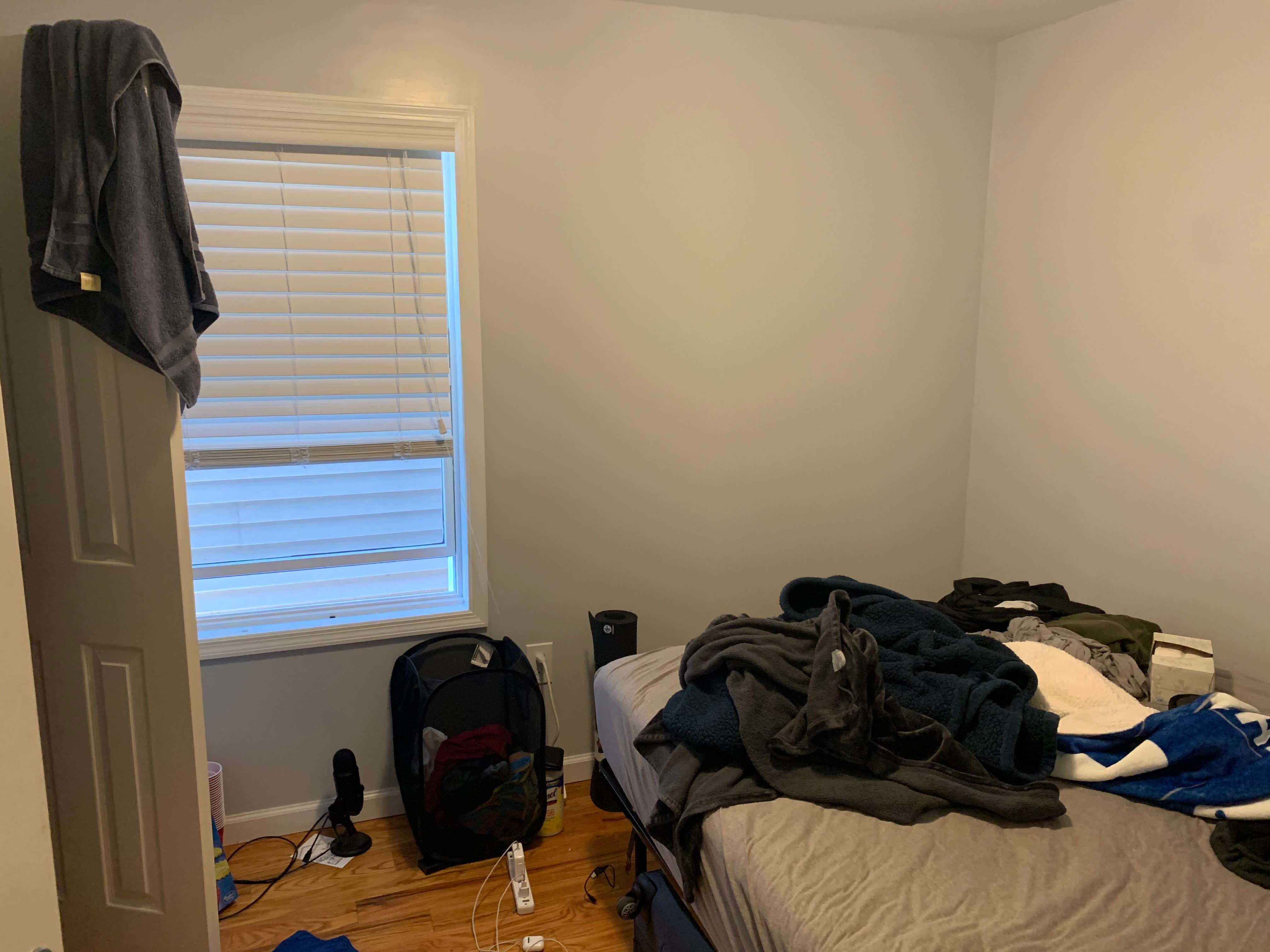 If you want to do 3 sets of 5 on the sidewalk, knock yourself out. But there is absolutely no way in hell anyone can bring a squat rack into an apartment! 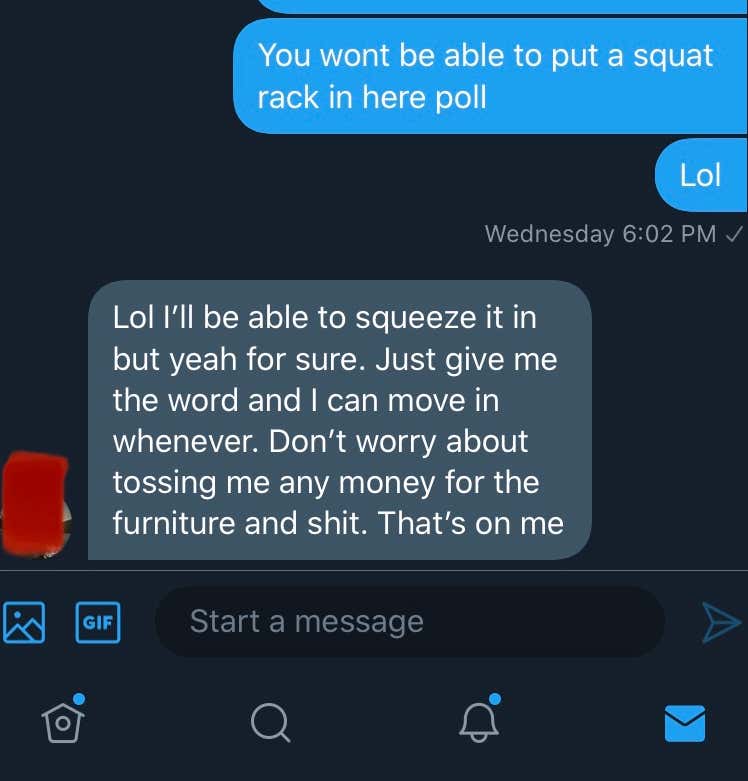 I still wanted to meet this guy because I was getting to the point that this guy might not be real. ANUS only hires smart asses to work for them, and I truly need a roommate in one month. 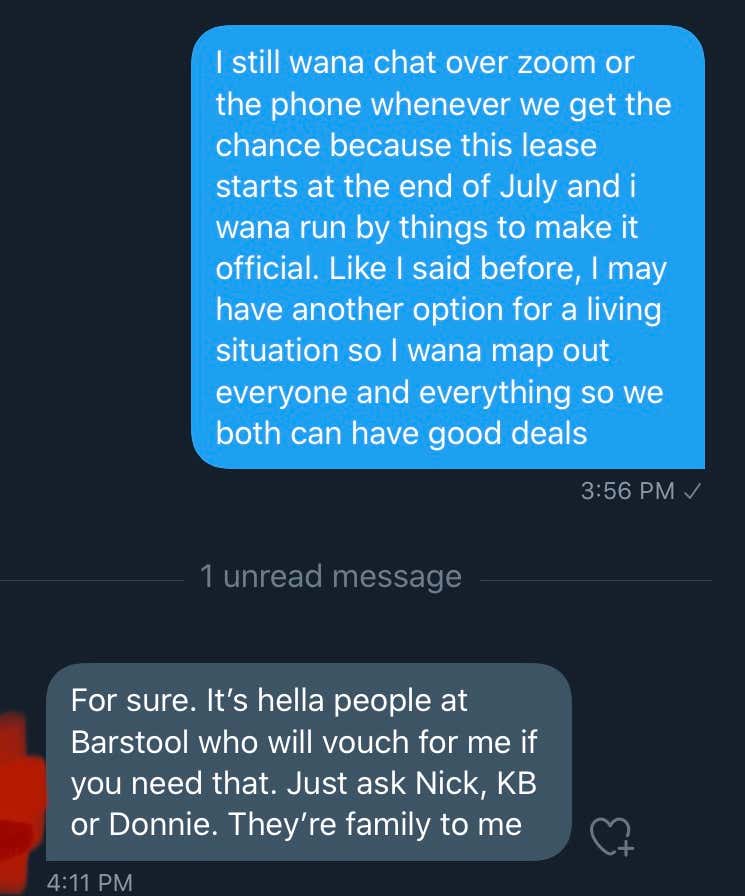 If you insist they're family, I guess it's only right to get a recommendation from all 3 of them. Let's start with Donnie: 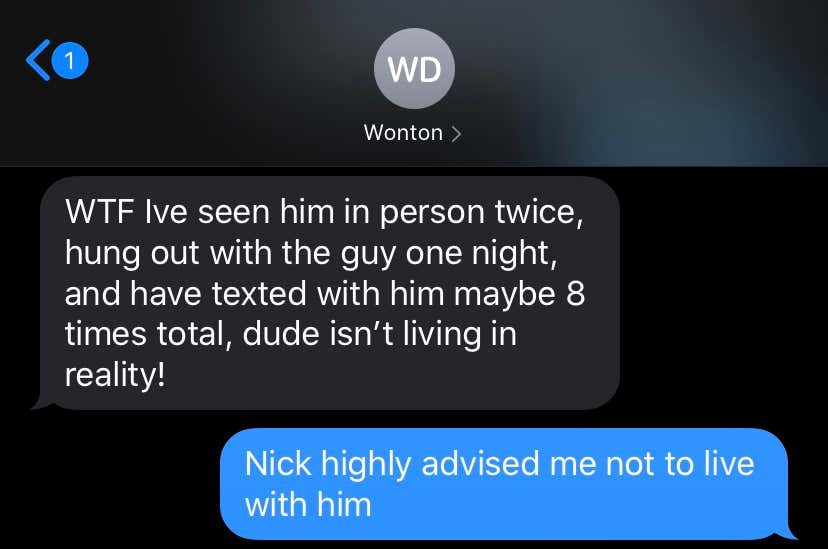 Next up, we got Nick.

Last but not least, a word from KB.

So, maybe this isn't a prank? Maybe this is just a crazy as human being looking for a place to live in the most psychotic way? It was time to bullshit my way out of my offer to this guy and start looking for another applicant. But no fast, Troy had one last card under his sleeve for me. 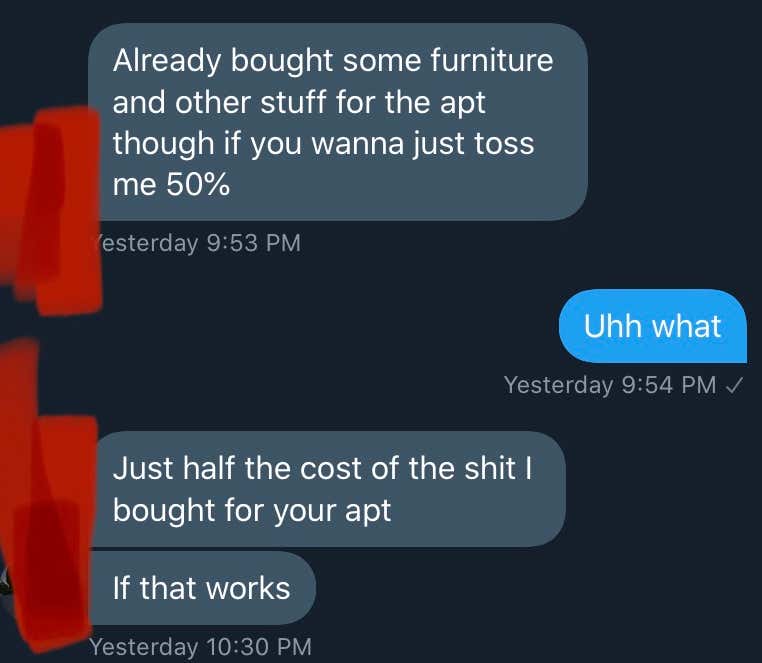 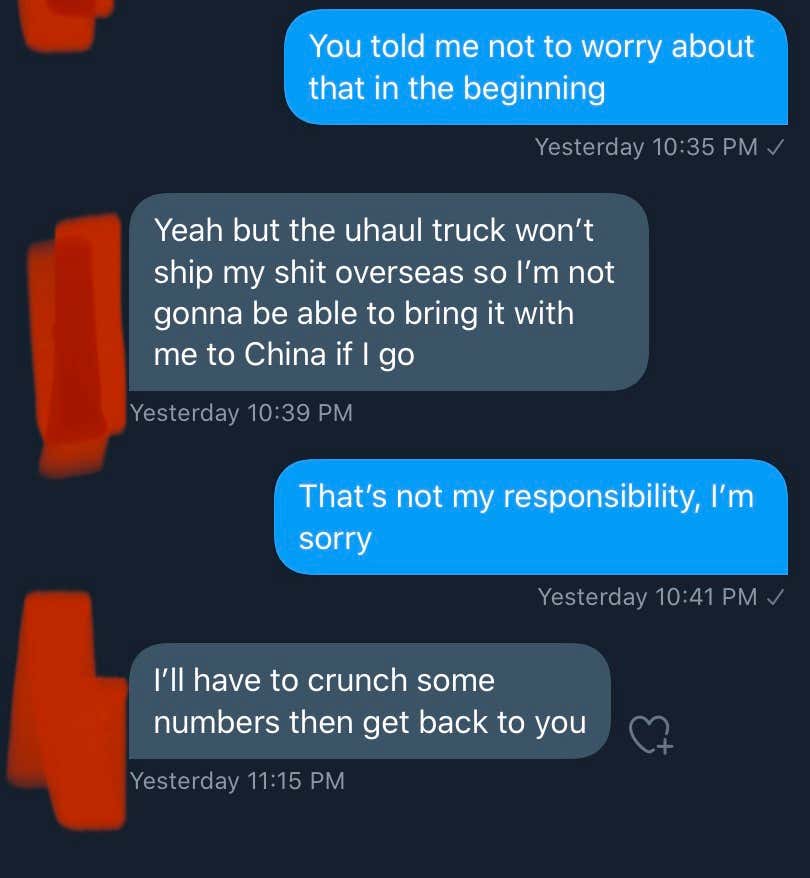 After this, I went back to our messages to find out this account has been deleted. After alerting KB and Nick about this, I asked if they had a picture of Troy that isn't the back of his head.

To end the story, I facetimed Nick and KB and we all just laughed at each others face. I didn't record it, but you can check it out on the next episode of ANUS. If this was a pilot episode of, "To Catch A Mantis" then I must admit it was well produced and well played. With that being said, I am still looking for a roommate. If you or someone you know is interested in being my roommate and doesn't smoke, have a squat rack, or seem fucking crazy, email me at mantis@barstoolsports.com or message me on my social handles @youngmantis2. Shouout ANUS.