Ladies and gentlemen, we are truly living in the most bizarre times. 2020 has proven to be an awful year, and this weekend had more evidence to support my statement. Sunday morning, I woke up to my 25 year old degenerate, happy hour loving, green friendly, roommate talking to his parents on the speakers. He's a really nice guy and I truly like him to death, we just have different hobbies.

Back to Sunday morning. I woke up around 10 AM as my ears were no match against the thin walls and my roommate's loud ass. As my brain began to turn on for the day, I was hit with this quote from him. "Listen Mom and Dad, you can't tell me what to do, because she is moving in with me on May 11th, and she's bringing both of her dogs." I opened my eyes, did that Undertaker move, and yelled, "WHAT?" Kinda like this.

If you thought the main purpose of this video was to give you a visual idea of the moment, you are wrong. I just wanted to show off my beard. Anyways, back to the story.

After getting my abdominal crunch in, I walked to the living room, turned on the PS4, and played some COD with my friends as I waited to confront my roommate. He came out and we greeted each other like everything was fine. After he finished making some food, I put my headphones down and began the talk.

Me: "Hey man, did I hear that your girlfriend is coming to New York City sometime soon?"

Roommate: "Oh, yeah man. I've been meaning to tell you about this"

While I stood there with a blank stare, this was going through my mind.

Again, this was about my beard. I think this lighting looks better. Anyways, back to the story!

This wasn't in the lease agreement!? He tells me how he and his girlfriend from TEXAS have been talking about this for a while now and thought that moving into a 2 bedroom, 2 bathroom apartment with 2 dogs would be the only way to strengthen their love?! Who the hell does this?! A house would be more suitable for this situation, not a small ass apartment in New Jersey!

Roommate: "Honestly man, if you don't want her moving in, I can just tell her".

Me: "I feel like I have no say in this considering this has been blueprinted for months."

I told him let me get back to taking people's lives in COD and give me a couple of days to think about not only this decision, but life in general. My friend in the party chat heard the whole conversation because I purposely left my mic on and he was laughing in the most supportive way. Not only was he showing support, but so were my Snapchat friends. 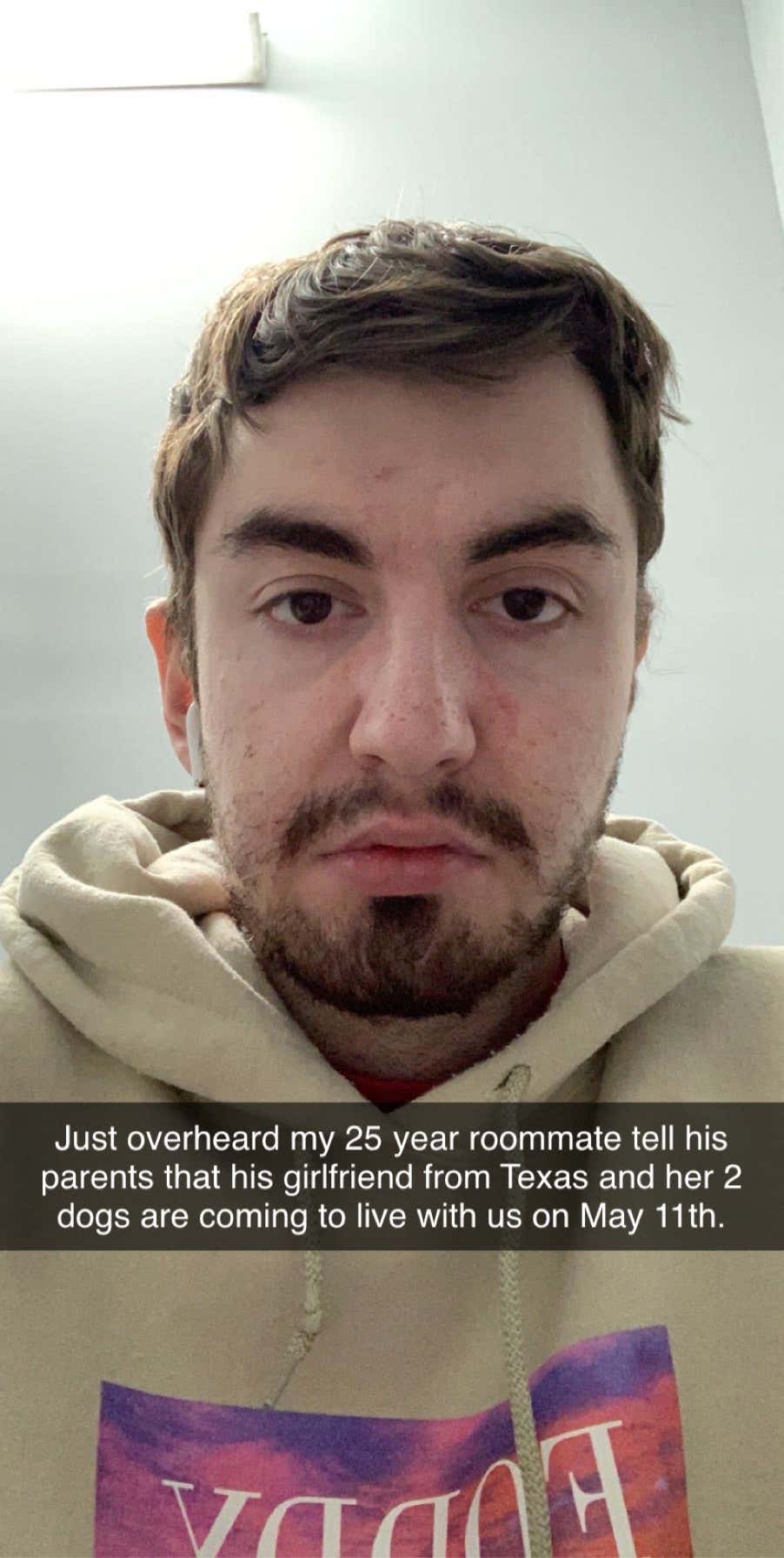 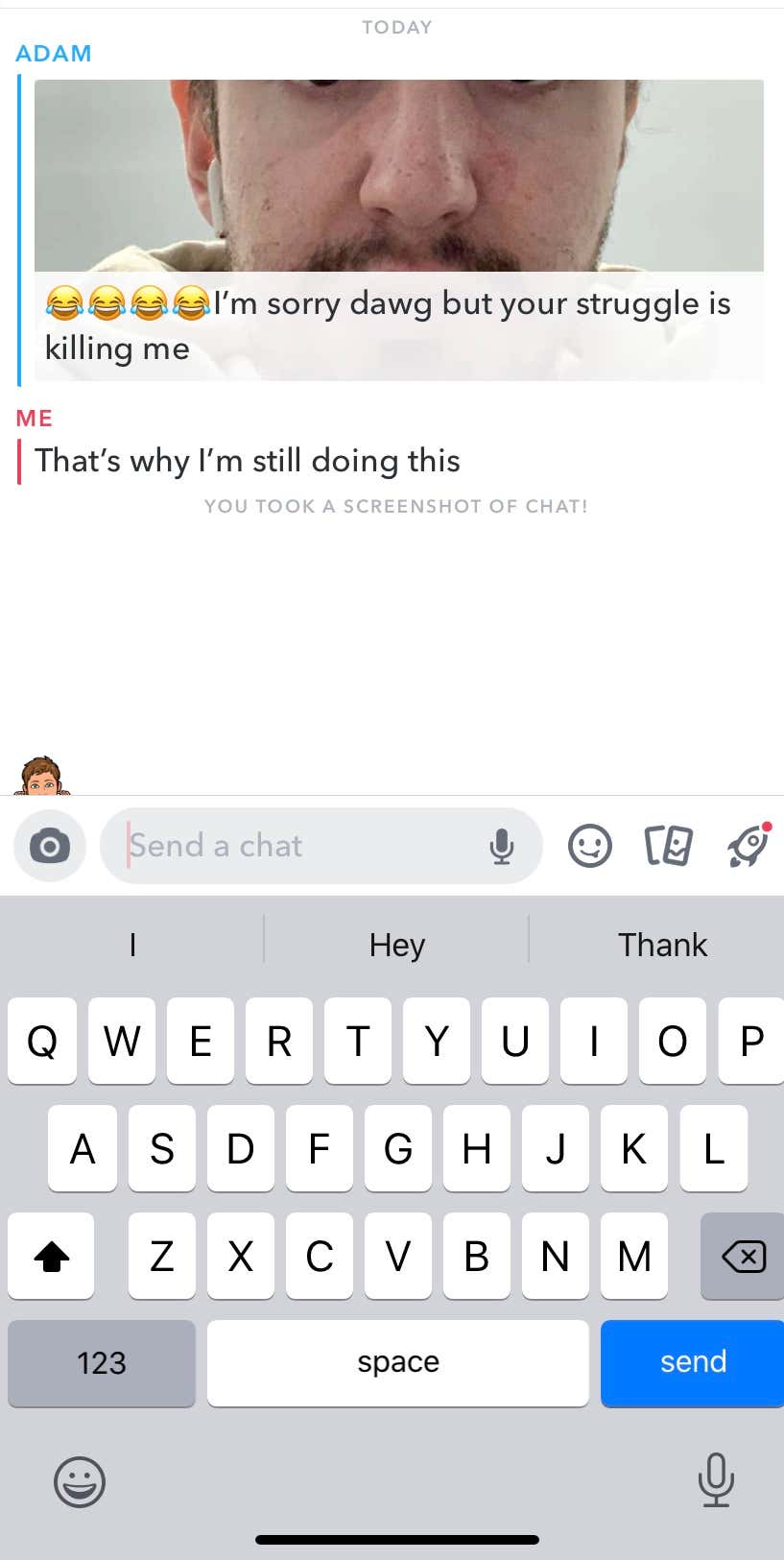 Anyways, after talking to my friends and Mom, we narrowed down on all of the pros and cons of this potential situation. Spoiler alert! There are more cons than pros.

1. I might accidentally see his girlfriend walk around naked.

2. I can use one of her dogs as an advantage to my Tinder game.

1. I will be living with a roommate, his girlfriend, and 2 dogs in a 2 bedroom, 2 bathroom apartment.

2. Adding on to #1, this will be during QUARANTINE.

4. Their dogs will probably wake me up.

6. I might go for my last swim in the Hudson river by July.

The only thing keeping me positive on this is the lowering my rent part. I'm not saying how much I make, but if my rent were to get cut down, I may be as rich as Big Cat, KFC, K Marko, and Gaz. On Monday night, my roommate and I spoke again. In order for this deal to go down, he would have to accept my 3 requests.

1. Move In After Quarantine.

Me: "If this girl and her dogs are moving in, they are NOT moving in until Quarantine is over."

Holy shit!!! Ya think?? I can't believe they thought moving in a couple of weeks was a good idea to begin with! Turn on the fucking tv love birds! Who the fuck wants to move to Ground Zero in the middle of this crisis?? Do you see Joey Mulinaro moving out of Indy to NYC anytime soon?? Sorry, I had to get that off my chest.

Me: "If she moves in here, we are dropping my lease rate lower than Addison Rae does on Tik Tok. She's paying a third of rent, and there will be a price per pet.

Roommate: "Yeah, that is fair."

Yeah, no shit it's fair.

3. Since this whole heist was planned out without asking me, I'm going to write this blog and do a weekly vlog series as soon as she moves in to show how traumatizing, funny, and authentic my life is.

I can't believe this might be happening, but at the same time, I should've seen it coming. My roommate and I get along fine. It's just the degenerate, happy hour loving, green friendly, and bringing his girlfriend and 2 dogs from Texas to live with us without saying a word part that's annoying.

I waited until now to post this because believe it or not, my roommate's girlfriend just walked into our apartment a couple of hours ago and is chilling with us for the week. You read that right. The good news is she's very sweet! The bad news is my deformed brain made me shake her hand as I introduced myself and forgot we are in New York, aka, Ground 0. I haven't blacked out from interacting with a woman since Lisa Ann kissed me a few months ago.

Until the lady and 2 dogs move in, I'm going to be counting my last few sheep in my dreams. As of now, I'm packing my bags and getting ready to go home to the Barstool office. Godspeed everyone.