On April 29th, I did a complete breakdown of Emily Zek's throwing motion. I'm not sure if she had the time to review my notes, but she has continued on her journey of learning how to throw a football.

Zeck is now through 3 weeks since she was roasted by the internet after posting a video of her throwing a football.

That being said, the arm needs to follow all the way through to the opposite hip. This is what she should work on in week 3.

We can see this improvement IMMEDIATELY on her first throw: 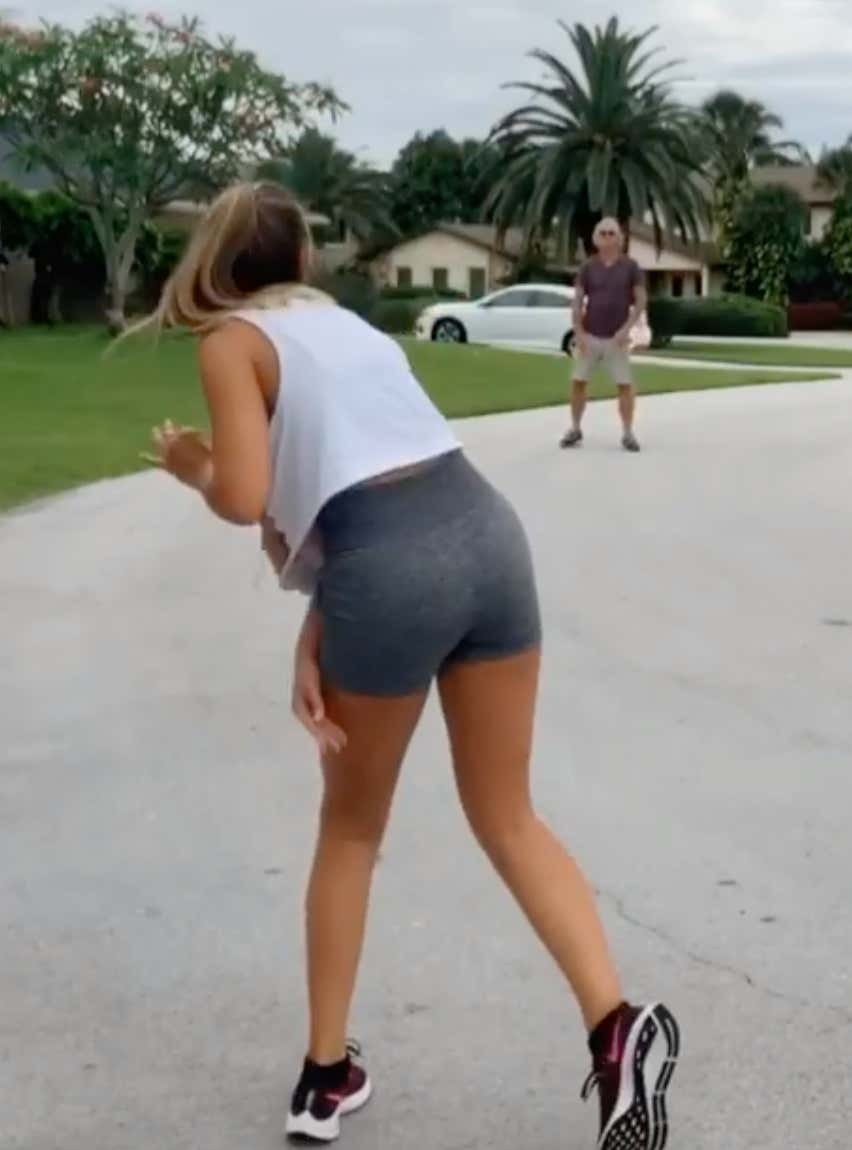 Look at that throwing hand on the opposite hip! Beautiful!

On a down note, Emily's upper half is still extending too forward as she releases the ball. I noted this in my April 29th blog:

One other thing I've noticed from Emily, she sort of falls over wit her upper half after throwing the ball.

You can see in the picture above that her upper half is ahead of her center of gravity. If you were to push her in the back from behind, she would fall forward. Compare this to Drew Brees, who is firmly over his center of gravity after releasing the ball: 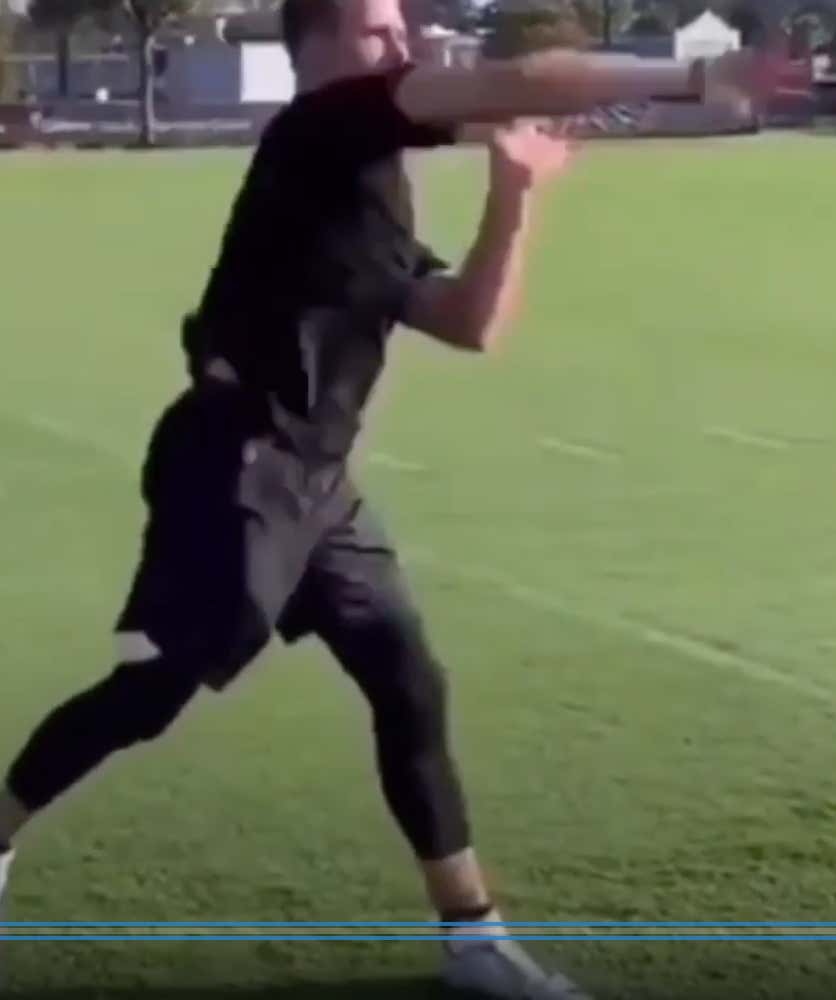 If you pushed Drew, he would not stumble. He would stand strong.

Emily, also, has a tendency to drift to the left side of her body when she throws: 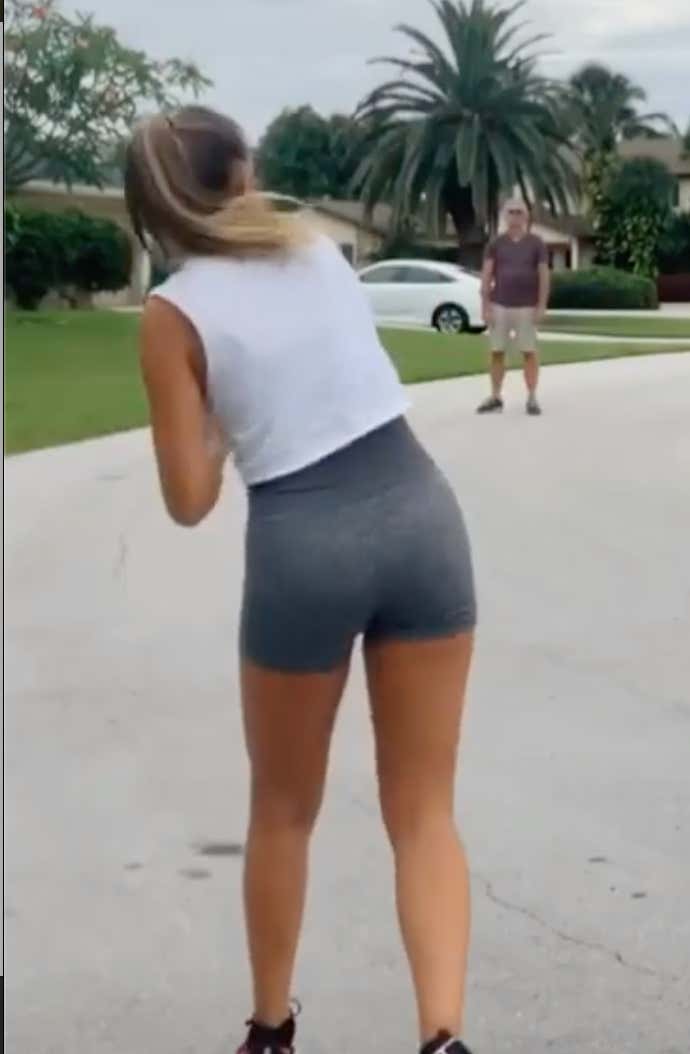 I believe this has to do with her starting position. Take a look at her shoulders here and note where they are pointing. 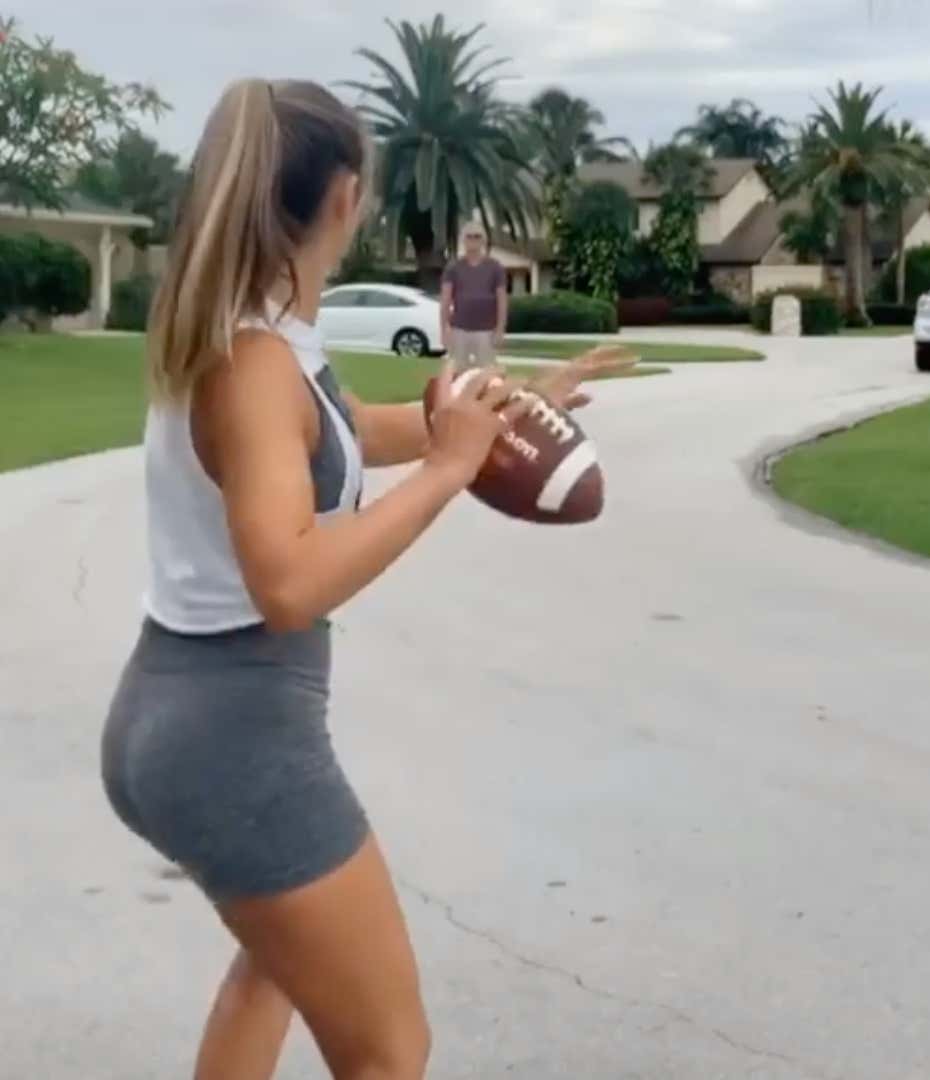 About 5 yards to the left. We want those shoulders to be even with the intended target.

Emily is pointing RIGHT at the target with her feet….We want that foot more to be at a 45 degree angle at the point of release

This is still an issue: 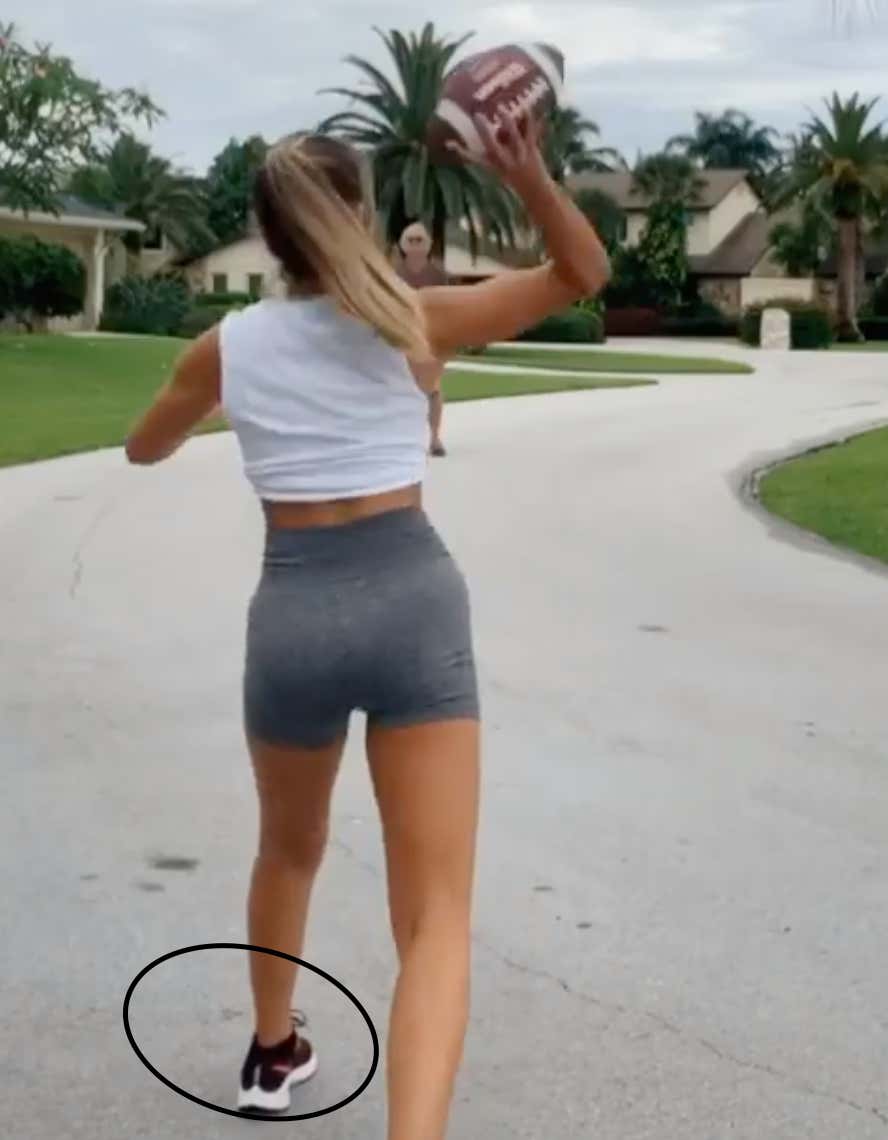 The great QBs throw with their foot a little bit more closed off, to encourage more torque in the hips. Take a look at Brady: 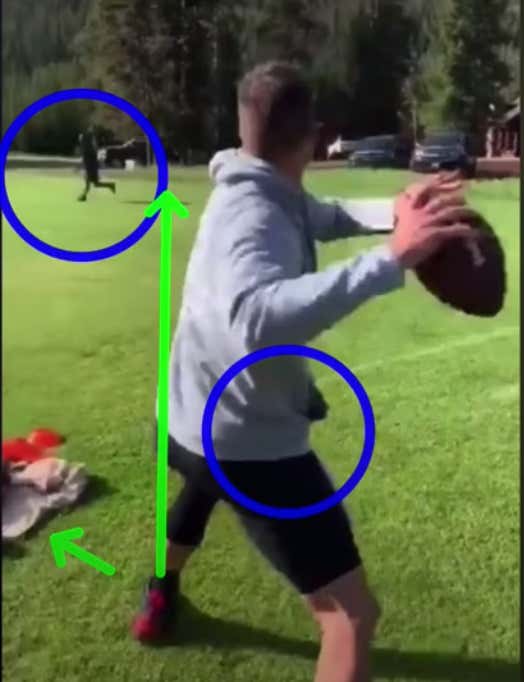 Another thing to note for Emily is how Brady/other NFL QBs have their lead foot land pretty much evenly. Here we can see Brady's foot right as it touches the ground: 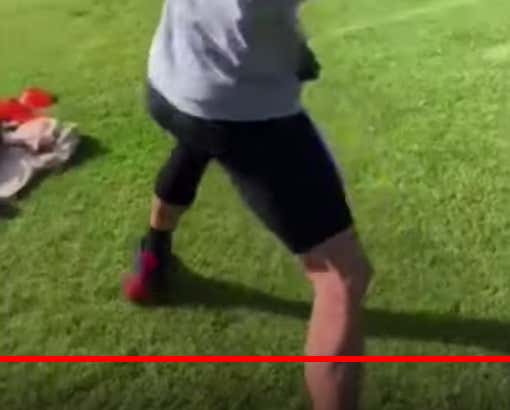 Emily has a tendency to have her lead foot land with her heel first: 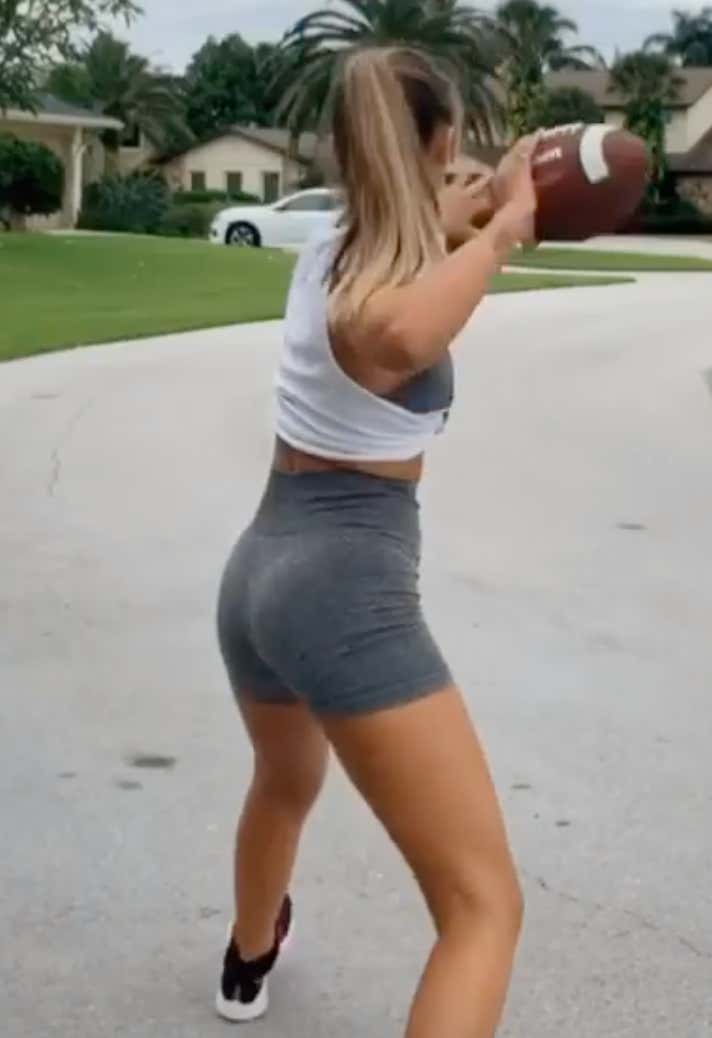 Overall though Emily has made massive improvements over a short period of time. The ball comes out her hand with some zip and a spiral. It's honestly better than most males throw a football. She was much more athletic than mechanical this week. If she continues on this path, I could see her as a starting QB in a women's football league before she knows it.