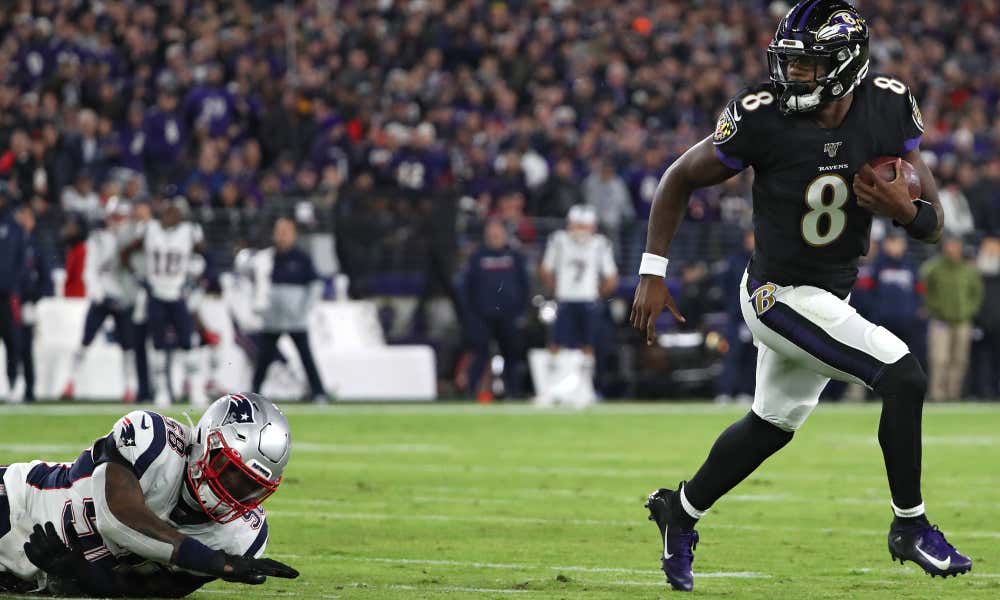 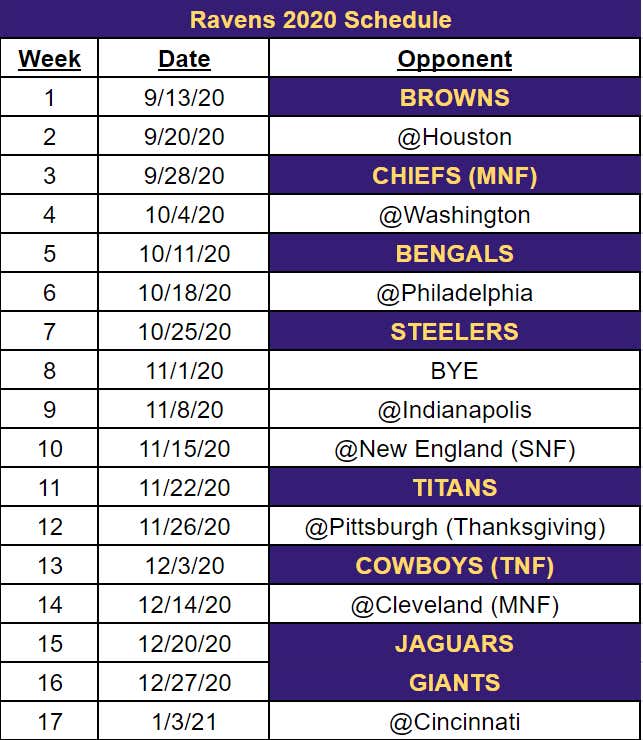 There it is. There's your 2020 Ravens schedule. Just like last year, I dug deep, cross-referenced some reliable leaks, confirmed with some #sources, and was able to put this together for the good folks of Baltimore. That's the table right there, so to speak.

The Ravens are obviously coming off an exciting 14-2 season that would be difficult to repeat for any team. Luckily for them, they have a pretty fortunate rotation in the scheduling system. The NFC East is the most inconsistent and dysfunctional division in football, with no team repeating as division champ since 2004. The AFC South has been a pit of despair since the Peyton Manning days. And even one of the Ravens' two fellow AFC division champion opponents has taken it on the chin this offseason. Hint: it's not the Chiefs.

Usually when I write this blog, it's a road map to how the team can grind out a 10-6 or 11-5 type of season that might win them the AFC North. This year is different because the team is drastically different - they're really fucking good. It's natural for regression to occur after a campaign like 2019, but this schedule makes me believe they just might repeat that 14-2 season. Or dare I say, even improve on it. I can't believe I'm saying that but it's the truth. Other thoughts on what should be another fun season:

- Everyone wants to see the Lamar show and by god is America gonna see it. 5 primetime games, including a pretty ridiculous 5-week stretch where they play 4 of em. That Chiefs game in Week 3 is the game of the year. Lamar vs Mahomes is the new Brady vs Manning and will be appointment television for many years to come. These two teams are seemingly miles ahead of the pack in the AFC, so this just may determine the #1 seed. I can't express how important that is given that this is the first season that there will only be ONE playoff bye in each conference. Getcha popcorn ready.

- Thanksgiving in Pittsburgh. What a treat. What's a little bit concerning is that this will come off a short week where the Ravens will surely be doing their best to stick it to the Derrick Henry and the Titans. They'll be playing two of their most physical football games 4 days apart, which is obviously less than ideal. This is the type of team where it feels like only an onslaught of injuries can fully derail the season and this is a high area of risk in the schedule. Not to mention these are two of the better teams they'll face all year and all bets are off against Pittsburgh. With that said, the Steelers have to play on a short week too, although we don't know yet who their Week 11 opponent is. If it's a bye, we riot.

- Last year the Ravens were the first team in the 16 game NFL era to have a perfectly alternating home/away schedule. It helps a lot for guys to get into a routine and never have to get on a plane in consecutive weeks. They came pretty damn close to repeating that this year. Better yet, the furthest they have to travel is Houston, only one time zone away, and have road games in nearby Raljon, MD and Philly. Have to love that.

- October 4th in DC. Day after the proposed new Preakness date in Baltimore. Could be a deadly weekend in the DMV.

- Back to back Thursdays is an odd quirk, but it's not unprecedented. The Cowboys actually did it last year, and will be doing it again this year so that makes for an even playing field. That should be another one of the more competitive games of the year and test the Ravens' run defense in a December environment.

- Nice little bonus of having to deal with the Thursdays is having the extra days to prepare for that MNF matchup with the Browns. I actually think they're the biggest threat to the Ravens in the AFC North. They have the roster to be a wild-card team, they just can't seem to put it together. Maybe they will, maybe they won't. But I love the idea of getting them at home in Week 1 and really squashing their spirit.

- NFL bye weeks range from Week 4 to Week 12. Falling right in the middle there at Week 8 is exactly what you want to see. The schedule is pretty evenly spread in terms of difficulty, so there's some good balance there too. Players should be catch their breath at a nice midpoint of the season and come back firing for the only back-to-back road trip of the season.

- Can't help but notice how cushy that home stretch is. Jaguars, Giants, Bengals should be an absolute cake walk to finish the season. Hopefully we'll have what we need wrapped up by then and catch that necessary rest over the holidays. If we have to sweat through any of those games with a lot on the line, we've got a problem.

There ya have it. I usually wrap this blog up by putting these games into buckets and projecting what their record might be, but this franchise is in a different place than years' past. I know that's arrogant but I don't care. There are certainly teams capable of giving the Ravens trouble, especially on the road, but ultimately they should beat every single one of these teams except one. The Chiefs. They're kings of the mountain for a reason. They're better than us. Beating them in Week 3 doesn't really change that, but it holds a huge amount of weight in taking the crown in the postseason. That's the focus. Repeat last year's regular season. Change the postseason.

Let's have a season yall.