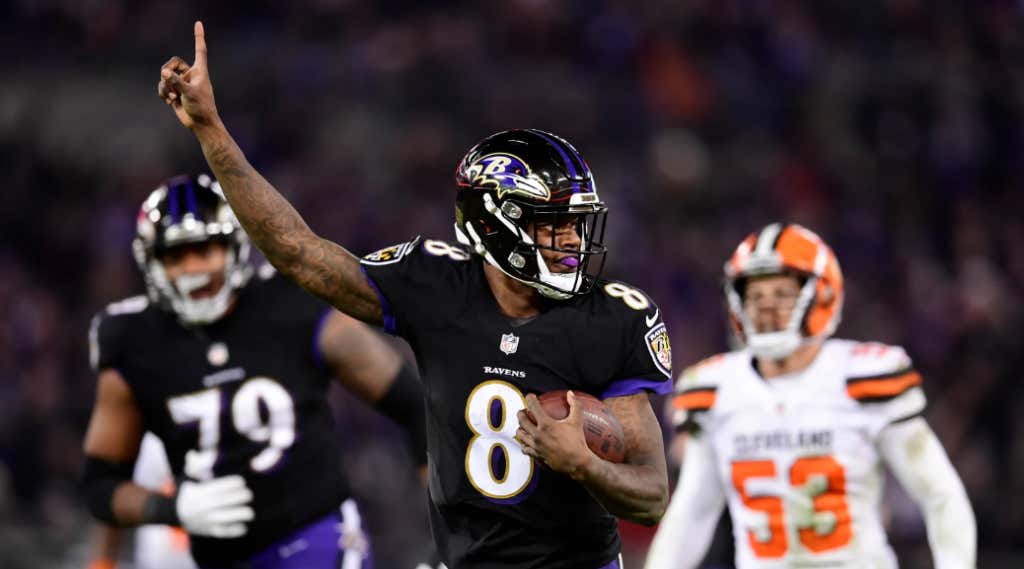 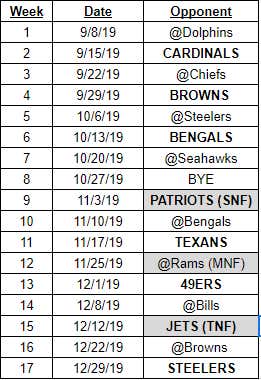 There ya have it folks. I’ve scoured every corner of the internet, cross-referenced every verified schedule leak, talked with some people in the know, and this right here is it. Save for maybe an extra primetime gametime or one of those funky late season Saturday games that I may not have correct, this right here is your road map to an AFC North title defense, and hopefully more.

Schedule release day is one of the more ridiculous NFL days of the year. The NFL has such a stranglehold on America that we crave every little taste we can possibly get of Sundays in the fall. Free agency news, draft coverage, schedule releases, the whole shebang… we’re all slaves to it. Myself included as much as anyone. Which is why Goodell does this whole production where he announces the announcement of the schedule on Monday and then makes us wait until 8 pm on some random April night where we all know we have nothing better to do than fiend for a taste of football. So I made it a mission today to get this information for all of you as soon as I possibly could, and here it is a couple hours early. You’re welcome.

Anyways, there’s a lot to like about the schedule here. We’ve known who the opponents were gonna be for months, it was just a matter of when and the order in which these games would be happening. From that standpoint, there’s really not a lot to hate about the slate the Ravens have been presented. Some initial thoughts:

– The first thing that really jumps off the page at me is how the schedule literally alternates road and home the entire way. I can’t say I’ve ever seen that before, and I can’t really see it as anything but a benefit. Sure, it all evens out with 8 road and 8 home games in the end, but I think the downside of playing consecutive road games outweighs the benefit of playing consecutive home games. They don’t have to deal with any of that this year. This allows the players to get in a rhythm from start to finish. Every time they get home from a road trip, they know it’ll be 10+ days before they need to pack their bags again. There’s comfort in that.

– The next thing you really look for, and definitely the first thing the players look for, is when the bye week is. Bye weeks can range from Week 4 to Week 12, and the Ravens landed on Week 8. I’d say overall this is a win. Training camp, 4 preseason games, and 7 regular season games on one side of the bye…. and 9 regular season and hopefully 3 postseason games on the other side. A real nice distribution to say the least. Better yet, it comes right after one of their longest road trips to Seattle, and comes before one of their biggest home games against the Pats. There’s nothing worse than a bye week that’s too early in the year, so avoiding that is a big win.

– Divisional games. We’ve got a title to defend, and most of America has already given it to…. *Boomer voice* CLEVELAND?!? Yeah, so they’ve gotten better this offseason. So what. Until they come to Baltimore and take it from us, they haven’t accomplished shit. They’ll have their opportunity to send a message in Week 4, and we’ll be ready for them. That game kicks off 3 straight weeks against divisional foes, 2 at home and 1 on the road. If there’s a time in the regular season where we want to peak both health and performance-wise, it just might be this stretch. Lose 2 out of 3 and it’s gonna be a real tough climb the rest of the way. 2-1 and we should be in control. 3-0 and we’re golden.

The @Browns/vs Steelers finish should be epic. I understand the league doesn’t want to stack all their best primetime games in the same weeks every year, but I’ve always thought it’d be incredible if they could make Weeks 1-3 and Weeks 15-17 strictly divisional games across the board. Almost like how college sports have nonconference seasons and conference seasons. The drama would be palpable. Maybe I’m on to something and maybe not, but it’s hard to imagine at least 2 if not all 3 of the Ravens/Steelers/Browns scratching and clawing for playoff position in those final two weeks. Either or both games could get flexed for SNF. So fired up for that.

– Other primetime games… it feels like the Pats never EVER have to come to Baltimore, and you’d be mostly right. 7 of the last 9 meetings between these two have been in New England, with the last Baltimore game being in 2013. I’d love to bitch and moan about that, but it’s just the way the cookie crumbles when one team takes plays in a trashbag division and takes care of their playoff seeding and goes on a run of unparalleled dominance and fuck you Tom Brady. But anyway. Should be good to see those guys in our building for once.

The Rams game should be a doozy too. Obviously you’ve got the Eric Weddle storyline in play, but that’s just two great football teams going head to head. Prolific offense against one of the league’s best defenses. Lamar Jackson and a strong run game against a stout defensive front. Maybe even a Super Bowl preview, who knows? You could make a case that the Chiefs game has all the same potential as this one, so if there’s one I may not be 100% accurate on whether it’s a primetime game or a day game, I’d bet on that one.

Overall, I like the way the schedule flows a lot. Should get off to a 2-0 start, probably lose at Kansas City, and then go through the AFC North gauntlet to see what you’re made of. 4-2 and you’re probably in good shape. Tough game against Seattle might mean 4-3 at the bye, and another tough game against the defending champs might have you at 4-4.

But I like the way the back of the schedule sets up. The Niners/Bills/Jets trio is a nice little run to build up some confidence coming into the AFC North home stretch. The one big swing game in the middle of the schedule (and there’s always a swing game, I viewed last year’s game at Atlanta as the swing game going in and that probably proved correct) is the home game against Houston. Good but not great team coming into our building that will be probably right there in the wild card fray come Week 17. That might be the make or break nondivisional game this season.

I joked today on twitter that Schedule Day is all about convincing yourself your team can find a way to 10-6. Some teams it takes a little more convincing than others. Some years that’s the case for the Ravens, but this isn’t one of them. The 10-6 formula in my eyes is this:

4-2 in the division (split with Steelers & Browns)

Anyways. There ya have it. A little taste of the NFL in the middle of April. Next week we get the NFL Draft. Big time week for Eric DeCosta, and I expect nothing but good things from the new bossman.