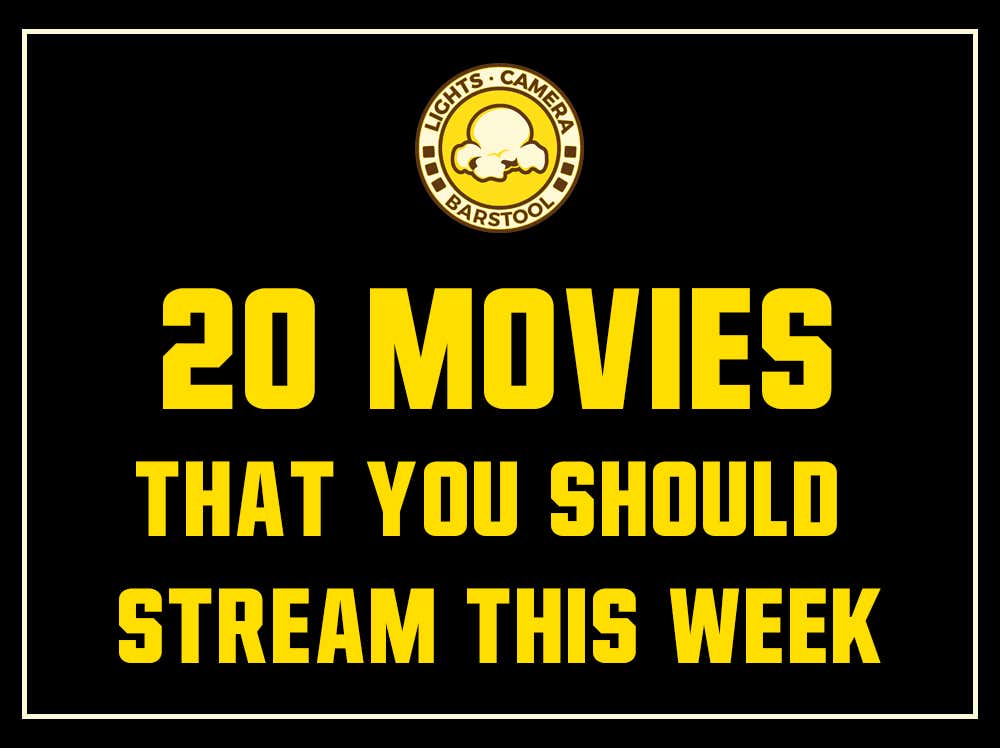 I shouldn't really have to pitch you on this, but here is my full review.

My personal second favorite Tarantino movie, Django remains one of the most entertaining movies of the 2010s. Gratuitous violence, outstanding dialogue, and a bunch of racists getting the shit murdered out of them. What more do you want?

I'm a huge fan of espionage movies and TTSS is a good one. It's a little dense and hard to follow sometimes, but it weaves a good story and has an ensemble cast that I can only describe as the British Avengers.

(Full Review Here) I don't really think this movie got a fair shake. It opens up with one of the coolest long takes in recent memory from director David Mackenzie (director of 'Hell or High Water), has 2 outstanding crazy people performances from Aaron Taylor-Johnson and Billy Howle, and has some of the best medieval fight sequences from a recent movie as well. It's also just really fucking raw which I love.

I don't need to convince you on Bridesmaids. It's one of the better comedy movies of the past decade and is must-watch for fans of the genre.

God, what a great movie. It's a quick, easy plot that is funny and thought provoking. The performances from Albert Brooks, Meryl Streep and Rip Torn (RIP) are fantastic across the board and the movie still holds up really well.

I don't think nearly enough people have seen this movie, which comes from director Denis Villeneuve (Sicario, Arrival, Blade Runner 2049) and has two of my favorite career performances from Jake G AND Hugh Jackman.

Odds are that if you are reading this, you have seen this movie. If you haven't, I now direct you to stop what you're doing and watch this movie.

Terrence Malick (Badlands, The Thin Red Line) is a bit of an acquired taste. Personally, I find his flicks sort of hypnotic, but it can come off as pretentious to others. Either way, hard to deny that Pitt is fantastic in this.

I already recommended it but I will keep doing so until as many people see it as possible. It's the only movie I gave a 100/100 since we started rating movies, and I've been singing its praises way before it took home 4 Academy Awards.

This doc still holds up and is a really creepy look into the world of Charismatic Christianity.

One of the most iconic comedies ever. Enough said.

Nazi Zombies man! This movie was a little slept on and is a very entertaining action sci-fi horror movie. I also just love Pilou Asbæk, what a great actor.

This movie only got so-so reviews, but man do I love it. I remember I would stop whatever I was doing to watch it whenever it came on FX. It's classic, old-school suspense and Kiefer Sutherland's voice makes everything better.

It's a little strange to watch in retrospect with everything that's going on, but it's still a fantastic movie that holds up very well.

This is one of the many entries in the old man-turned vigilante movies that I can't get tired of for some reason. Who doesn't love Michael Caine killing gangsters?

This movie is raw, gross, and still incredibly compelling. It also has one of the more "oh shit" endings I can remember watching when I was younger.

There is not a single Neill Blomkamp that isn't cool at the very least. This is my favorite work of his and it has great sci-fi design along with a compelling story. Also just some really fucking cool guns,

Sometimes a slice of life movie just jumps out and makes a real lasting impression on you, and that's 'Lady Bird' for me. Am I a teen girl growing up in early 2000s Sacramento? No, in fact I'm pretty far off from that demo. But this movie make you feel and empathize with said character.