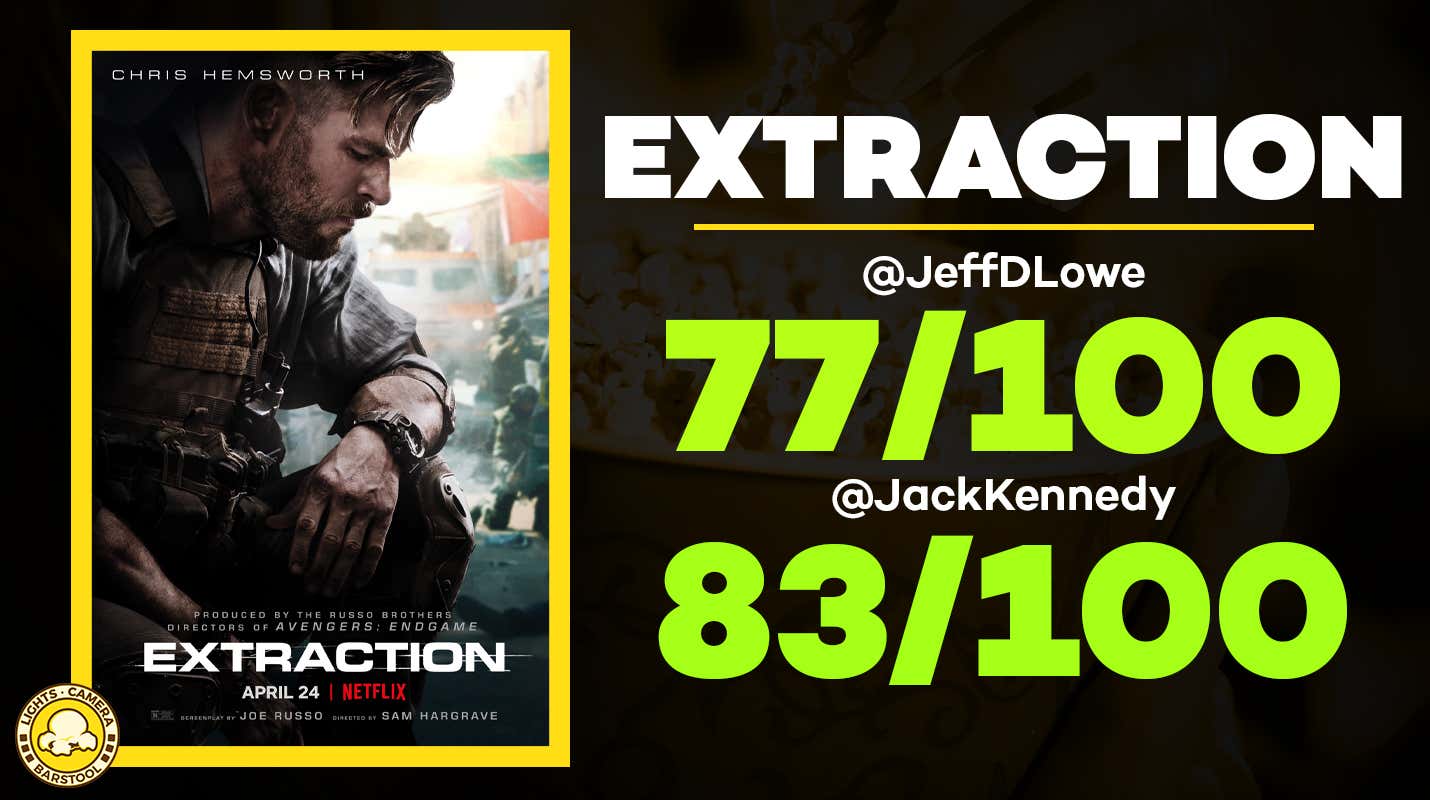 Chris Hemsworth teamed up with his 'Avengers: Infinity War' and 'Endgame' directors Anthony & Joe Russo, as well as Captain America Stunt Double and 'Avengers' Second Unit Director Sam Hargrave to make an in-your-face action movie. It's out on Netflix and this is what we thought...

A black-market mercenary who has nothing to lose is hired to rescue the kidnapped son of an imprisoned international crime lord. But in the murky underworld of weapons dealers and drug traffickers, an already deadly mission approaches the impossible.

NOTE: Jeff D Lowe's review and video from our interview with the movie's director will drop tomorrow...

KenJac (83/100): I don’t know what we are calling this new era of action movies (headlined by franchises like ‘John Wick’ and ‘The Raid’) where storytelling and characterization are done through physical conflict, but ‘Extraction’ certainly fits the genre. It is a violent, gritty, and well-designed story featuring some great work from names you know, such as Chris Hemsworth and David Harbour, as well as foreign market stars.

We were lucky enough to chat with director Sam Hargrave, a stuntman with credits for stunts, coordinating, and the second unit directing in movies like ‘Avengers: Infinity War’, ‘Captain America: The Winter Soldier’ and ‘Atomic Blonde’. In our interview with him, you can tell his reverence for authenticity in action, which comes across so well in this movie. You can listen here:

Chris Hemsworth (Tyler Rake) is obviously the big name and draw for this movie, and he delivers in a great way. He is a constant presence, using his physicality and brute force in a way that is so badass and reminiscent of old-school Arnie without the corniness or bad fight choreography. Hindi film star Randeep Hooda (Saju) plays Hemsworth’s adversary, and I love how they crafted his fight choreography because he is able to match Hemsworth using more finesse instead of trying to have him match him in strength. David Harbour also makes an appearance to help add some characterization to Rake, and young star Rudhraksh Jaiswal also gives a great performance considering both his age and the seriousness of the role. I also want to shout out the performance of Priyanshu Painyuli, who is an outstandingly evil bad guy.

The movie moves along fairly quickly into the action, which I appreciate. Tyler Rake is a mercenary who has gone through some shit and is taking on any suicidal mission he is offered because he doesn’t care about his own life. He is contracted to extract an Indian crime lord’s son who was kidnapped by another crime lord and is being held hostage in Bangladesh. A series of fuck ups lead to Rake being stuck in Bangladesh with literally everyone out to get him. Like I said before, the action flows seamlessly and is incredibly well shot. There is even a long-take that lasts around 20 minutes, going from building to building to car chase to fistfight to a gunfight. Really fucking cool stuff.

The only knock I have on it is that some of the plot points feel a bit unoriginal and the non-action moments a little forced. Honestly, though, I don’t feel like that’s why you go to watch the movie. The best cosign I can give this movie is that Sam Hargrave is a friend and colleague of Chad Stahelski, director of the John Wick movies, and their styles are very similar. I think this is my favorite movie so far to drop during the quarantine.

----
This is movie is not yet Officially Buttered but it is a fucking great time, especially while we sit here with so few new movies to pick from. You can hear our full review of the movie on this week's upcoming Lights Camera Barstool. Make sure to rate all 2020 and 2019 movies on a scale of 0-100 in the links below…