Sex, ladies and gentlemen. That was pure sex. And I'm not talking about drunk, sloppy sex after a night out at the bar with someone you just met a few hours ago. I'm talking about making sweet, sweet love.

This is Bradley Robinson. You might remember him from the blind brisket trim video a few weeks ago. When he's not slinging brisket at Leroy and Lewis, he's building his Chuds BBQ Pits. And to get from here... 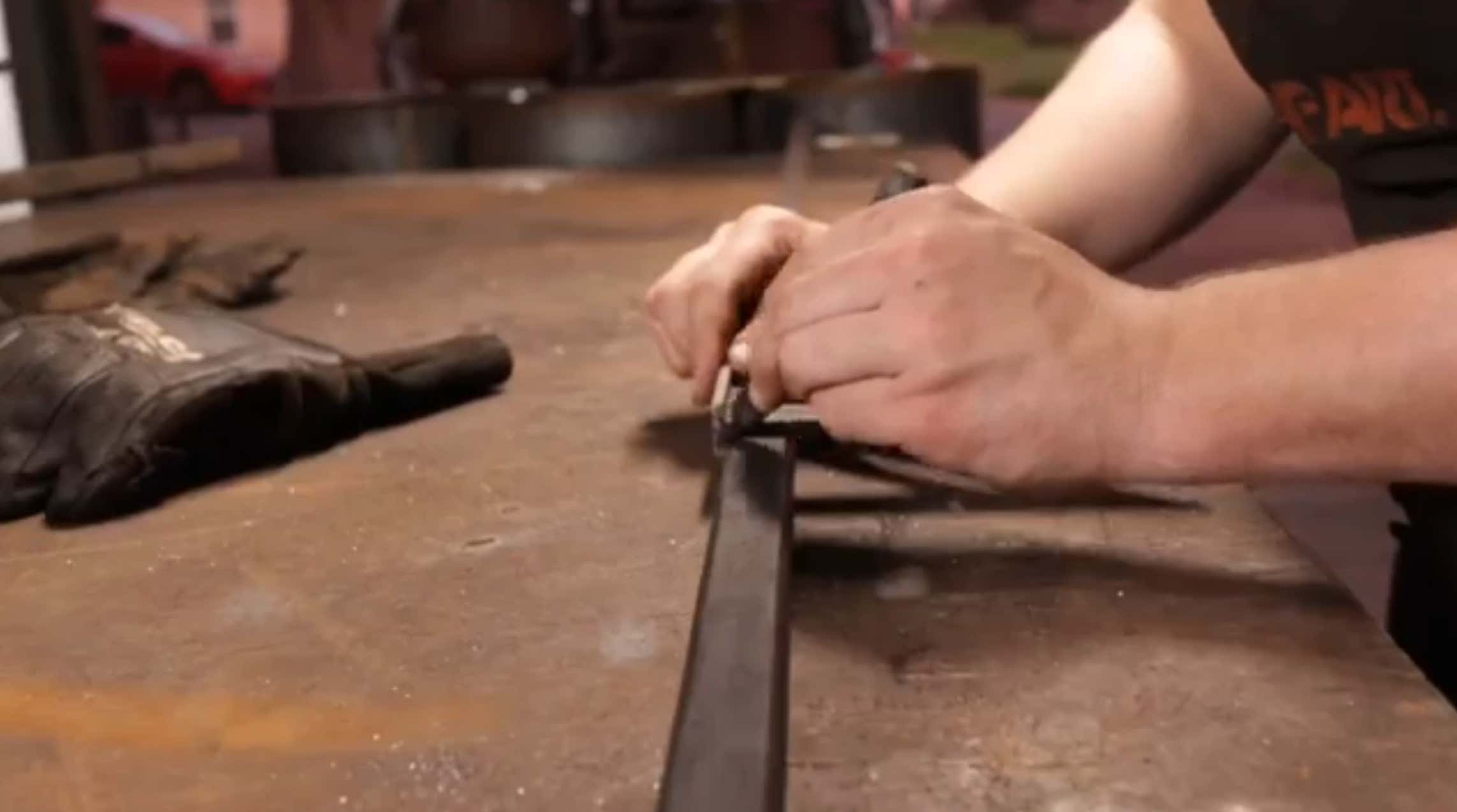 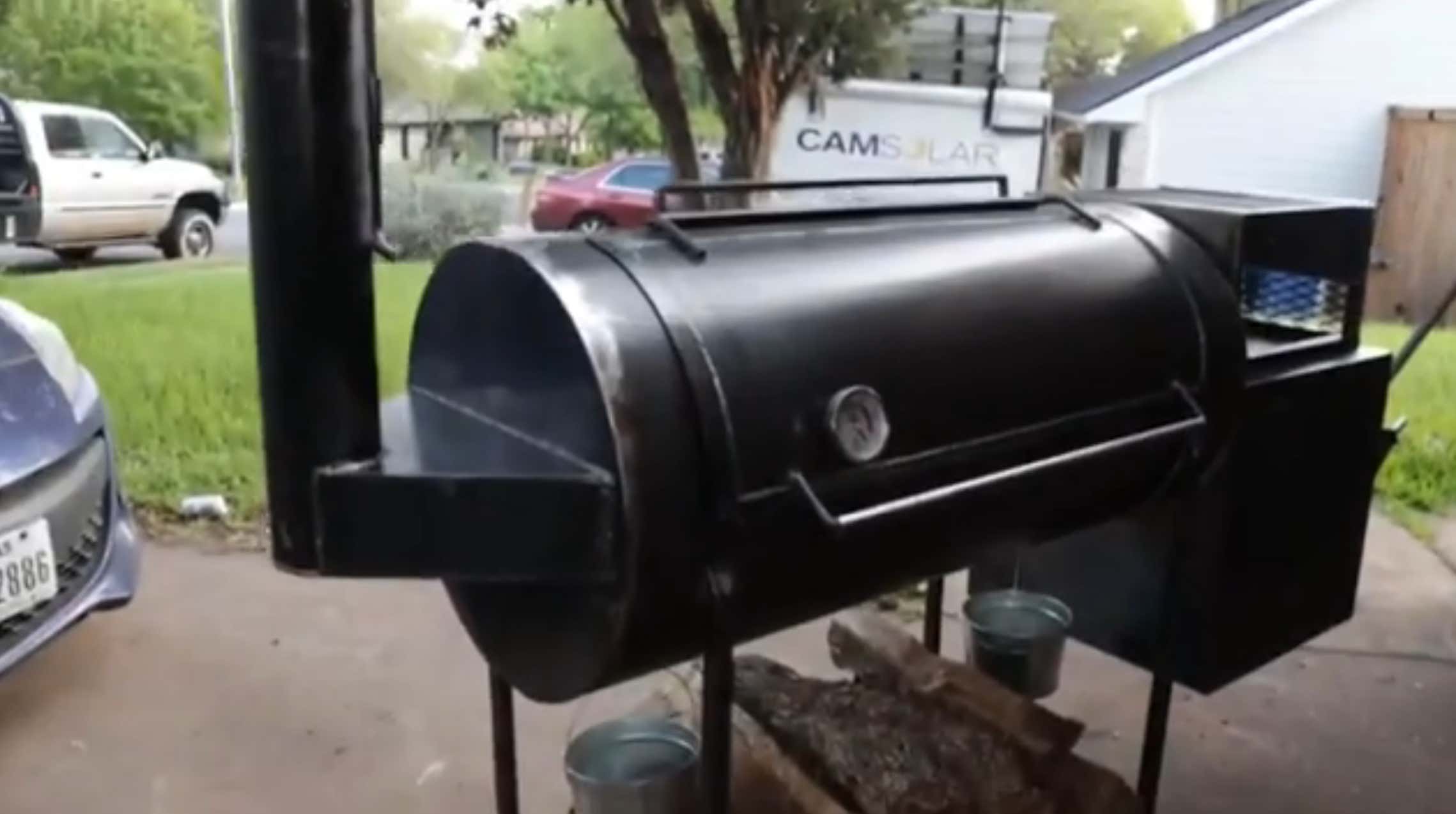 ...was a magical journey. And a journey which makes people like myself particularly feel like an absolute piece of shit for not even knowing how to hold a welding torch. I'm also pretty dog shit with any sort of power tool in general. But my lack of any sort of handyman skills doesn't take away from the fact that this was like watching a bearded Picasso. Even though I don't really like Picasso's shit but I feel like he's always just the defacto name to throw out there.

Since we're talking about smokers anyway, I figure maybe there are some of you out there who are interested in a little lesson in Barbecue 101 on the different types of smokers. And by "some of you" I realistically mean like 4 or 5. But that's fine because it's quarantine and we've got nothing but time and it's not like I'm forcing the rest of you who don't care to continue reading.

Now there are a bunch of different types of smokers that range from a literal brick pit in the ground to electric smokers. We're not going to talk about all of them here but we can at least talk about some of the more popular styles of backyard smokers. We'll break them up into 3 categories based on what type of fuel you use for the fire. Which are wood, charcoal and pellets.

So the smoker you just watched get built is an offset stick burner. You already got a demonstration on how these work but you've got the fire box on one side of the pit. You throw some wood in there and the smoke then travels up the fire box, the smoke then travels across the actual cooking chamber of the pit horizontally, and then the smoke stack is on the opposite side of the pit to pull all that airflow through. Personally I think this is the best way to do barbecue but it also takes the most amount of work to maintain the fire because you constantly have to keep feeding it new logs. If you're smoking brisket for 12-13 hours, then you're working on that fire for 12-13 hours.

There's also another type of offset stick burner which would be a reverse flow, like this Lang. 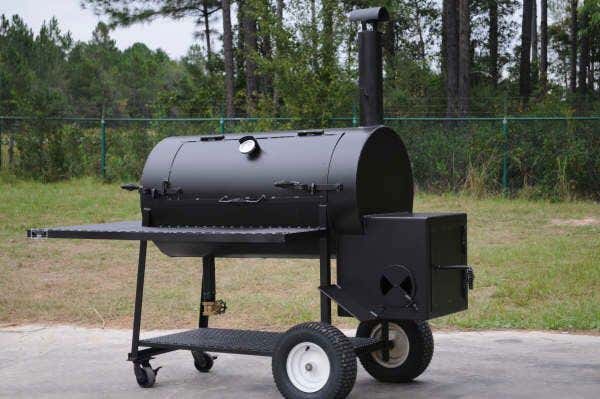 Same thing here where you have an offset firebox that runs on wood. But the smoke stack on these are on the same side of the cooking chamber as the firebox. That's because there's a little plate that runs under the cooking chamber which takes the smoke up from the firebox, under the meat, and then comes back around the other way through the stack. Some people say that's for keeping the temperatures more even across the grates. Some people say that the fat that renders off the meat then sizzles on the plate that runs underneath to add more flavor. But at the end of the day, it's still wood meat and fire.

There are a few different types of charcoal smokers which all have their own pros and cons, but at the end of the day they all work under the same principle. So whether it's a barrel smoker... 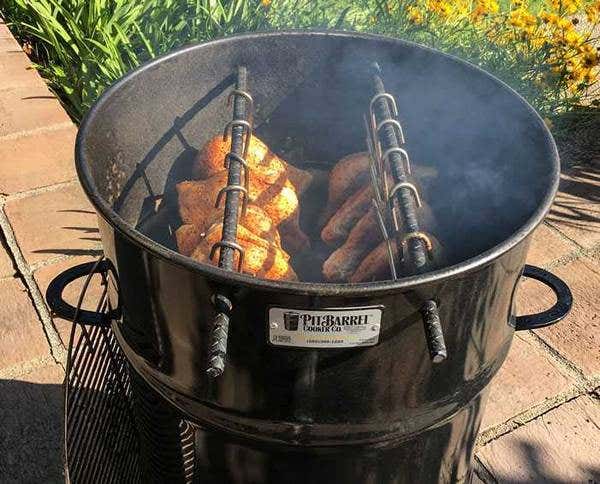 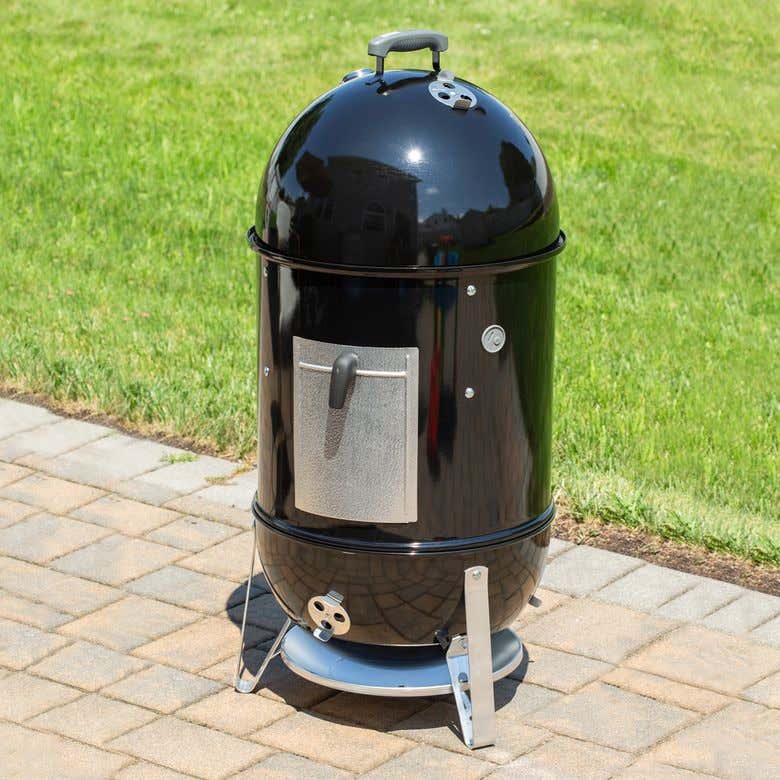 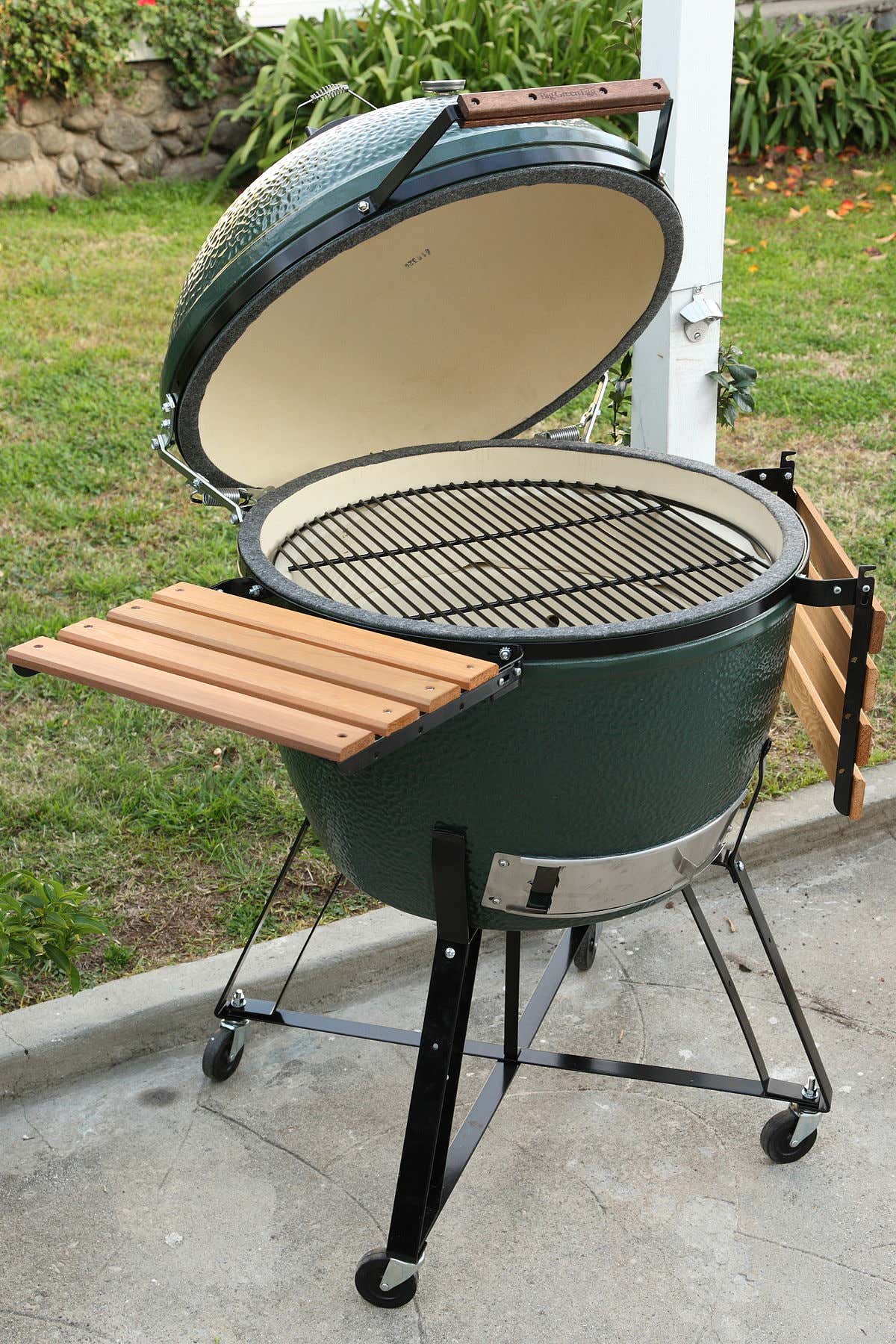 ...the whole idea is that you build a fire with charcoal at the bottom of the smoker which is far enough from the meat that you're not just grilling it, and then that smoke travels up and all around the smoker. You can throw some chunks of wood in there to get that flavor but the fire mostly runs on charcoal. You have to use the vents to adjust the temperature you're smoking at but since you're using charcoal and the material these smokers are used with are so good for retaining heat, it's not nearly as much work as the stick burners to maintain your fire. With something like a Big Green Egg, as soon as you get the temperature you want to cook at locked in, you can feel free to step away from the smoker for a couple of hours without having to worry about the fire either completely dying off or erupting. So you still have to put in the work to get to that temperature, but you're not babysitting a brisket for half of your day. The trade off there is that you're not getting the same smoke out of charcoal that you would with wood. 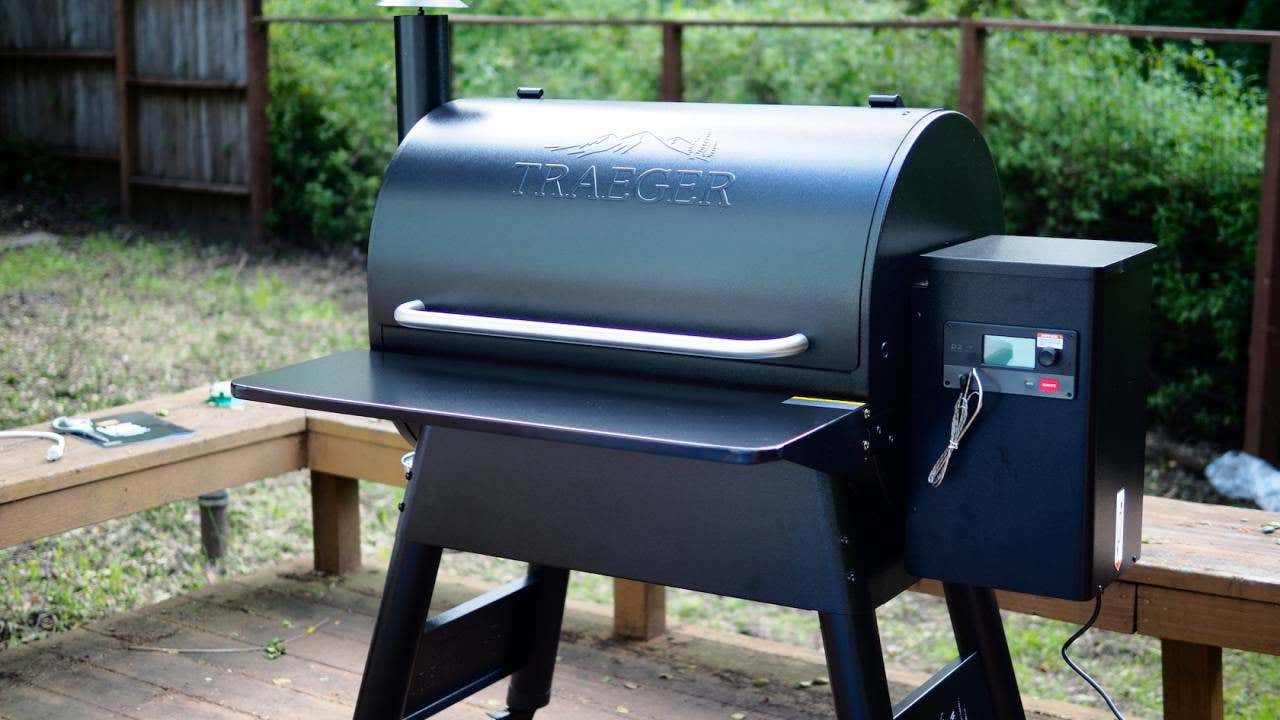 The biggest difference here is that you need an outlet for a pellet smoker. And that's because this takes all the fire building out for you and does it automatically. So you've got the hopper on one side of the smoker and you load that up with wood pellets. Then you can plug in what temperature you want to be cooking at and the smoker will automatically start feeding those pellets into a fire to get to that temperature for you. There are pros and cons to that. The pro is that if you're someone who loves to eat barbecue but you also want to go to the beach for 6 hours while your ribs cook, you can set it and forget it. By the time you get back, they're ready to eat. But depending on how involved you want to be when cooking, that could also be a con. So they're a great type of smoker for someone having the boys over in the backyard for some beers. But if you ever go into a BBQ restaurant and see that they're using a pellet smoker, that's probably the cue to leave. But again, perfect for the backyard. We don't need to start a war here.

And that was today's lesson in Barbecue 101. See ya next time.