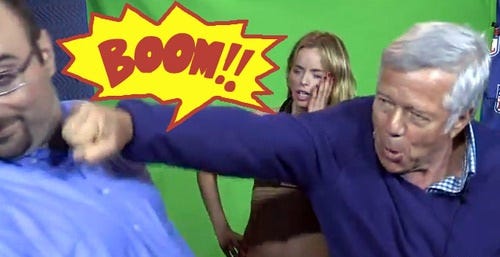 Yesterday I mentioned how Palm Beach prosecutors offered Mr. Kraft a deal where they’ll drop all charges against him in The Tug Rule case, and all he’ll have to do is plead guilty, attend classes on prostitution, pay fines, do community service and get tested for STDs.

And as tempting as it sounds to admit you paid for a handjob, pass Prostitution 101, whip out your checkbook to the court, wear an orange vest while picking up highway trash, and be the only 77-year-old billionaire in the world having to prove you don’t have chlamydia, I suggested the only reason they’d offer such a sweetheart deal is they know their case is unprosecutable and are desperate for something, anything, that will make so they can claim victory. Because again, in case you’ve forgotten, this is a misdemeanor offense that usually doesn’t even require you to show up to court. Anything more than treating this like a violation caught on a traffic camera deserves to be fought.

Well according to ESPN’s reporting, Mr. Kraft’s legal team agrees with me. On declaring this “deal” Dead On Arrival and on the fact this human trafficking talk is pure, Grade A horseshit:

“A non-starter” is exactly what they should call that ridiculous offer. These state attorneys spent six months diverting police resources away from real crimes to investigate grown men paying for Two Asian Thumbs Up from consenting grown women behind closed doors in exchange for tips until they caught somebody famous. Then they immediately held a press conference and grandstanded about non-existent trafficking in order to justify singling out this one celebrity for humiliation. Now they’re asking him to help them out with a plea bargain. And his lawyers, rightfully, are telling them to go piss up a rope. Good for them.

And make no mistake what the stakes are in this one. Because now a group is pressuring Roger Goodell to “banish” the best owner in his league. For life. Over a handookie from a 58-year old American citizen in her own shop. And we’ve all witnessed how little Ginger Satan values real justice when faced with outside pressure. So you fight this thing to the last man. To the death. Fight like the future of a billion dollar football franchise depends on it. Because it does.