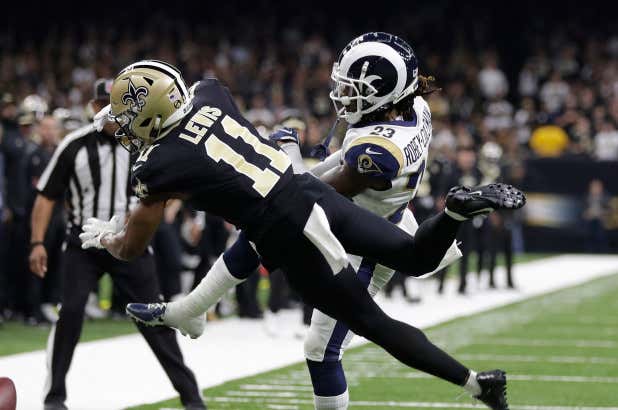 Thoughts and prayers to the city of New Orleans except your too drunk to understand my thoughts and I’ve tried to pray myself out of a mess in Louisiana before but god coudnt hear me over the sound of a police horse stomping in prefect time to the tune of a Allman Brothers tribute band playing on a nearby patio.

That was a all-around exellent NFC Championship, with Sean Payton unveiling his hipster clear frame glasses because unless its ground-up rhino nose on the side of his margatia glass, they dont do anything with a horn-rim down in the big easy. The look Payton was going for looked like something a shop teacher might get as a loaner pair from Lens Crafters after your orignal pair fell off the roof of your Santa Fe as you were speeding away from your ex-wife’s karate recital. There were big turnovers, awesome defense by Aaron Donald, and Taysom Hill doing that thing you see in minor league baseball were he plays every position in a exhibiton game.

Its good to see the spirit of Gregg Williams lives on in the last two franchises he coached prior to Cleveland and Robbey-Coleman took out the head of Tommylee Lewis. But lets call it what it is- Drew Brees’ accuracy finally caught up to him and cost his team that call. Brees set a NFL record for completion percentage this year, meaning that his passes were rarely off-target enough to get referees use to seeing pass interference calls on underthrown balls against his wide receivers. So its no wonder that on the play that ended up deciding the game, the refs were flummoxed and hestated to reach for their flags.

This is where a man like Joe Flacco would of been a much better addition than a Taysom Hill. Joe Flacco gets that PI call 11 times out of 10- its his equivlant of Tom Brady running the QB sneak. Flacco can, and has, drawn that flag hundreds of times.

You will see all sorts of wild takes from people less intelligent then I am in regards to how to solve this issue Wether it’s “make Pass Interference reviewable” or “give the referees guns so people are less likeley to talk back to them.” But the blame for this call has to go on Drew Brees inabilty to accurately throw a inaccurate pass resulting in a penalty. Anything less is revisionist history. Flacco is the master of taking a little mustard off a pass when the CB is trying to catchup, putting the condom in condoment and playing it safe when the coverage is tight.

Its easy to point fingers but lets point another one at Benjamin Watson the ageless former Patriot- now Saints TE who sat out because he had a alleged minor burst of his appendix. You’ll recall Tebow played for years with an organ he didn’t use,and he made lemonade by dedicating several missions to the phillipeans to rupturing other people’s organs. You dont even need a appendix its the throw pillow of body parts simply there for apearrence and to fill up space.

The Appendix(body part) is the appendix  (book part) of organs. It just sits there covered up by a jacket and people only pay attention to it if theres something extremeley screwed up in it. The fact that Watson chose to sit out just because he was playing a few ounces lighter was Belichick at his finest- putting the former Patriot onto a NFC roster as a spy only to have the ticking time bomb Ernie Adams sewed into his belly activated at just the exact right time.

But I digress. The good news for the Saints is Flacco will be avalable this offseason and they have a chance to right the wrongs and do right by there fanbase. Joe Flacco has a particular set of skills and if your looking for a specialty QB whose proven to take their franchise to the promised land- theyd be better off putting in a former savior then a latter day saint.