The episode featured Corey Lewandowski, the former campaign manager to President Donald Trump, and David Clarke, the former sheriff of Milwaukee County. But it’ll likely be most remembered for someone not nearly as recognizable: Dan Roberts, president of a small pro-gun organization called Youth Shooters of America.

Cohen, holding a sword in the air, then instructed Roberts to “identify the target” and “attack.”

Roberts put the strap-on in his mouth, bit down and yelled garbled orders to the attacker as well as the supposed other terrorists surrounding him.

Kudos to Dan Roberts for immediately resigning after this episode aired. I mean what could he have possibly said? That he thought he was preventing a terror attack with a blow job? I mean, in the right situation it could work, but not mid-beheading. All that would do is expedite the process depending on what the guy’s into. This whole show blows my mind. I guess I just genuinely don’t understand how people can be so fucking stupid the second someone puts a camera in their face. Like, was he too scared to say no? Did he not realize that he was sucking a plastic dick on camera? It seems pretty obvious, but you never know. Poor guy. 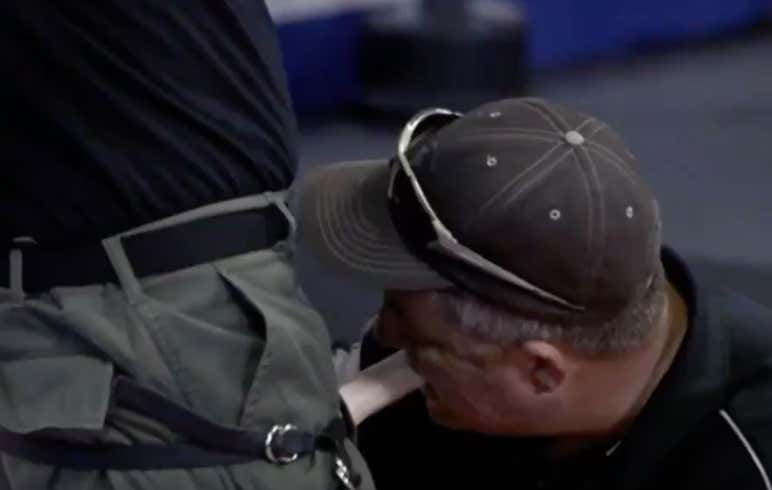 It doesn’t matter where you fall on the political spectrum you have to respect what Sacha Baron Cohen is doing with this show. He’s taking people who are wayyyy too serious about their cause and making them look like complete idiots. Which is exactly what they need.

The only thing that would make the show better is if he started incorporating some of his old characters into the show. I’d love to see some sort of John Girard/David Clarke segment. Oh well. Maybe next week.