On this episode of Julie Stewart-Drinks, we whet our palette with the sweet, sweet nectar of international booze for World Cup Szn. The United States might not be going to the big dance, but that doesn’t mean you have to suffer. That’s where Icelandic vodka company Reyka Vodka comes in who’s converting US fans to Icelandic fans. I mean, why not eh? Iceland is the smallest ever nation to make the World Cup (it’s also their first time), and as friend of the show FS1 anchor Rob Stone told us, there’s literally nothing to hate about Iceland (including the fact that they made it illegal to pay women less than men, yassss queen!)

This is just one of thirty-two countries to qualify for the World Cup, so let’s get drinking baby. 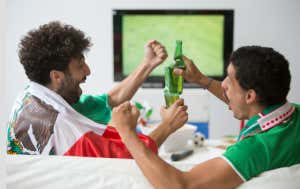 MIND YOUR BUSINESS- Sheltered In Love

Ryan Reaves Wins The Battle Of Las Vegas Tonight With A Clean 2-0 Sweep Of Nate Schmidt In...

Riggs Vs Pinehurst No. 1, 4th Hole

Remember When We Took Pills That Made Us Wanna Kill Ourselves So We Didn’t Have Pimples?

I Can't Hold Back Any Longer