That's me. Sitting on the sidelines. You're probably wondering how I got in this situation? I was voted off last episode by Sydnie, who has formed an alliance called Team Constellation (It stings harder when the name is lame as fuck.) I'll come back into the story later, for now this episode starts with some camp scheming …

The last two competitors to go home were eliminated after staying a night in the Mattress Firm Mansion. The Mansion has AC and a comfortable sleep, but when you're in the mansion, you don't have numbers, which means you don't have control. Will Sas or Smitty be the next to go home?

That all depends on who wins power of elimination at …

Competitors are submerged and locked in the double wide version of a coffin, with barely enough room to breath. To win, a player must escape their tank. In order to escape, players must collect keys off the bottom of the tank to unlock the padlocks. First person to unlock all 4 of their locks, wins.

But, first … drama. Before the match, competitors voted on who would have the least amount of air to breath in their tank. Jordyn was basically begging for Tommy to pick her, Smitty picked Tommy with a chance key flip (pussy) …

The most interesting part of this challenge was Sydnie placing her key in Jordyn's jar, meaning Sydnie was straight up going against the scrunchy gang alliance. Jordyn claimed she wouldn't forget the back stabbing, but isn't Sydnie only returning the favor?

This wasn't the first time the alliance had been questioned. Jordyn sabotaged Sydnie's fire in the last challenge, which had me questioning the simulation and thinking it was aftermath from Bri, calling Jordyn, Sydnie's puppet (read about it here).

Who is good? Who is bad? I have no clue. Sydnie putting her key in Jordyn's jar exposed her for nothing, because in the end, Tommy Smokes received the most keys, thus receiving the least amount of air.

And the person who emerged victorious after opening all 4 locks on their tank before Tommy could even open one, Jordyn Woodruff. I'm sure some people will say her method of looking at the keys in the tank was unfair or cheating, but fuck that. $25k is on line. I hope I would have been as observant. Now if I were going against Jordyn I would claim a re-do until the day I died. That's how it goes.

Winning meant Jordyn was now cock of the walk back at camp, and elimination would go through scrunchy gang for the 3rd time in a row. At camp, there seemed to be some confusion on Team Constellation as to who Jordyn should be sending home.  Luckily, Smitty was there to help the blind lead the blind…

It seems the plan is to go for the odd man out, Sas, and keep Team Constellation going into the final 4. But, if you're going to come at the King of New York, you best not miss.

Which brings us to where this blog started, me watching the drama unfold at the 4th elimination of Most Dangerous Game Show. 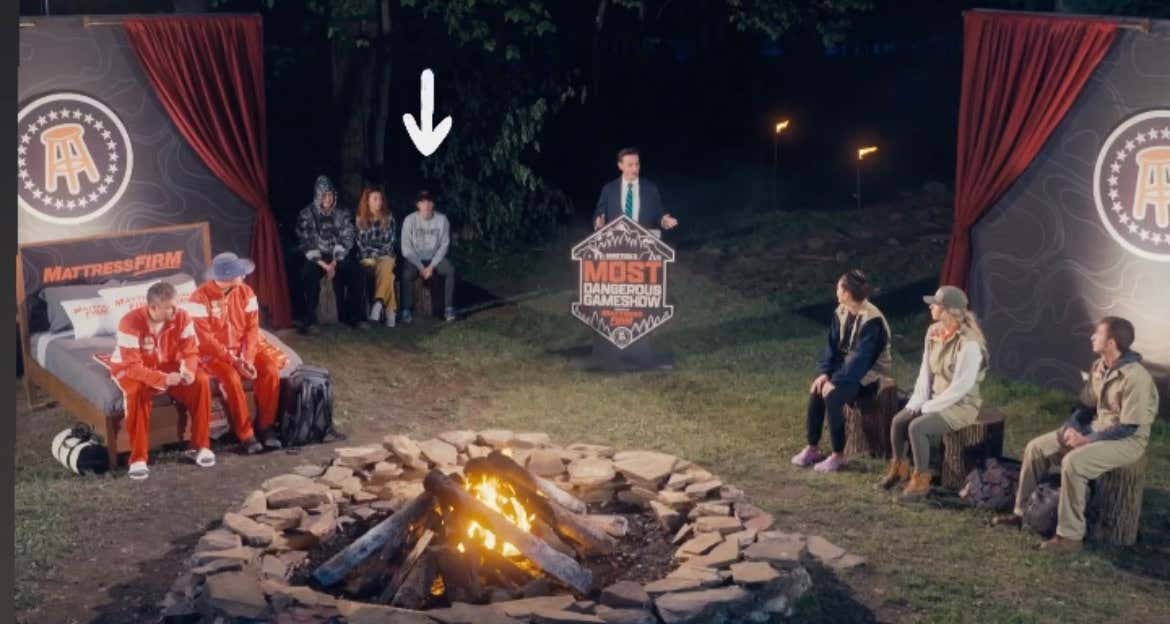 Going into this elimination I would have bet my life that it was either Sas or Tommy going home. I'd bet everyone else was on the same page as me, because this is the reaction when Jordyn decided to go against her strongest alliance from day 1, erasing Sydnie from the playing field.

I view Tommy Smokes and his play as more opossum like than snake like. Tommy's best defense is acting defenseless, but if you corner him, he can bite. Telling your friend you'd never eliminate them, then serving them their own heart on a silver platter? Definition of a snake move, and I love it. While Jordyn's chances of moving on to the final 3 decrease, if Jordyn wins the next challenge and eliminates Sas or Smitty, she will set herself up for a more winnable final - Tommy, Smitty, Jordyn.

I don't think Jordyn could have beat Sydnie in head to head votes, but beating Tommy and Smitty? That's doable. All it cost Jordyn was her strongest ally.  The craziest part about Jordyn taking out Sydnie, is Tommy's finger prints were no where to be found at the scene of the crime based on this interaction of Tommy stunned and mouthing the words "I did not do that."

Headed back to camp is Tommy, Jordyn, and Sas, while Smitty heads back to the mattress firm mansion for a lonely night of sleep.

If this is the final 4 you had predicted, congratulations, you are on some good drugs. What will happen in the finale? An elimination, a large fight, and someone winning $25k and a new bed. See you there.

The Maddening: The True Story of How Madden is Made

Who Would Win in a Fight Kirk Minihane or Chris Klemmer? - Mean Girl Pod Answers the Inter...

I Am Playing My Best Golf - Breaking 90 Episode 8

Big Cat Relives His Role In A Reebok Commercial

OOZING in SOUTH KOREA - THE BEST TRIP EVER!!!

I Hunted HUNDREDS Of Doves In Argentina With A 20 Gauge!

How a Marine is Helping His Afghan Interpreter Escape the Taliban