Everyone knows how much I love Canadian racing. They have very profitable pools and the twenty cent increment on bets. You put those two things together and you have a chance to make some real money. On Friday night I played a Pick Four which had less than $300 in live money heading into the last race and all that took was a 5-1 shot to come in. Beating the favorite is the name of the game up north.

Tonight is a HUGE night at Century Mile, my favorite small track, because they are running the Grade Three Canadian Derby in the tenth race. The other thing I love about Century Mile is how damn late they run. You can watch the Sunday Night game and still have action after. The last post tonight is 1 AM eastern! I can't wait to bet this thing all sorts of ways. In the special Photo Finish we break down the Pick Five which includes three stakes races and the Canadian Derby. I also have our Pick Four tickets posted below. Let's go north of the border and cash some tickets! 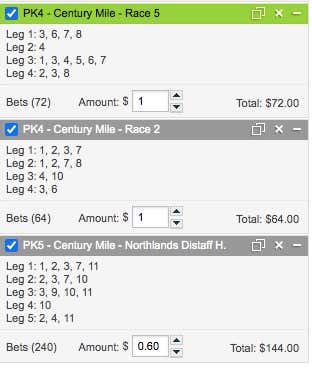 Penn State Has No Shot At Winning Nine Games This Season

Life's Too Short To Bet The Under (WK 3)

Life's Too Short To Bet The Under

What Do We Do Now?

Get Hype for Rivalry Week with This FIRE Promo Video