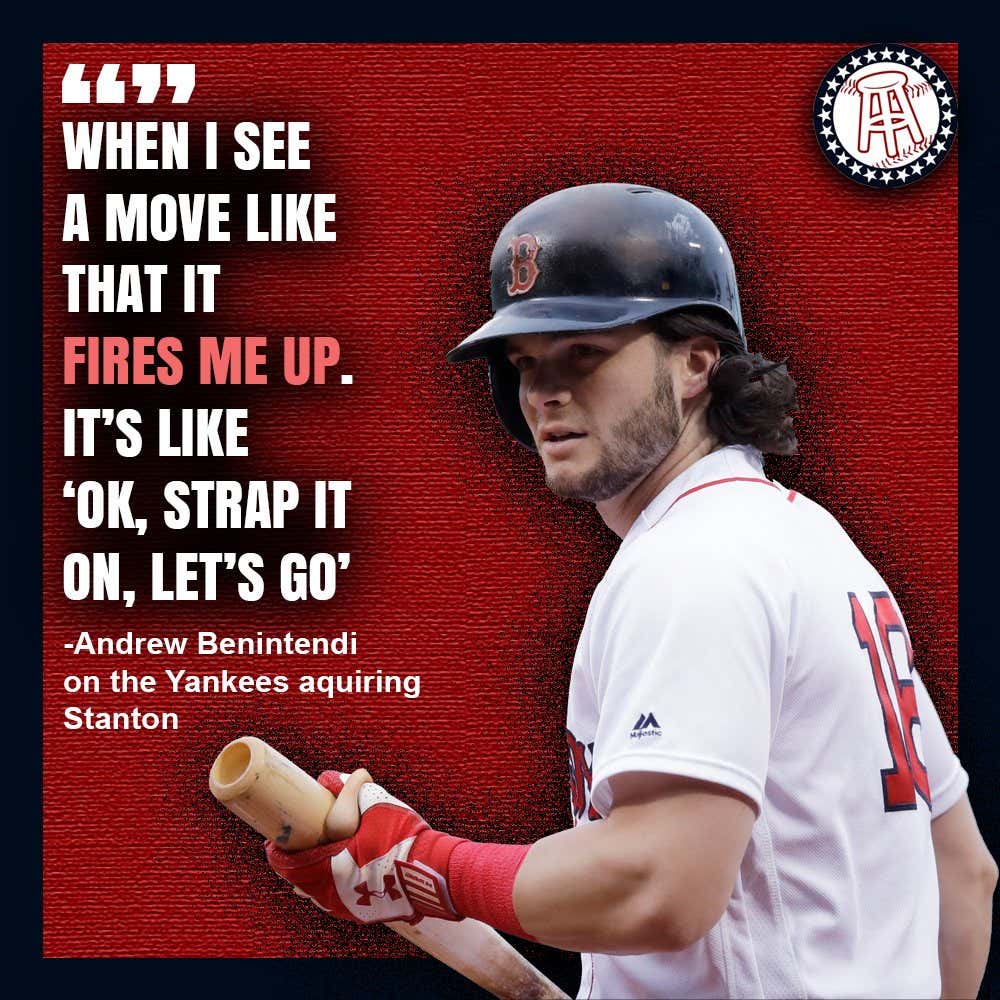 On this week’s episode of Starting 9, we’ve got a very special guest; perhaps you’ve heard of him. Ladies and gentlemen — mostly ladies — Andrew Benintendi of the Boston Red Sox. Aaron Judge took the baseball world by storm last season, but heading into 2017, Benintendi was widely considered to be the favorite for the AL Rookie of the Year award. We talk to him about his journey from being drafted in the first round of 2015, making his major league debut in 2016, to finishing runner-up for the Rookie of the Year award in 2017.

Other topics discussed with Benintendi include how much he curls, his makeup as a baseball player, if he’s talked to Alex Cora yet and how that conversation went, how he feels about Brock Holt using him for likes on Instagram, whether or not he prefers Benny Baseball or Benny Biceps as a nickname, and what his message is to Red Sox fans in the wake of the Yankees adding Giancarlo Stanton.

Speaking of that Giancarlo Stanton fella, we break down the Stanton trade to the Yankees, Stanton’s comments about the Marlins organization after being dealt, Marcell Ozuna being traded to the St. Louis Cardinals, the Cardinals’ outfield situation, Shohei Ohtani’s UCL damage in his pitching elbow, Manny Machado trade rumors, the trend of relief pitchers being scooped up first in free agency, some Twitter questions, an update on Hall of Fame ballots that have been submitted, and some major bobblehead day news. All that, and more.

Little disclaimer here for listeners complaining about back-to-back Red Sox guests — I didn’t book either of them. Alex Cora is a friend of Dallas Braden and Justin Havens from their ESPN days, and our talent booker asked us if we wanted Andrew Benintendi the following week, and we sure as shit weren’t going to turn down that opportunity. I’ve purposely avoided booking any Red Sox guests myself, because I want Starting 9 to be a show that all baseball fans can enjoy, and I make a conscience effort to save the Red Sox bias act for Section 10. GOOD DAY, SIR.