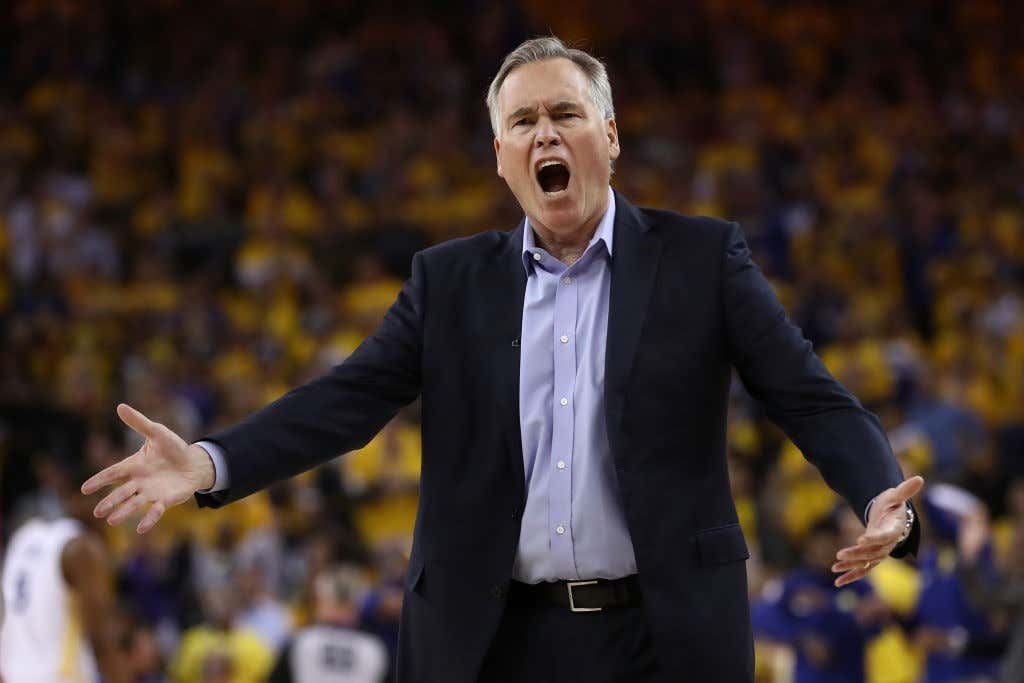 Happy Monday everybody and welcome to another edition of Last Night In The NBA where we catch you up on everything that went down from the night before in the Association. We had a common theme this weekend when it came to the NBA Playoffs, and that was teams couldn’t stop getting blown out. Whether it was the Celtics on Saturday, or the Rockets last night, for two series that were so hyped, both have been filled with blowouts through three games. None of which were as bad as what we saw last night up in Oakland, and any momentum the Rockets had after winning Game 2 is loonnnnng gone. Maybe you were watching the Billboard Awards or something and have no idea what the hell I’m talking about. If that’s the case, here’s what happened

Even this was only Game 3, it sort of felt like the series was over right? Things can obviously change if the Rockets somehow steal Game 4, but nothing we saw coming out of last night tells me that will be even remotely possible. When the Warriors go full Warriors, it truly is insane. Last night was one of those nights, whether it was the 52.2% shooting, the 13 3PM, 126 points or just 8 TOs. Obviously things start with Curry, who actually struggled in the first half, but as we know that’s why they play a full 48

This looked much more like the Curry we all remember, and for Warriors fans it has to be a welcomed sight. He hadn’t really done much this series, and you had to know it was just a matter of time before he broke off something ridiculous. Honestly we all should have known this was coming given this picture that was snagged during their Game 2 loss 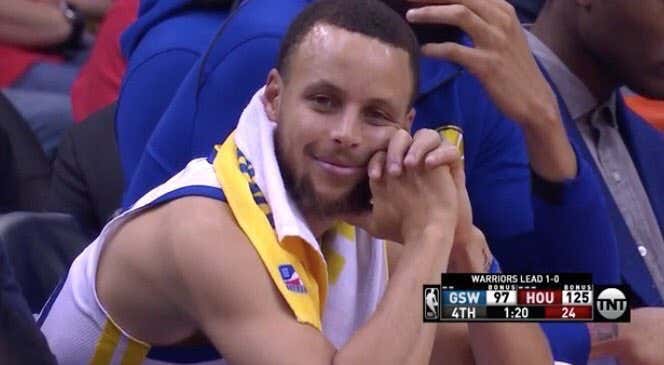 Curry knew what was in store in Game 3. This was a classic case of letting the Rockets feel confident, simply because you know the next time you play you’re going to break them. At the end of the night Curry turned in a nice 35/6 performance on 13-23 shooting (5-12 from deep). In his 34 minutes he had just 1 TO and was a +24. It really didn’t matter who you put in front of Curry, he had no issues cooking you from 30 ft, and then once the defense came out a little further to check him, boom there he was finishing at the rim. Pretty hilarious all the talking heads spent the first two games talking about how he must be hurt, when clearly he was just in a funk, something that happens to basically every basketball player ever. There was no funk in this game, and that’s a problem for HOU.

You see, when the Warriors have Curry cooking it almost makes you forget about all the other insane basketball aliens on this team. That would be silly, because Kevin Durant exists and did stuff like this

Would you believe me if I told you this was Durant’s worst game this series, and it was still 25/6/6 on 9-19 shooting? Ridiculous. Durant was the man early, as he led the game with 12 points in the first half, and as we all expected he still presents such a mismatch problem for the Rockets. Durant went 2-4 against Gerald Greem, 2-2 against Harden, 1-2 against Paul, and 3-5 against Ariza. I don’t know who else they can throw at the guy, but nobody is making even the slightest of difference. That seems like an issue. Even if the Rockets wanted to use the strategy of letting Durant get whatever and stop everyone else, that’s not smart because they are not able to stop anyone else either. Draymond did a little bit of everything,

Andre Iguudala came out of nowhere and had an efficient 10 points on 4-6 shooting, really helping Durant set the tone early, and then when the second unit came in you had guys like Shaun Livingston (9 points on 4-9) and Quinn Cook (11 points on 4-4) and be equally as unstoppable. We know that in order for the Warriors to actually lose, you need them to have self inflicted wounds, well on a night where they are getting balanced scoring and aren’t turning the ball over, there isn’t a team on the planet that can beat them.

When it was all said and done the 41 point win was the largest in Warriors postseason history. Not bad.

For HOU, what happened to the team we saw in Game 2? Well, some things carried over to Game 3, like CP3 and Harden playing like dogshit.

Together they went 12-32, and are now 27-70 over the last two games. I’m serious, those are not made up numbers. It’s no surprise they are having trouble getting past this Warriors team considering they are having to do with with basically no production from their two best players. We all hoped things were going to be different, and while Harden hasn’t disappeared AS bad as Paul, it’s still not great. Paul had had a real tough series, averaging just 17/8/4 on 40/25% splits. It doesn’t help that Curry has snapped back to life, so maybe one day Paul will. He is running out of games though.

When you come out and shoot 39.5/32.4% and turn it over 19 times, what else do you expect? We now know that when you do something like this against GS, y0u experience not only the largest loss in Rockets postseason history, but also the largest loss in NBA postseason history by a team that won 65+ games during the regular season. At least they’ll be in the history books for that! Outside of Capela, it’s hard to find a Rocket that played well, with Ariza/Tucker combining to go 4-11, then Gordon (4-13) and Green (3-10) came in for the second unit anad did way more harm than good. Gordon was a team worst -33, which looked a little different from his Game 2 where he was pretty awesome. You have to play flawless basketball to even compete with this GS team, so the fact that they came out on the road and laid an egg was less than ideal. The Rockets didn’t win one quarter, and lost the fourth 38-18. That’s the back breaker for me, it was that quarter where in my opinion the Warriors went to their last level and broke the spirit of HOU. When even the reserves are running you out of the gym, you know you have a problem.

The goal for HOU is still to just get a split, and with the type of offense they have they can turn in a game in which they get 17 3PM without breaking a sweat. It may take something that crazy to pull it off, but for the sake of entertainment I hope they do it. It will be very disappointing if the Rockets just fold it in and lose this series in 5. Show some heart for me one time.

And that’s it! You’re now all caught up with everything that went down last night in the NBA. We’re back tonight with Game 4 of BOS/CLE, where hopefully we have a competitive game. If you can’t watch just make sure to check back tomorrow for the normal Celtics blog.

last night in the nba+ 7 Tags