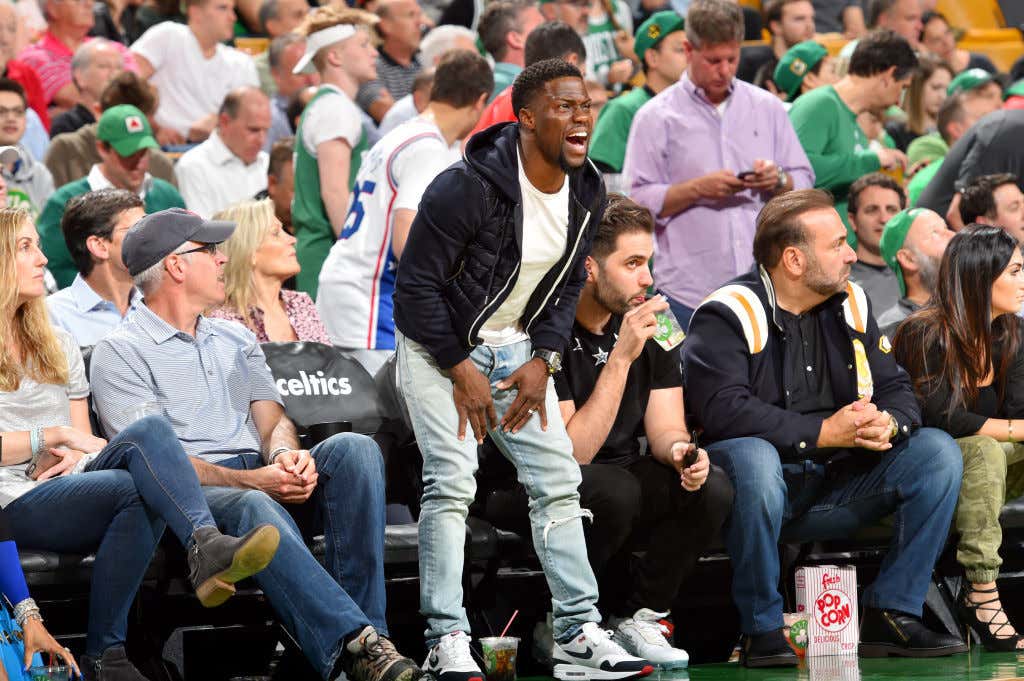 Kevin Hart is the purest definition of “when it’s good it’s great, and when it’s bad it’s awful”. Like the other week when the Sixers closed out the Miami series and Joel Embiid picked up Kevin Hart after the game like a toddler. That was a great moment. A signature moment for The Process. But just a week before that moment, Kevin Hart was the sole reason why the Sixers weren’t able to sweep the Heat. It was Kevin Hart alone who fueled Dwyane Wade’s fire in game 2 that ended with a Sixers loss at home.

And then we get to last night. The Sixers build up a 20-point lead after getting their dicks kicked in on Monday night. Everybody in Philly exhales as we collectively assume that game 1 was just an anomaly. The Celtics played great, the Sixers played terrible, but it wouldn’t happen again. Up by 20, this is the Sixers team that we expected to see in this series. Then Jaylen Brown misses a free throw and the camera cuts to Kevin Hart.

As I’m sure you’re all well aware by now, that 20-point lead lasted about as long as Rick Pitino after that. But even after blowing a 22-point lead on a night when their Rookie of the Year and superstar 6’10” point guard only put up 1 point, the Sixers were still able to climb their way back out of that hole and regain the lead.

Once again, Kevin Hart getting way too big for his 5’3″ self and just as the Sixers got the lead back, he immediately lost it for them again.

Like I said, there are moments when Kevin Hart can be great. But if you’re going to be sitting courtside as the “face” of a fanbase, well then you sure as shit can’t keep losing the game for the squad. Being there to close out Miami was a good moment for him but I mean… c’mon. The Wells Fargo Center could have been empty to close out Miami. But that is now two games in the playoffs where at least 33% of the blame has to be put on Kevin Hart’s tiny little shoulder. Probably more if we’re being honest but I’d say that not using any timeouts and also Ben only putting up 1 point hurt the team’s chances as well. But yeah. Kevin Hart is one more loss away from getting kicked out of Philly for good at this point. I’d suggest he chooses the next game he goes to wisely and maybe sits 3 or 4 rows back.

P.S. – Should parquet floors be considered a PED? I know that Ben isn’t much of a shooter to begin with but you have to imagine the parquet at least played a small role in his dud of a performance last night. It’s visually disruptive and looks terrible. You expect a guy who really doesn’t like to shoot anyway to try putting up shots when his eyes are getting fucked by the parquet all night? No chance. In my opinion, it gives the Celtics an unfair advantage and should be banned by the league.