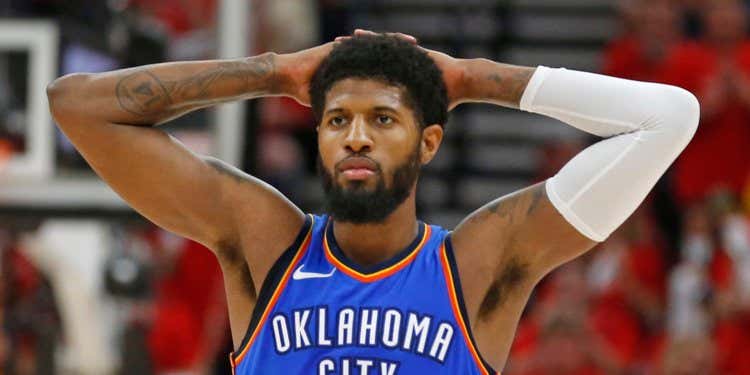 Reoccurring guest of PMT, Ryen Russillo discussed the Paul George situation recently and it doesn’t sound promising for Thunder fans. I know the press conference that George gave and even Russillo acknowledges that it sounded all great for the Thunder and he was ‘skeptical of sharing the news’ but a source told Russillo, George is ‘gone.’ Now, that most likely means that he ends up back in his hometown of Los Angeles to play for the Lakers as it was destined for years, but Russillo and his source leave the door open. The source doesn’t say where he’s going just that George is gone. There’s really only four teams that can afford to sign a player like George this offseason without doing any sign and trades, etc. That group includes the Lakers, Kings, 76ers and Pacers. He’s obviously not going to go back to the Pacers. The Kings have a chance to be intriguing down the road with the young core, but someone like George isn’t going to want to build right away. That leaves the Sixers and Lakers. Now, with LeBron rumored to be heading to Philly that most likely takes them out of the fold. However, if LeBron stays in Cleveland or goes somewhere else, George on the Sixers would be highly intriguing. He fits that wing spot that they need while keeping length and adds the ability to score and shoot. He can play off a guy like Simmons and Embiid and that trio along with Saric would be the favorites in the East most likely. Either way, free agency is one of the most intriguing times for basketball fans so we’ll see what happens here.

We’ve seen this happen plenty of times before. A head coach is brought on also as a GM/person in charge of all personnel moves and then things don’t go as planned and they are forced to give up the front office duties or both. It happened most recently with Mike Budenholzer in Atlanta and Doc Rivers with the Clippers. It’s now happening with Van Gundy in Detroit. The Pistons were unable to make the playoffs despite trading for Blake Griffin, but you may be able to chalk that up to injuries to Griffin and Reggie Jackson. Another thing to remember here is the fact the Pistons hired Arn Tellem, one of the most notorious agents in the game, to help run the business side of the Pistons as they moved into their downtown arena. Now that job is over with, the Pistons want to keep Tellem around, which could lead to a front office position. Van Gundy has one year left on his contract and I’d assume he’ll come back for the $7 million despite losing the front office job.

After the Blazers were swept by the Pelicans, rumors started to surface that Terry Stotts could be fired. Now Marc Stein is saying the belief within the coaching circle is that Stotts would keep his job – and that’s a smart thing to do by the Blazers. Stotts did lead Portland to 49 wins this year and the No. 3 seed in the West. He’s been with the Blazers since the 2012-13 season and while they’ve made the playoffs in all but one season, they’ve been eliminated in the first round the last two years. he comparison that everyone is making here is similar to Toronto. The Raptors were always a strong regular season team and then sort of got figured out in the postseason/ran into LeBron. The Raptors stuck with Dwayne Casey though and right now they have the No. 1 seed in the East and ran into LeBron again. The bigger problem with Portland was always GM Neil Olshey, who made some baffling signings and gave way too much money to rotational players that have now hurt the Blazers.

Nick Calathes plans to return to the NBA

Nick Calathes has played over in Europe since the 2015-16 season and after some big time seasons over there wants to return to the NBA. He had a wild ride during his NBA career. After being drafted 45th overall in 2009, he spent three seasons in Greece playing for Panathinaikos and Lokomotiv Kuban. Calathes came over to play two seasons for the Grizzlies where he was effective, especially when Mike Conley was injured, but was also hit with a 20 game suspension for violating the NBA drug policy. After getting a non-guaranteed deal, he went back to Greece where he was named the Best Defender in 2016 and is contention for Euroleague MVP. He has the ability to come back to the NBA and be a backup guard that can provide minutes right away. He’s not a good shooter, but is an excellent playmaker and can set up teammates along with being a strong defender. It won’t shock me to see him get signed fairly quickly.

The Knicks wrap up their coaching search

The Knicks interviewed Mike Brown to make it 11 candidates for the head coaching job. The candidates include Mike Budenholzer, Mike Brown, Mike Woodson (I think they have a thing for Mike’s), David Blatt, David Fizdale, Jerry Stackhouse, Juwan Howard, Mark Jackson, Jay Larranaga, James Borrego and Kenny Smith. Now, I’ll give the Knicks credit here. They didn’t rush anything, got a bunch of people with various levels of experience and different backgrounds. Now comes the tough part. Making the right hire. To me there are five guys that I’d be completely cool with if I was a Knicks fan. That list would be (in order) Budenholzer, Fizdale, Stackhouse, Blatt, Larranaga. I wouldn’t be upset if Howard or Borrego get hired. Clem will talk more about this, but I just wanted to put out my thoughts quickly on it as we now wait for the Knicks front office – who always make the right decision – to decide from these 11.