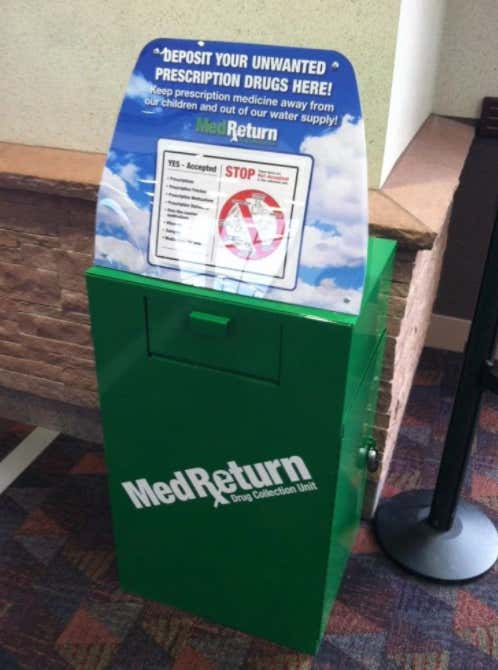 (The Sun) – If someone purchases legal weed in Las Vegas and has it with him upon arriving to McCarran International Airport, there is now a legal way to dispose of the drug before entering the premises.

The first 13 of a planned 20 marijuana amnesty drop boxes were installed Friday, with 10 bins outside of McCarran and three outside of the McCarran Rent-a-Car Center on Gilespie Street near Warm Springs Road.

Bolted to the ground and only accessible to drop items in, the bins are in high-traffic areas, monitored regularly and serviced multiple times a week.

“The drawer pulls out; you drop your stuff in and you close it. You can’t really get your hand in there,” said Christine Crews, McCarran spokesperson said. “If you start tampering with them, you’d be detected pretty quickly.”

The bins are in response to changing guidelines surrounding weed on airport grounds. The possession of up to one ounce of marijuana and 1/8 ounce of the THC equivalent of concentrates and edibles was made legal in January, with legal sale and purchase of the drug going live on July 1.

From Jan. 1 to late September, if a person had weed on his person on Department of Aviation grounds and it was discovered by a TSA agent, Metro Police would be called and they would assess the amount. If they deemed it to be under the allowed amount, the person would be given back their product and were free to go. If it was over the allowed amount they would be arrested for felony possession, Crews said.

With the county ordinance disallowing weed on any airport property going in effect in October, the rules now mirror what they were before legalization.

I get the concept of why these were made, I guess I just don’t know who they’re for exactly? If you’re sober enough when you show up to the airport to LEAVE LAS VEGAS to remember you have an eighth left then you’re probably not the type of person to have purchased an eighth in the first place. Also if you put an edible in this thing you’re the biggest dweeb on the planet. TSA is too damn busy to be running tests on your brownies to check their THC levels. You’re not George Jung, you’re gonna be fine. Or if you’re standing at one of these receptacles, mulling over whether or not you should toss an edible in there – how about you just eat it? They take a minute to kick in anyways, by the time you’re done checking your bags and reach your gate you’ll be ready to melt into your seat and wake up in Duluth before you know it.

It’s very clear to me that these were only made to essentially rob nerds of their weed. Whoever is tasked with emptying these is absolutely going to skim off the top. And by “skim off the top” I mean take 90% of the contents and report/recycle the last 10%, sorta like how Garfield cuts a cake.