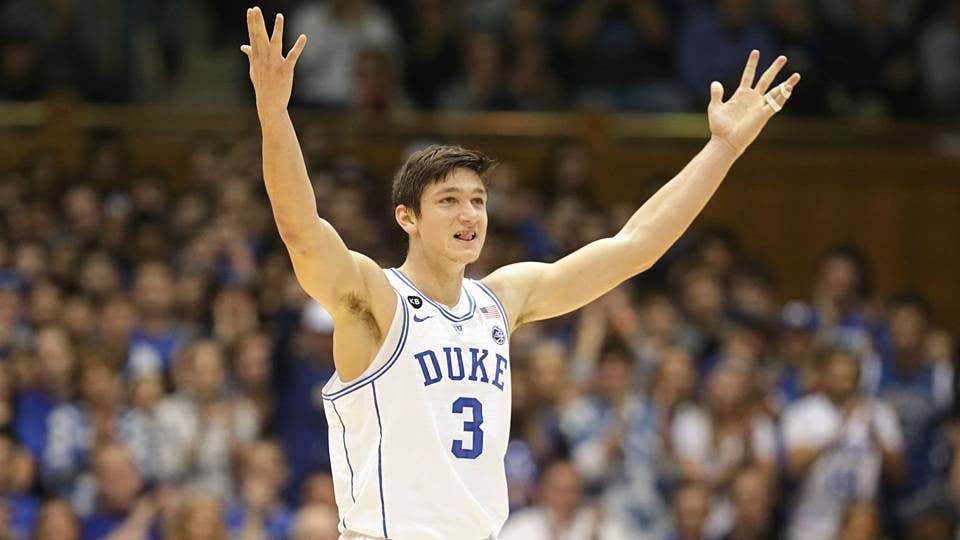 Don’t look now but Duke is starting to figure shit out. It happens to coincide with Marvin Bagley missing time due to injury. Now, if you think Duke is a better team without Marvin Bagley you are – to quote – ding dong brains. Marvin Bagley is one of the five best players in college basketball this year. Marvin Bagley single-handily won Duke games this season.

Now that’s out of the way, let’s get into what Duke is currently doing during this winning streak in which its defense has soared back into the top-30 on KenPom. There have been two main things to help with that cause. The first is K finally came out and said Duke will be a zone team the rest of the season. The reason they weren’t a zone team to start the year is simply due to arrogance, recruiting and getting guys ready for the NBA. That’s what it comes down to. In terms of recruiting, players that go to Duke, Kentucky, etc, want to play man to man because that’s what you run in the NBA. It helps with individual development even if it’s not best for the team. Duke is now almost exclusively running a 2-3 zone and in the last four games, it has held teams to an average of 58.5 points per game, with Georgia Tech being the only team of the four to score more than 60.

Then there’s the Grayson Allen factor. That’s the other thing everyone wants to talk about during this four-game stretch. Grayson Allen has gotten back to sophomore year Grayson Allen, which is All-American type play. He’s scoring 24 points per game while shooting 41% from the 3-point line. Throw in the Michigan State game where Bagley played just 10 minutes and he’s averaging 26.4 points per game and shooting 46% from three. Those numbers are just flat out absurd and reminding everyone why a lot of people had Allen as an All-American the last two years. So what exactly is going on with Grayson?

Well, first, Duke is putting the ball back in his hands. They are letting Allen be the lead guard instead of Trevon Duval and it’s getting Allen back into a rhythm. This was the smartest thing K could have done on the offensive side of the ball. Duval has struggled this year and team’s are just daring him to beat them. It’s not working. If you dare Grayson to beat you, he will. Hell, he beat Michigan State by himself essentially. Moving Duval off the ball let’s him attack catching and attacking as his defender cheats. It lets him cut and let Allen make the pass instead of vice versa. The other thing here is without Bagley, the floor is more open. When Bagley is on the floor, Duke likes to run a hi-lo set with him and Carter or ISO him in the post. The ball can stick and lane gets clogged. With DeLaurier, you can spread the lane out more and it lets Allen attack.

Bagley is expected back at some point here. While Duke has been hush hush on his injury, he was warming up and getting shots in last night and I’d be shocked if he continued to sit out. Again, Duke is a better team with Bagley on the floor, but it will be interesting to see how the dynamic changes when he gets back. Duke will continue to run zone, but will it be as effective (it should)? Remember, we’ve seen Bagley defend at a high level against the likes of NC State and Miami. Offensively, will we see Allen continue to attack the way he does. He likely won’t continue to put up 26 points per game, but he’ll be the lead guard again. That’s the important change that needs to be there offensively. You can continue to play through Bagley and Carter and let Allen control the outside. Teams have to decide where the double is coming from and as long as Duval is playing within himself, you have threats in Trent and Allen shooting.

So, now, for the third year in a row, we’re officially back to asking is Duke #back?